Smith Beats Drum as He Cycles for Smarts

YOUNGSTOWN Ohio – Douglas Smith could be forgiven for being eager to get into one of the boxes of doughnuts following the Smarts Community Arts School’s news conference Monday morning.

He’s going to need the carbs.

Smith, former owner of The Drum Smith in Struthers, this week will embark on a 3,400-mile, cross-country trek on his bicycle.

The objective of the trip, which will take Smith from Astoria, Oregon, to Virginia Beach, isn’t just to cross an item off his bucket list. His “Going the Distance” campaign aims to raise funds and awareness for Smarts, which offers community arts programming locally.

Smith, who has been planning the cross-country trip for a couple of years, decided he should make the ride “benefit something,” he said.

“It was something that Doug wanted to do once he retired. He’s a great fan of Smarts and the work that we do in the community. So it made sense to do it for a cause,” said Becky Keck, Smarts executive director.

“Smarts was the obvious choice for me,” Smith affirmed. He had done several promotions with the community arts school and Keck over the years.

“I’ve been a musician all my life, and I know from personal experience what music education did for me as a youngster,” Smith said. “It’s been amply proven that art and music education is extremely beneficial to everyone later in life, whether they pursue a career in art or music or not.”

The goal is to raise $35,000 to support free public programming, Keck said. “He’ll be riding his bike about 60 miles a day for about nine weeks,” she said. 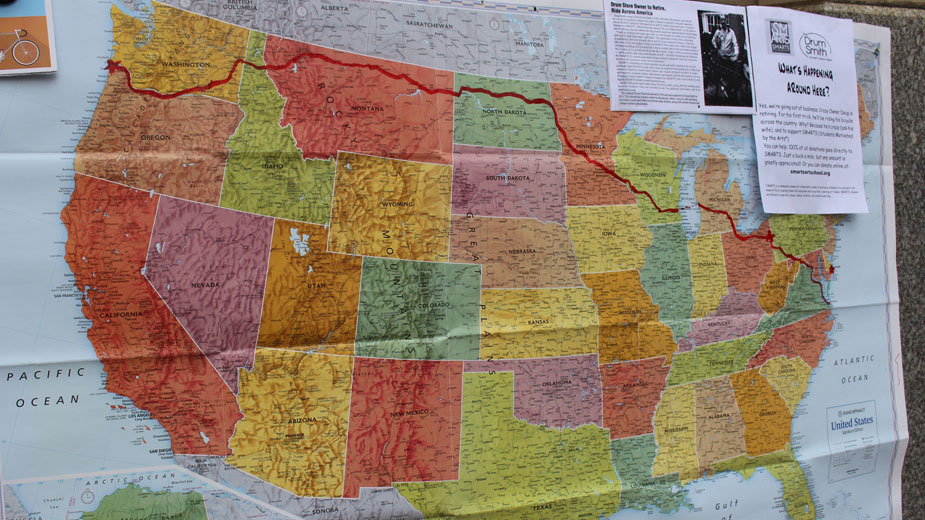 “You don’t have to buy just one mile. You can buy 100 if you like,” he said. Corporate sponsorships also are available.

The journey will take Smith through 13 states, including a planned Aug. 1 pit stop to celebrate his 61st birthday, before reaching his final destination at Virginia Beach, he said. He will cross Lake Michigan by ferry and may take a brief detour across the Canadian border.

“I have friends across the country and relatives on the West Coast in Portland and Spokane. There’s a fairly famous road among touring cyclists called the Going-to-the-Sun Road in Glacier [National] Park,” he said. He also has friends in Wisconsin and across Michigan, we well as farther east.

Smith will fly west Tuesday and begin his cycling tour Thursday, Ragan said. Spectators will be able to track his progress on the Smarts website and platforms on Facebook and Instagram. Viewers can watch video from the GoPro camera he’ll be wearing during the ride.

Smarts will update Smith’s location by painting his route on the glass window at the front entrance to the school on the first floor of the Ohio One Building at 25 East Boardman St.

“It’s going to be kind of fun to chart Doug’s progress,” Ragan said.

Smith will keep a journal and post his thoughts at www.crazyguyonabike.com. “We’ll be pulling from that information and trying to keep everybody abreast as much as possible during his trip,” Ragan said.

At the end of Monday’s news conference, Smith was given a parting gift – an envelope filled with restaurant gift cards.