From the Local Farm to Your Table

When brought out to the table, the dish looks like a work of art and everything you could ever crave for breakfast – two buttermilk blueberry flapjacks, adorned with two eggs, fingerling potato home fries, toast and thick-cut bacon on the side.

What’s more important than how the food looks, of course, is how it tastes, where the food is coming from and how it was grown or raised, says Canzonetta, owner of the restaurant inside the DoubleTree by Hilton.

“Our goal is to have 65 to 70% of our menu sourced from local farms,” he says. “If I get a pig that’s been raised in a natural environment that eats well, sleeps well and drinks well, these are happy pigs. And happy pigs make great meals.”

The Bread Chef in Boardman provides the bread Canzonetta serves and when blueberries are in season beginning the end of June, he will source those, for his flapjacks, from Molnar Farms in Poland.

Right now the Bistro is using strawberries from Molnar Farms for its pastries. This month, when workers at the farm are harvesting its sweet corn, tomatoes and peppers, Canzonetta will use the produce for various dishes.

“We’ll start incorporating those items into our core menu and we’ll start running features based around those local options we have for produce,” he says. “We use corn in a lot of fresh salsas here and I’m going to feature Molnar’s corn as an appetizer. And in my crab cakes and in pasta.”

The eggs he uses are from Lamppost Farm in Columbiana.

“When you use those high-quality eggs, they’re higher in niacin, higher in everything across the board and lower in cholesterol,” Canzonetta says. “The eggs are phenomenal.”

“When you see it growing and you see it walking around in the pasture, you know it’s going to be a great product,” Canzonetta says. “I visit the farms and see exactly what they do.”

Canzonetta emphasizes that he buys produce and meat from local farms that are non-GMO because of health concerns that he believes originate with consuming genetically modified food.

Buying local is important to him for the sustainability of the local economy as well.

“We want the money to stay in the communities for our taxpayers because that increases the ability to build new schools, to have better roads, to have a better educational system,” he says. “All those things trickle down when we’re supporting local.”

Steve Montgomery couldn’t agree more. Every morning at Lamppost Farm, he moves his 70 cows to a new section of pasture on his 131 acres of farmland so they can graze on fresh grass.

“We move them around so they’re eating some of the things out of the ground – grass, bugs – but then they’re not moving in their own manure,” Montgomery says. “It gives us a higher quality product that’s ecologically healthful and healthful for us because they’re consuming the sunlight power in the grass, and the fats of pastured meats are fantastic.”

Montgomery does the same for his chickens, pigs and turkeys.

The cows are Devon cattle that are calved and finished at the farm. It takes two years before they are sent to a processor in New Wilmington, Pennsylvania. 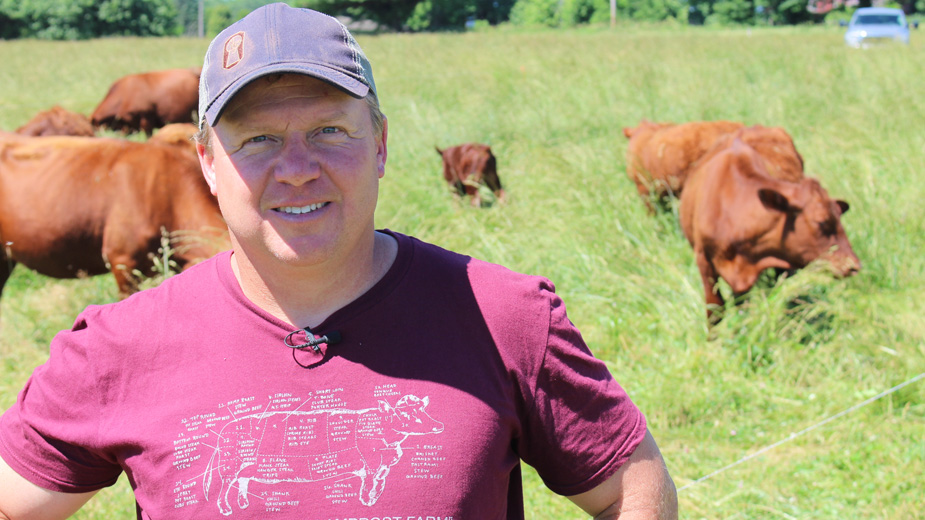 Pictured: Steve Montgomery stands in front of the Devon cattle at Lamppost Farm.

“We want animals to fatten on grass only and that’s what the finish is. So there’s both flavor and nutrition in that fat,” Montgomery says. “Good quality animal fat is highly nutritious.”

Its egg-laying chickens roam freely through the pasture and follow the cows around to “clean up after the cows,” he says.

“They eat the fly larva that’s in the manure and also scattering all over eating the bugs and flies,” Montgomery says. “We get the byproduct of that, which are these incredibly rich eggs with yolks that are an inch high and a deep yellow in color.”

Lamppost has 100 egg-laying chickens that all together produce around 3,000 eggs a year.

Each week, the farm delivers between 10 and 20 dozen of the eggs these chickens lay to Bistro 1907.

Besides selling the beef in its store on Saturdays, Lamppost Farm sells ground beef to restaurants such as Homestead Kitchen & Cocktails in Columbiana.

It also provides its meats, including lamb and microgreens, to The Kitchen Post in Youngstown, Michael Alberini’s Restaurant in Boardman, and Village Pump in Canfield and grows hops for Birdfish Brewing Co. in Columbiana and wheat grass for Orange Avocado in Boardman.

“We’re thankful to work with a lot of restaurants in the area,” Montgomery says. “The chefs are like artists who take our product and make something really special out of it.”

Catullo Prime Meats in Boardman has sourced some of its meat from Lamppost Farm, Montgomery says.

“People have taken a harder look at their food. And that’s been a big benefit for us,” owner Danny Catullo says. “We care how the animal has been fed, the quality of the breed and putting something in our store that we would be proud to put on our own dinner table.”

Catullo Prime Meats is a third-generation family business that specializes in local beef, pork, hand-cut steaks and chops and making its own burgers and sausages.

The store has been buying its grain-finished, USDA prime and organic beef through Mahan Packing in Bristolville for 30 years, which is the same way Catullo’s grandfather bought his whole beef when he started the store.

“It’s more expensive to buy grass-fed beef. But we want to provide both options for our customers,” Catullo says. “A cow eating only grass as opposed to corn is going to have fat that is more watery and has a bolder taste to it like elk.”

For its pepper-steak burgers, Catullo Prime Meats buys its peppers from Molnar Farms, and its blueberries from Zaney Pearl Farm in Leetonia for its blueberry sausage.

“As I’ve taken over the store, I find it important to have a relationship with the farmer,” Catullo says.

The store also sources its own products, such as a special meatball mix, for restaurants. Among its customers are V2 Wine Bar and Trattoria, Scarsella’s Restaurant and Cassese’s MVR in Youngstown.

“Its not a major part of our business. But we like to find places that care about quality like us and are comfortable having our meat on their menu,” Catullo says.

Badurik’s sells beef, pork, poultry, lamb, ham, and has more than 20 flavors of burgers, 20 flavors of sausage and four kinds of kielbasa it smokes in its smokehouse.

Owner Steve Badurik has been in the industry since he was 15. He opened Badurik’s Butcher Block in 2009. 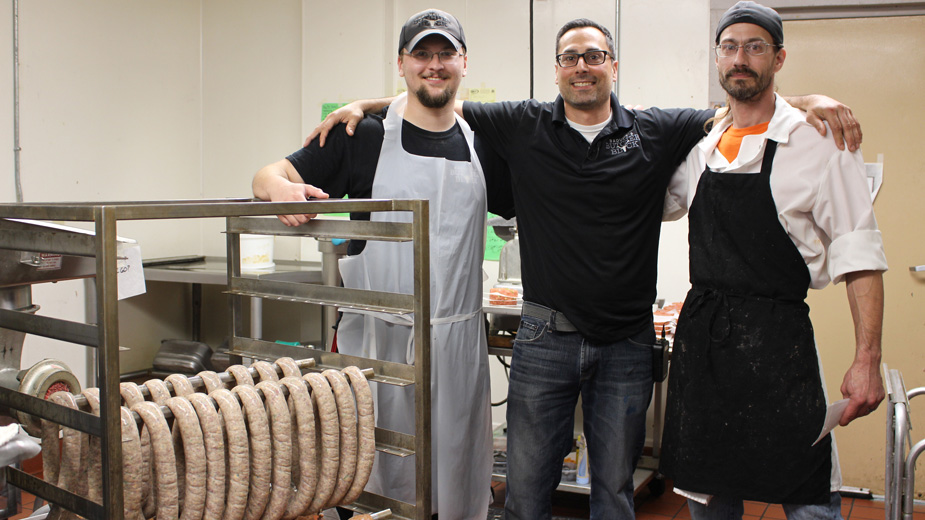 When picking out his meats, he looks for the age of the product, what the animal ate when it was raised and how it was raised to make sure it’s a quality product.

“Any time beef is under stress, it’s going to be a tougher product. So you don’t want any of that beef under stress during the process,” he says. “People are more conscious about what they’re eating and they want a good quality product.”

Badurik buys most of his poultry from Imler’s Poultry in Duncansville, Pennsylvania, and his beef from Mahan Packing in Bristolville.

“A place like Mahan’s gets their meat from local farmers or an auction,” he says. “They know what to look for when they’re buying beef or sourcing a product.”

Badurik sells a considerable amount of its ground chuck, ground beef and other meats to The Upstairs and Saadey’s Place in Youngstown.

Nicole Richards, owner of GardenView Acres in Youngstown, is looking to diversify her operations by getting her produce into a restaurant close by.

“Since we have 1.5-acres, we’re small. So in the past, we really hadn’t looked at restaurants,” she says. “But we could work with a restaurant that would be willing to work with us on specials or we could grow unique produce for them.”

GardenView Acres is an urban farm where Richards and her husband, Richard Price, grow vegetables on half an acre on the north side of Youngstown and one acre on West Dennick Avenue. 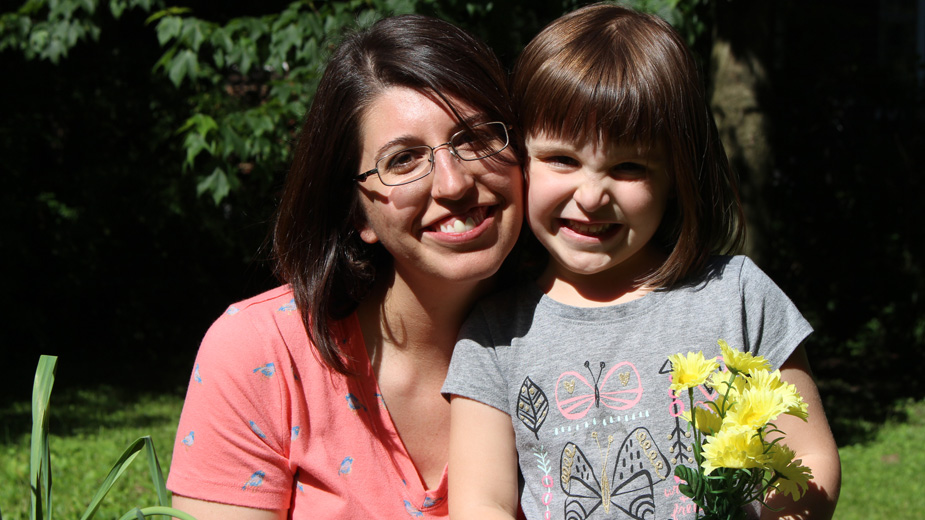 GardenView specializes in growing non-GMO hot peppers, which include ghost, scotch bonnet and habanero peppers. And a variety of tomatoes, such as heirloom, Kellogg’s breakfast, San Marzano and mortgage lifter tomatoes.

Richards also grows a general mix of cucumbers, pickles and squash. She applies no pesticides on the produce, using only organic fertilizer from Ohio Earth Foods that is approved for its organic program.

With farmers markets in flux every year and some closing, such as the Idora Neighborhood Farmers Market, Richards wants to sell to a restaurant.

“Since we’re growing on a smaller scale, we can grow different things that big farms can’t grow,” she says. “It’s really fresh and it’s a quality product. It’s less than a day out from the ground because we’re picking it and it’s only going from here to down the road.”

Pictured at top: Steve Montgomery kneels in front of the Lamppost Farm chicken coop on the farm.