YOUNGSTOWN, Ohio — After a month of bidding, the auction for the iconic Golden Dawn restaurant has closed and the bar that shut its doors nearly two years ago has a new owner — aa member of the family that established the restaurant in the 1930s.

Shortly after the auction ended, WFMJ reported that John Naples, son of the late Ralph Naples Sr., entered the winning bid. “I can neither confirm nor deny” the report, said Jeff Byce, real estate broker, auctioneer and founder of ByceAuction Ltd., Wednesday afternoon.

Subsequent reports quoting Naples confirmed that he is the high bidder. As of this posting, The Business Journal was unable to reach him for comment.

The restaurant closed after the elder Naples died in 2016, and the estate was tied up in Trumbull County Probate Court.

Contracts for the sale will be signed and presented to attorney John Grundy who was appointed administrator of the estate of Ralph Naples Sr.

Since online bidding began on Feb. 7 with an initial bid of $50,481, four of five registered bidders placed 23 bids on the property that includes the restaurant, Byce said.

The parcel with the restaurant at 1245 Logan Ave. includes all contents, furniture, fixtures and bar inventory at the time of sale, as well as the three-bedroom attached apartment. The restaurant features seating for 76, bar seating for 19, a fully equipped kitchen, full basement, a separate apartment upstairs and a paved parking lot.

Byce isn’t surprised that the auction went as well as it did, he said. “It’s a complete turnkey business with the equipment and contents included at time of sale, as well as an option on the liquor license,” he said.

“We are very pleased with the level of interest,” he said. “The excitement created by the fact that it was the Golden Dawn really got the word out there about the auction. As an auctioneer that owns a building on Wick Avenue on the north side, I’m looking forward to it hopefully reopening and being a vibrant restaurant again.”

Other lots associated with the Golden Dawn auction include three rental/investment properties on a lot at 12 Arrow St., and seven investment/rental properties and a vacant parcel on Logan Avenue, Kensington Avenue, Saranac Avenue and Bryson Street. The Arrow Street lot received six bids between three bidders with the winning bid of $13,480 placed at 4 p.m., made by the same bidder who won the restaurant property.

“Those three properties are adjacent to the Golden Dawn. So it makes sense that if you’re going to buy the bar, you would want those three houses,” Byce said.

The other properties received only one bid of $38,256, placed by another bidder.

Another high-profile property on the north side of Youngstown is now accepting bids at ByceOnline.com. The former Centenary United Methodist Church at 1413 Belmont Ave. is being auctioned, with final bidding scheduled for March 28 at 4 p.m. As of this writing, no bids have been placed.

Built in 1940, the nearly 11,500-square-foot, two-story building includes a partial basement, paved parking lot for 30 vehicles, 167 feet of frontage on Belmont Avenue and 144 feet on Fairgreen Avenue. The opening bid is set at $25,000. High bidder will have the option to purchase a vacant parcel of land directly north of the church property. 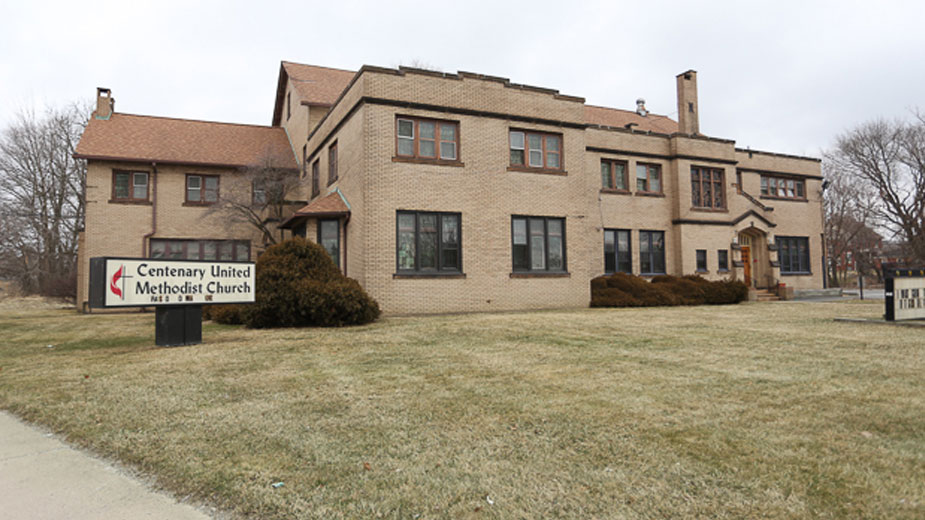 “We have gained a significant amount of experience selling houses of worship, thanks to the valued clients who have engaged our services over the years,” Byce said. “This is a very nice property, as it is zoned Mixed Use Commercial and it is in a growing business district. It would be ideal for someone who wanted to live on the second floor and use the first floor as a commercial space.”

The property is open for preview and inspection on March 10 from noon to 1 p.m., March 18 from 4 to 5 p.m. and March 28 from noon to 1 p.m. A separate online auction for the contents will be scheduled later. Visit ByceOnline.com to bid.