Golf Courses Here Are on Par with Best

YOUNGSTOWN, Ohio – Whether it’s a tough drive, a picturesque view or notable piece of history, golf courses in the Mahoning and Shenango valleys offer some highlights that keep players coming back, either for the challenge or sheer pleasure.

According to the Ohio Golf Guide website, the Mahoning Valley is home to more than 50 courses among Mahoning, Columbiana and Trumbull counties. Mercer and Lawrence counties of western Pennsylvania host another 25.

Some of the courses in the region have served golfers more than 100 years, making updates along the way but maintaining the historic nature of the course. Others have been family-owned for four generations, giving rise to memorials and traditions that have been passed down.

For this issue, The Business Journal visited a few of the golf courses to learn what distinguishing characteristic sets them apart from the rest.

Golfers looking for a challenge find it at Trumbull Country Club, whether shooting from the par-70 championship tees or the par-73 ladies tees. What won’t be a challenge, says General Manager Andrew Tuzzeo, is getting a tee time.

Members enjoy a strict “no tee time” policy, allowing them to walk onto the course and play as they please, Tuzzeo says. With a membership of 300, maintaining tee times wasn’t really necessary, he says.

“The busier courses need the tee time system, but we’re more of a slower course,” Tuzzeo says. “[Tee times] became inconvenient for our members and not really necessary. So we did away with it a few years ago and it’s worked out well.”

The PGA golf professional at the club, Mike Shulas, sets each player’s starting point to ensure she can play the round at her own pace and be finished when needed. So, “if a player needed to golf at 1:30 p.m. or needed to be done by dinnertime,” Tuzzeo says, the club can accommodate that.

Trumbull also did away with cart fees, so members can “golf as little or as much as they like,” he adds.

Trumbull Country Club features four sets of tees – championship, men, women and seniors – with distances between 5,631 to 6,304 yards, depending on the preferred tee.

The distinguishing characteristic at Youngstown Country Club isn’t a specific hole or view. Rather it’s the effect it’s had on the industry. An effect that began when Col. John Morley was hired in 1912 to grow vegetables for the club.

“The manager at the time thought it’d be neat to have a garden out here on Logan [Way] as a way to show that we were doing things fresh,” says the general manager, Anthony Palumbo.

In 1913, Morley, a native of England, was promoted to course superintendent. After touring some 100 courses, he implemented his own set of standards in the upkeep of Youngstown Country Club. Among the unique, Palumbo says, was Morley’s use of charcoal when developing the greens. The charcoal helps the green retain moisture in the offseason and adds nitrates to the soil to help the grass grow in the spring, he says. 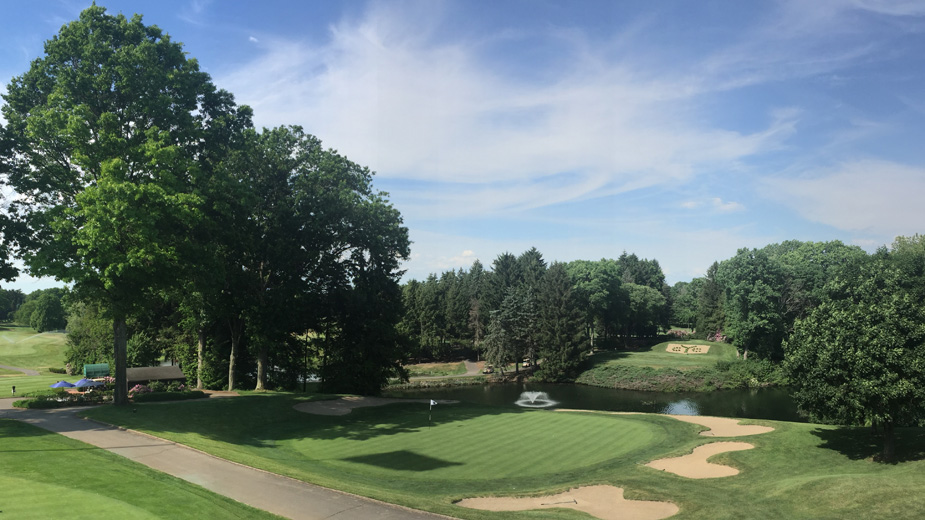 Pictured: Youngstown Country Club was among the first to treat its greens with charcoal.

Morley helped found what would become the Golf Course Superintendents Association of America in 1926 and served as its president for a decade. The practices he established at Youngstown Country Club became the national and global standards for the industry at the time, Palumbo says. Today, the GCSAA presents the annual Col. John Morley Distinguished Service Award to those who have made “an outstanding contribution to the advancement of the golf course superintendent’s profession.”

Morley retired in 1943 and the process began to place the course on the National Register of Historic Places, Palumbo says.

One particularly picturesque green is the ninth hole – a 140-yard par 3 with a tee shot over a body of water to the green flanked by a row of trees and the clubhouse, “so you have a spectacular view coming into the green,” he says. Sand bunkers surround the green and Palumbo cautions players about the steep slope at the front.

“If your ball rolls downhill, you’ll have a blind pitch shot to the green,” he says.

When Pine Lakes Golf Club in Hubbard started to renovate its course with the goal to eventually build some residential properties, some of the holes got modern makeovers. Upgrades such as larger greens, longer holes, deeper sand traps and some water hazards were important to the course that opened in 1927. But PGA Director of Golf Chris Carfangia wanted to maintain much of the course as he played as he grew up.

“It’s all about giving someone that Old World charm and new designs as well,” he says.

Half of the holes got a redesign, he says. Among them was the 16th hole, which golfers christened The Saucer Hole because of the bowl-shaped green. Before the redesign, as long as a golfer made it to the green, the shape allowed the ball to roll to the center of the “bowl” near the cup.

“That hole has had more holes-in-one than any hole in this area,” Carfangia says. 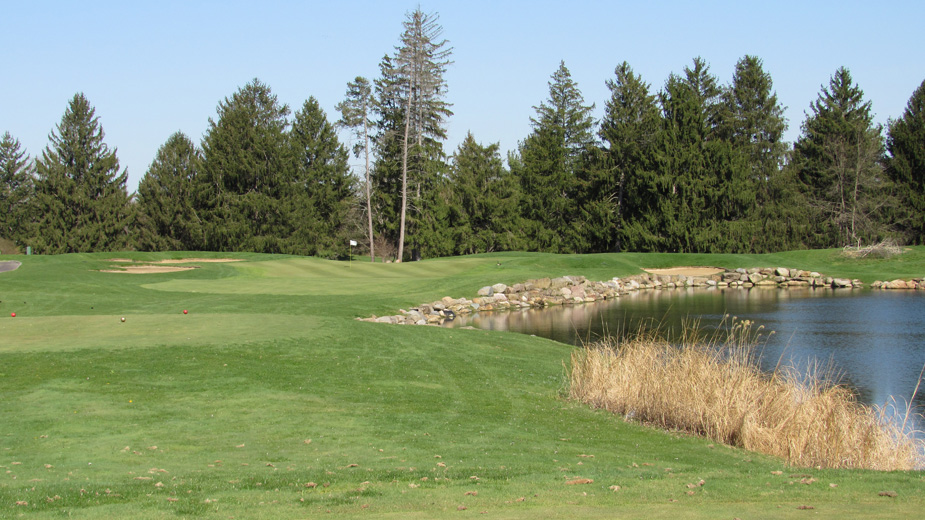 Pictured: Renovations at Pine Lakes Golf Club have resulted in a mix of historic and modern holes.

Today, the front of the redesigned green is bowl-shaped, but it presents more of a challenge than a benefit by pulling shorter shots farther from the cup. The two-tier design has a flat back, and at 9,000 square feet, is four times its original size and protected by sand bunkers.

What was once a 116-yard drive from the white tee has become 156 yards, guarded by a 25-yard-wide pond that stretches along the right side of the hole.

A quick ride in a golf cart to where the original saucer hole was finds the area overgrown with foliage. The family of a Campbell resident committed the man’s ashes to the space where he had scored the only hole-in-one of his life. Carfangia says there have been talks of recreating the saucer hole on 16 because those who remember it still talk about it.

“The old timers still really love the hole,” he says.

Riding along the cart path of the fifth hole at Salem Golf Club, you can feel the breeze from the ever-present wind tunnel of the par 3 hole. The swirling wind abruptly stops when you reach the tee box, making it an unseen hazard until it takes a golfer’s tee shot, says the PGA professional at the club, Tom Atchison.

“Guys say it feels like No. 12 at Augusta [National Golf Club],” Atchison says.

But in lieu of the creek that protects the green of “Golden Bell” at Augusta, a steep drop separates the tee box from the green 145 yards away. No. 5 is one of the original nine holes for the course designed in 1921 by William Herbert “Bert” Way, an English golf course designer. Way designed several courses in Ohio, including the southern course of Firestone Country Club in Akron, which has hosted three PGA Championships. 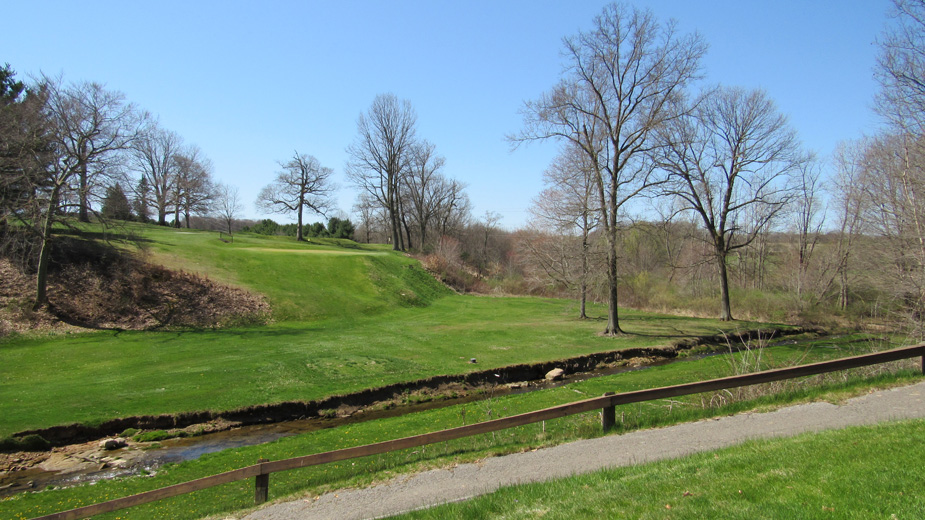 The course also hosted President Warren G. Harding, who was a close friend of former Salem News publisher Louis Brush. After a round of golf with Brush and Joseph Kelley, a scratch golfer, Harding presented Kelley with his MacGregor putter. The wood shaft club is on display in the restaurant of Salem Golf Club.

In full bloom, hole five is “scenic and pretty,” with azalea bushes planted along the back and side of the tee box. However, those flowers help mask the most notorious feature of the hole.

“Golfers don’t feel the wind on the tee” but it affects the ball, he says. Tee shots that don’t clear the ravine leave golfers with a tough chip shot to the elevated green, if they don’t end up in the small creek at the bottom.

One can only appreciate the challenge of this 110-yard par 3 by standing at the tee box and observing (where the fairway is supposed to be) a large gorge separating the tee from the green. From the women’s tee box, the land immediately drops to form a deep ravine that extends past the green on the left and right. The only level-ish land between the tee and the green is the cart path that winds steeply to the other end of the hole.

“Death Valley” is Tam O’Shanter’s destination hole, says the owner and PGA director of golf, John Kernis. Playing up the somewhat macabre name, staff added a Wild West-style burial site to the right of the tee box, complete with ramshackle covered wagon and pair of golf-shoed legs sticking out from the ground. The hapless golfer is marked with a tombstone that reads, “Tam-O-Shanter’s famous Death Valley Hole, known for the many good scores that died in its depths!” 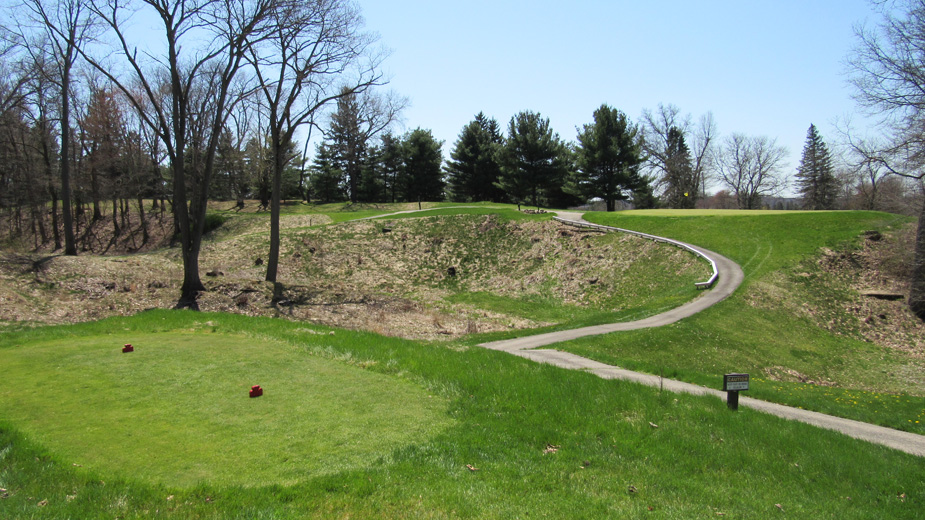 Pictured: A gorge at “Death Valley” at Tam O’Shanter separates the tee box from the green.

Among the scores claimed was Arnold Palmer, who played the course as a teenager, Kernis says. Palmer took a seven on the hole.

“He hit it down into the gulley and couldn’t get out,” Kernis says. While it would be possible to get out with an iron, most players take the hazard penalty, he says.

Other features on 14 include a championship-level tee box installed three years ago, which extends the hole to 210 yards. The tee is reserved for tournament play and is the only championship tee on the course. In 2010, after the death of Kernis’ father, Jack, a memorial was installed near the green on 14 with a bell that may be rung by any player who birdies the popular hole.

Pictured at top: Trumbull Country Club, a members-only course, did away with tee times years ago.