Smith Tells Readers How to ‘Speak Like a Pro’

COLUMBIANA, Ohio – As Kallie Rogers prepares herself for a national speaking competition in May, she attributes her success and bright future on a chance meeting with a local business owner and author.

Rogers attends Logan University, a private chiropractic and health sciences institution in St. Louis. In April, she won her school’s Talk the TIC – an industry-focused speaking competition where participants give a five-minute presentation on chiropractic care as if speaking to a layperson.

She spoke to a crowd of 50, 10 of whom were competitors. She’ll travel to Atlanta for the international competition on May 18 at The Rubicon Conference where industry professionals can hear her speak.

“I’m super excited. …It gives me so many more opportunities to go out and get my voice heard,” she says. “I’ve been saying [the speech] to myself every day. I want it to be where I don’t have to think about it.”

In 2015, Rogers met Greg Smith while having dinner with a friend in Boardman. She is from New Middletown, was between jobs at the time, and she knew Smith from the local Toastmasters club. After meeting with Smith, she agreed to work with him on her communication skills, specifically how to structure a speech, she said.

“He really helped me to organize my thoughts and generate an idea and build a speech around that,” she says.

Planning a speech around a central theme is one of the key topics that Smith writes about in his book, Speak Like a Pro Without Looking Like a [email protected]$$, released today. Smith, chairman of Compco Industries in Columbiana, says the book helps people prepare for public speaking, whether it’s their first time or they are seasoned veterans. 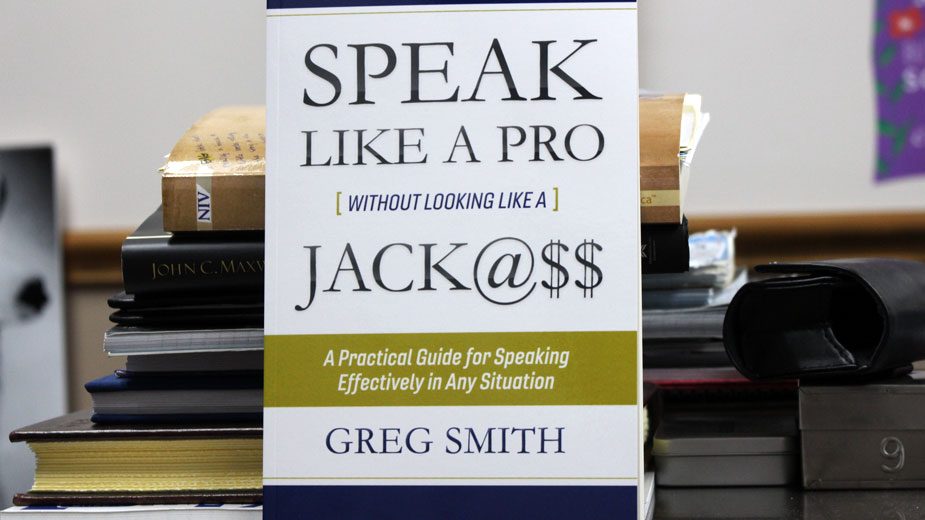 “I’ve discovered how powerfully communications skills can impact a person’s personal and professional lives and I felt an overwhelming need to share what I’ve learned with as many people as I could,” Smith says.

Many of the skills he learned from these trainers he’s included in the book, including tips on physicality, breath, planning and emotional control, the latter of which can affect how a person looks while they’re speaking, he says.

Emotional control lets speakers focus on what they’re speaking about “and be completely present,” which is important, Smith says. Failing to do so can send the audience mixed messages that can detract from their confidence in the speaker and what he is saying, Smith said.

It’s something that Smith himself struggled with. He recalled a time in high school when he tried asking a girl to prom. Despite practicing the words multiple times, when the moment to ask finally came he kept his back turned to her.

“That didn’t work too well,” he says with a laugh. “So I learned that physicality and voice, how you use your voice, are extremely important.”

Planning a speech is critical, especially when it comes to business communications, he says. Too often, speakers will focus more on trying to be liked rather than communicating a clear and thoughtful message that is well planned.

“They want to be impressive, they want to feel that the people enjoyed them,” he says. “Honestly, that’s not important. It’s [important] that they understand you and you engage them emotionally.”

“I loved his [Smith’s] ability to captivate the audience with his story telling,” Wood says. “We just struck up a conversation that turned into a friendship.”

In 2016, Smith volunteered time with the recruitment team at the station and provided some public speaking technique workshops. He taught them to use their personal experiences and stories to engage recruits rather than using just benefits information. It’s something that helped Wood and his team attain “a higher level of public speaking,” he says.

“Now I’m trying to connect with 17- to 18-year-old men and women where I can relate and speak at a level we can all understand,” he says. “Sharing my experience, my story, with them helps to make that connection and build trust with them.”

Since employing Smith’s techniques, recruiters are more engaged with high school students when speaking and the high school applicant rate has increased year-over-year by 15%, Wood says.

Smith started work on the book in March 2017 with Vince Bevacqua, owner of VLB Consulting and former WYTV Channel 33 news anchor. Bevacqua works with Smith on his communications and leadership platforms, but this was their first time collaborating on a book, he says.

“My first thought was, ‘Write a book? That’s a huge deal,’ ” Bevacqua says. “We just got into this rhythm of developing content and refining the message.”

The first draft was about 23,000 words and the final draft ended up at 40,000 words after the editing process. “It became something substantial, something that I’m really quite proud to be involved with,” Bevacqua says.

“Vince Bevacqua and I worked very well together,” Smith says. “It was a wonderfully great rewarding experience.”

Speak Like a Pro Without Looking Like a [email protected]$$ is available at gregsmithleadership.com, Amazon, Barnes and Noble and other online stores.