‘Groom Therapy’ Is a Cut Above the Rest

YOUNGSTOWN, Ohio – Kelan Bilal squints his eyes and leans in for a closer look. After spinning the barber chair for better light, his hands begin working the cordless clippers, delicately angling them every which way.

His client, James Rounds, will soon head to Florida for a family vacation with his five-year-old son. He came to Excalibur Barber Grooming Lounge to make sure it’s a memorable visit.

“When I go on vacation, I like to get designs,” he explains.

After about 15 minutes, Bilal’s meticulous work begins to take shape, and one can clearly see Mickey Mouse’s smiling face looking out from the back of Rounds’ head.

“My son will be excited to see Mickey,” he says with a smile.

Rounds began coming to Excalibur six years ago because his friends “had better haircuts than me and I didn’t like that.”

And he isn’t alone in his newfound desire to look better. More and more men, particularly young men, are rediscovering the benefits that a good barber can provide.

In the past five years, the barber industry has grown 1.9%, with 141,514 businesses across the United States, according to IBIS World. Bilal opened his shop inside the Southern Park Mall in 2013.

“I say ‘grooming lounge.’ I don’t even classify it as a barbershop,” he says.

He also has a term for what happens at the shop.

“I call it ‘groom therapy’ because some men don’t like the term ‘pampered,’ ” though that’s exactly what they get, he says.

“It’s kind of like a mini-vacation,” explains Bilal. “Sometimes we may send them back and give them a steam-towel facial.”

Rounds is a fan of the facials and mud-masks at Excalibur, although he admits he “catches grief for it” from some of his friends. His consolation lies in knowing that “the only reason they’re mad is because I look better than they do,” he says with a laugh.

Excalibur employs seven barbers who perform services including facials, haircuts, beard trims and hot-shaves. The hot-shaves, performed with a steam towel, lather and a straight razor, are making a big comeback, says Kiernan Kiske, a barber at Excalibur.

“Once somebody gets it one time, it’s a done deal. It’s a returning client every single time,” he says.

Kiske says the advantages of a straight-razor shave are, “One: you don’t have to do it.”

While advertising would have you believe more blades on a razor means a better shave, Kiske says that’s not the case. If you’re shaving with a four-blade razor, you’re basically shaving four times, and the extra contact can irritate the skin, he says.

At Kiske’s station, you’ll find several straight razors. Which one he uses depends on the service he’s providing. Kiske uses a lighter razor for trims and lineups and a heavier one for shaves.

Many of his clients are police officers who are required to be clean-shaven at all times, although he says, it’s not the only reason they ask for the service.

“You get a lot of people who fall asleep in the chair, they’re so relaxed,” he says.

Doug Littleton Jr., owner of Look Sharp Barber in Warren, says he rarely was asked to give a hot shave when he began nine years ago. These days, he and the two other barbers employed there perform them routinely.

“All the triple, double-blade things where you get two or three cartridges for $20 are just ripping you off,” he says.

Instead, he recommends using a single-blade safety razor, which has cheaper, higher-quality blades.

That so many young men are rediscovering the hot shave bodes well for the trade, Littleton says, because it’s “unique to our skill set. It really defines who we are.”

Still, for many young men the experience of getting a haircut includes a ride from their mother to her beauty salon. 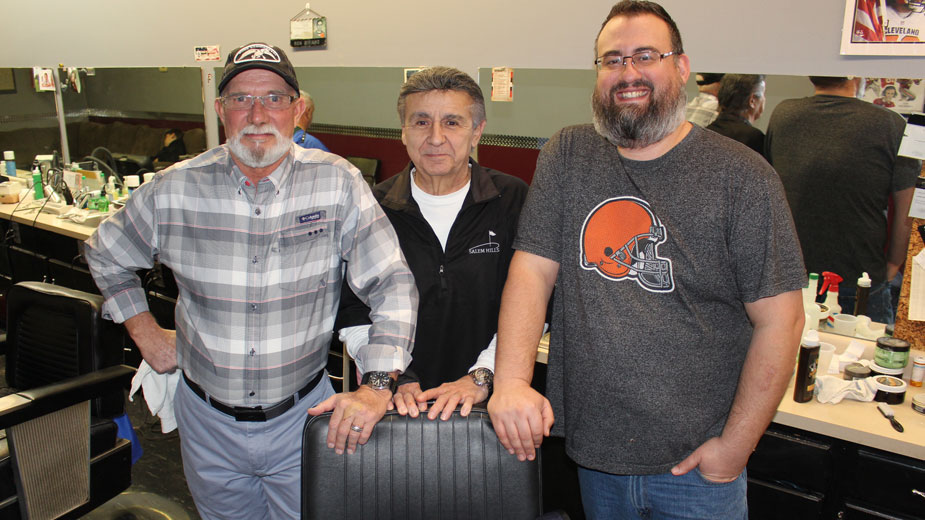 While it might be convenient, Littleton says beauty salons can’t compete with the quality and atmosphere of a barbershop. And forget about getting a shave.

“They’re not barbers. They’re beauticians trying to sell themselves as barbers,” he explains.

To become a licensed barber in Ohio, the state cosmetology and barber board requires 1,800 hours of training, including 100 hours of theoretical training and 1,200 hours of practical training. In 2018, 154 new barbershops opened for business in Ohio, adding to the 2,916 already in operation, according to board data.

At Colla’s Barbershop in Boardman, the increase in demand hasn’t gone unnoticed.

And if any shop can lay claim to having a good view of the trade, it’s Colla’s. Colla’s employs six barbers, including Tony’s sister, Lisa Sammartino, and his father, Dennis. 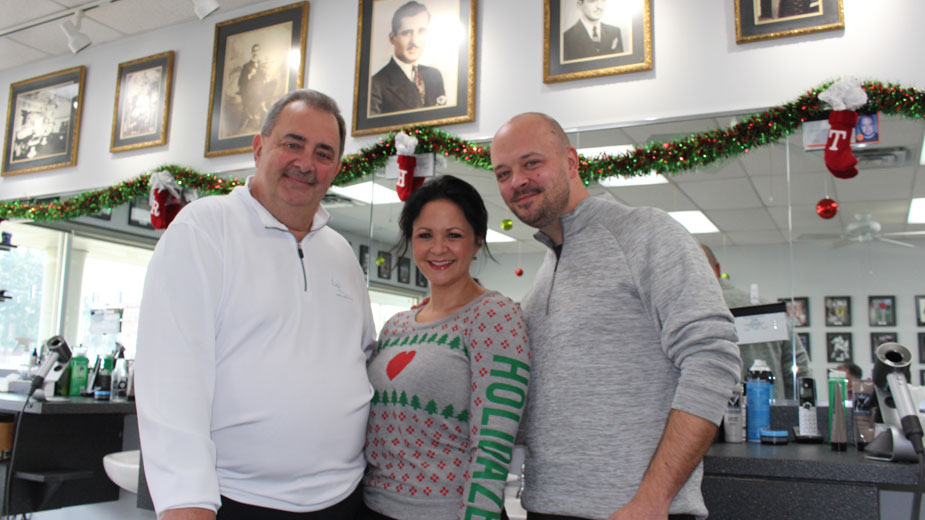 “We’re so lucky to have those pictures,” Dennis says.

The elder Colla has been cutting hair for 45 years. He says what’s “in” right now is “anything. You see anything and everything today.”

A lot of clients are starting to ask for the classic cuts, including pompadours, comb-overs and hard-parts. But no matter what they get, Tony Colla says their clients are more particular than they were 15 years ago. At that time, most men would come in only when they needed a haircut, sort of like doing maintenance.

But these days they’re coming in more often than “just when they need it. There’s more attention to detail,” he says.

And that focus on style, like his business, is getting passed down.

“Now children who are seeing their fathers do that are doing the same thing,” Tony Colla says.

It’s not a stretch to think that one could enter the barber trade today and expect to have a long, steady career similar to Colla’s.

The U.S. Bureau of Labor Statistics reports employment of barbers, hairstylists and cosmetologists is expected to increase 13% by 2026, faster than the average for all occupations. The trade is also one of the few insulated from the impact of automation and technology.

“It’s something you can go anywhere and do. I don’t ever see a machine taking over this position,” Littleton says.

Even grooming products have thus far proven immune to recent retail woes. Eighty-one percent of men’s grooming products are still purchased from bricks-and-mortar stores such as barbershops, Forbes magazine reports. The only area of the industry that e-commerce has affected is the sale of razor blades.

While that all sounds assuring, most barbers would probably say it’s beside the point.

And that family includes “everybody from a homeless person to a city judge. You never know who’s going to be in your chair. It’s a very rewarding job,” Littleton says.

Bilal echoes those sentiments, particularly when talking about the grooming that goes on in his shop.

“If we have kids that are choosing a different road, we like to groom them and get them geared towards a better path,” he says. “We’re here to groom our guys that sit in our chair for whatever it may be in life.”

Pictured: “We’re here to groom our guys … for whatever it may be in life,” says Kelan Bilal, owner of Excalibur Barber Groom Lounge.