KINSMAN, Ohio – As Aaron Miller opens a gate, his herd of cows comes running over. They know it’s mealtime. But there’s no feed to be unloaded from his John Deere Gator.

All Miller has to do is move a stretch of electric fence, which opens up a new section of the grass field to the herd of about 25 finishing cattle.

“This field, we planted in 1998. It’s been here 20 years. Grass will regenerate. You do have to take care of it and make sure it doesn’t get eaten down too short,” Miller says.

“It’s tougher to get them fat on grass. You really need to focus on the forage and soil health. You try to protect the soil and let the organisms in the soil thrive, which gives you healthy grass, which gives you a healthier animal.”

At the opposite end of the pasture are barns for pigs while about a mile away is another field for younger cows and calves. All feast on a diet of grass.

For 20 years, Miller and his wife, Melissa, have operated Miller Livestock Co. in Kinsman. The couple’s decision to raise grass-fed cattle – and eventually pigs, lambs and poultry – was a combination of necessity and business acumen, Melissa Miller says. They initially started raising cattle in 1999 because of Aaron Miller’s high cholesterol. Through research, the Millers found that grass-fed beef is high in Omega 3 and has been shown to lower cholesterol in those considered hypercholesterolemic.

“And we looked into what people were just starting to talk about, what was going to be the next big thing. It seemed like grass-fed beef was going to be it,” she says. “Our farm isn’t suited for crop farming. There’s a lot of heavy clay, so we knew it had to be livestock. And that’s what Aaron really loves.”

At first, the Millers were selling to local customers who bought quarters or halves of beef because they were concerned about their health, the same as Aaron Miller was. Within the past few years, however, the demand for locally grown food has exploded and with it has come a boom in business for Miller Livestock.

The Miller’s customer base is a fairly even split between shoppers at the Howland Farmers Market, direct buyers picking up quarters and halves and restaurants in the Mahoning Valley and Cleveland, Melissa Miller says.

As an example of the growth, Aaron Miller points to the upscale Fire Food & Drink in Cleveland, operated by chef Douglas Katz. After trying a burger made with Miller Livestock beef at an event in Cleveland a few years ago, the chef began ordering 40 pounds of beef a week from the Kinsman farm. Today, he buys 120 pounds a week. Locally, the farm provides beef to Gatsby’s at The Avalon Inn and Cultivate Café near Wick Park. 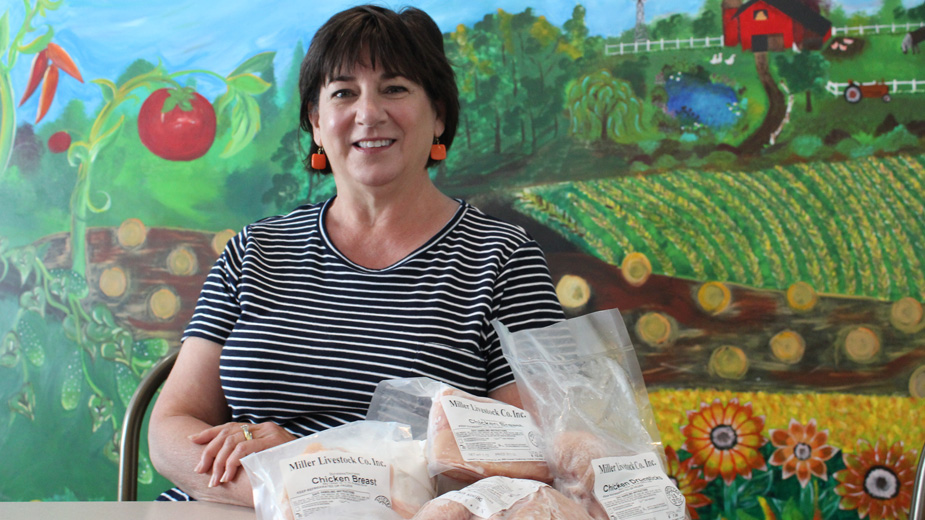 “We sell a ton of products every week and we see the same customers coming back week after week, month after month,” Miller says about the Howland Farmers Market. “There are new customers every week. That little local market in Howland puts a lot of money into the community and that money stays local.”

The farm also delivers five pigs every other week to Case Western Reserve University’s food service provider, Bon Appetit Management Co., he says, which did a study on the economic impact of the hogs being sold.

“There are 73 people who are getting some sort of paycheck as a result of us sending those five pigs,” he says. “Local really does mean a lot.”

Adds Melissa Miller, “When you buy from us, you are affecting the lives of people in this community, not the people in Bentonville, Arkansas [where Walmart has its headquarters].”

First and foremost in raising grass-fed livestock, Aaron Miller says, is the soil. He’s constantly keeping an eye on the height of the grass – untouched portions of the field are waist high – the temperature of the soil and the weather.

“A few weekends ago, we got 9 1/2 inches of rain and it messed up our rotation. There’s a dry spot on the farm right now, so that’s where they are,” he says.

Grass will start to grow again after it’s been left alone for a few days and will continue growing until the rancher moves the fence and the cattle, pigs, sheep or chickens eat it down again.

“We always want the soil to be covered,” he explains. “We don’t want water running off our property and causing erosion and we don’t want the soil to get real dry. There needs to be enough cover so that on a hot day, the soil temperature doesn’t rise way up and kill what’s working for you under the soil.”

Maintaining the pastures isn’t just a matter of providing quality meats or a better taste, the couple says. It’s about taking care of their herds.

“They have freedom. They’re not forced to do anything,” Aaron Miller says. “They’ve got the choice about how much they’re going to eat every single day. They lead a good life.”