NILES, Ohio – What will the future Niles look like and offer to the families, businesses, shoppers and visitors down the road?

If current high school students have anything to say about it, the city will have lots of improved parks and green space and events for them to look forward to attending, as well as the jobs and housing they would need to raise their families.

The Eastwood Mall Complex and area surrounding it would continue to have the shops and restaurants they love, but with even more entertainment options.

About 20 Niles McKinley High School students participated in a focus group through the city of Niles and MS Consultants, the planning engineering firm the city has hired to help shape the future of the city.

Katie Phillips, an urban planner at MS Consultants, said the focus group with the students is just one of the groups the company is planning to reach out to during the yearlong comprehensive plan creation. MS Consultants will be talking with local community groups, park users, business and industry leaders and others the firm and the city identify as needing their voices heard. Phillips credited city leaders like Mayor Steve Mientkiewicz with ensuring that the youth of the community is one of the focus groups.

“We knew targeting the youth, such as high school students, in this area was going to be extremely important,” Phillips said, “because this plan is a projection for 10 or 20 years into the future of Niles, and without hearing the people who are in high school right now and seeing what they want for the future, we would be really missing the mark if we did not make sure to get their word heard.”

Before MS Consultants asked the students what they wanted, a role playing game developed by the firm was played to break the ice and explain the concept of city planning. If the center of Niles suddenly was wiped away, where would the students rebuild the homes, parks, businesses, apartments, industries and other amenities. At the same time, adults playing the parts of the stakeholders – a business owner, a landlord, a parent, a young graduate, a retiree, the downtown partnership, the park director and the mayor – tried to influence where the students placed the different components on their game board.

The retiree said he protested against industry in the 1960s and wanted it nowhere near him, and the parks director chided one group of students for putting too much industry near the park, giving less space for deer and bear to roam. One of the students replied: “Are the deer and bear paying taxes? I think not.”

“It’s pretty cool to see our youth engaging in the planning process, and they’re very innovative in what they’re doing with this project,” Mientkiewicz said as he watched the students recreating Niles as they would make it. “It’s refreshing to see, and I give them a lot of credit for their ideas, their innovation and their input that is actually going to be incorporated in the comprehensive plan.”

The team that earned the most points for their planning project as judged by the stakeholders in the end was declared the winner.

Alaina Thigpen, a senior on the team, said communication made the biggest difference for their success.

“We had to talk to all the different stakeholders that were walking around,” Thigpen said. “So we just wanted to see what best fit for their needs. It was difficult trying to get every little detail, so we just tried to accommodate the best we could. And if we couldn’t, then we just tried to do one or two things that they needed.”

Thigpen said it was hard to please everyone. For instance, she said they struggled with the needs of the retiree because it was difficult to make him happy without invading his space. Instead, they strove to make the majority of the stakeholder’s happy.

Mientkiewicz agreed that in City Hall it is always a challenge to accommodate the needs of all the citizens and residents, but if you do things the right way, with a purpose and a common goal, local government works.

He hopes in 10 and 20 years, the city will see the results of the comprehensive plan, including more needed housing and industry, public land improvements, zoning changes and utilities.

After playing the game, students talked about ways they would like to improve the city parks, the downtown with different shops than what they can find in the Eastwood Mall Complex and events like outdoor movie nights. Students listed among Niles’ strengths the city-owned utilities, the mall complex with the restaurants and the Scrappers baseball team.

Phillips said they took a lot away from what the students told them they could implement in the plan, as well as some surprising things.

Phillips added the students want festivals and community events, and it seems like they even want to help be a part of planning those events. The students utilize their parks and learned from Mientkiewicz that the city plans to use $2.55 million in federal funding for improvements to Waddell Park, including the creation of a splash pad.

“They’re interested in bringing pride back to the community,” Phillips said. “Also, they are interested in feeling that more holistic feel of Niles. I don’t know if that is something that their parents may have talked about in the past, or their grandparents. It feels like they’re missing that a little bit, and they would like to see that come back and that they are willing to be a participant in that.”

By being aware of the students’ interests in making Niles a better place and bringing back community pride, Phillips said the city can cultivate that in the future.

“We want them to feel empowered with this process and with this program that we have set up for them,” Mientkiewicz said. “The overall goal is to keep them here. … These kids are our future, and we want to do what we can as a community to retain the youth in this city. I think we’re on the right track. I think we have engaged them and sparked an interest, so I’m very excited for it.”

After the program, some of the students shared their thoughts about being asked to participate.

Durso and another sophomore, Laytam Busse, both see the mall area and all the fast food places as strengths of Niles, and Busse points out people come from other places to visit the Eastwood Mall Complex.

Durso said she believes the downtown has a lot of potential that goes unrecognized. She also thinks there are a lot of good people in the community who make it stronger.

Yet, Durso said a lot of the students feel they have to go outside Niles to find something fun to do, and Busse said growing up, his family took him to parks in other communities. He was happy to hear about the plans to improve the parks, and Durso said she also would like to see the community be more kind to the parks and pick up the trash.

Aside from family, Durso said Niles is the type of place people return to live because there are some things to do without the chaos of a larger city.

Busse said he would like to see housing improvements, with the city having policies so rental homes and others do not look so run down at times.

“[We should] definitely have a few more activities and events within the city so people come together,” Busse said, noting charity walks and runs would be great to have, as well as block parties, cook-offs and outdoor film nights, for both adults and families.

“Today I learned that in a city there is definitely pros and cons, and it’s great to get different opinions from all kinds of different people and work together to figure out a great plan to make that city a better place for the upcoming generations and workers within the city,” said Busse, who thinks working to make people happy in their homes and city would be a good career for the future.

After their participation Tuesday, the students were invited to join the steering committee with others in the community as MS Consultants continues to strive to make sure people are included with different interests and agendas. It was noted that there is a large contingent of baby boomers in the city, and Principal Stephen Rovnak reminded the students if they want their voices to be heard among all those voices, they need to participate.

They were encouraged to get their friends and family to also participate in the process by going online and completing a brief survey.

Thigpen said the students were appreciative of the city’s including them in this process.

“We really appreciated it, because we are the future, the new generation,” Thigpen said. “It really was nice to see they wanted to come talk to us to see what we want to happen with our town and our city.”

While she might go elsewhere after college, she said she has a ton of family here and would not be able to forget about Niles, and she would come back. 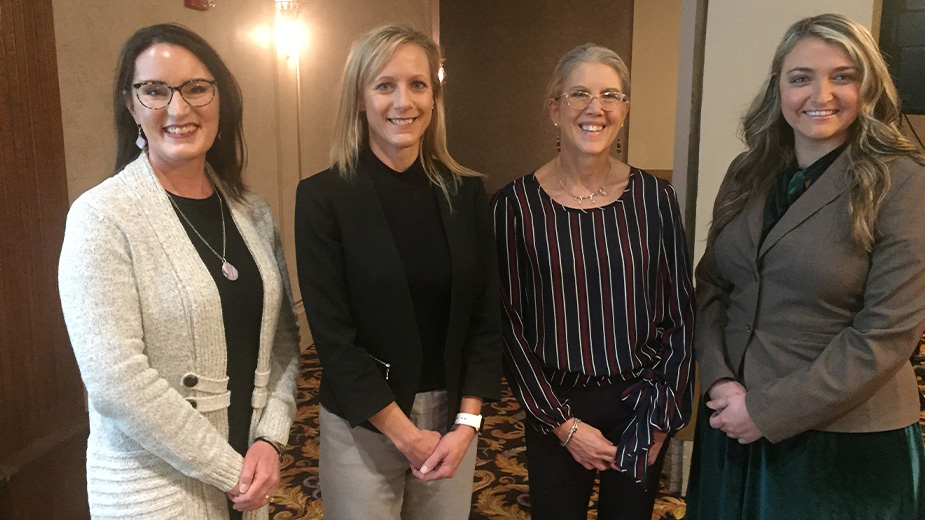