His company, Strangpresse, has found a natural fit here. It designs and manufactures extrusion nozzles used in the additive manufacturing process. Tech Block No. 5 was redeveloped to house companies engaged in 3D printing technology.

Strangpresse, formed in 2014, and a handful of other companies George has helped pilot to commercial success are the result of years of listening to and heeding advice from the many entrepreneurs he’s had the privilege to know over the course of his career.

“I’ve had a lot of mentors along the way who have taught me how to run a company and what it takes to come up with ideas and bring them to fruition,” he says.

George is the inaugural recipient of The Business Journal’s Brain Gain Excellence in Entrepreneurship Award, created to recognize individuals who have leveraged local resources to kick-start fresh ideas into promising businesses.

George’s career path has given him a sharpened business sense able to identify opportunities that others might have overlooked. In the process, he has helped to establish the Mahoning Valley as an important part of the country’s technological and manufacturing renaissance.

Moreover, George devotes considerable time to impart his knowledge and experience to the next generation of entrepreneurs across the Mahoning Valley to attract, keep and build on the talent already here.

His personal story is remarkable and inspirational.

“I was the first in my family to graduate from college,” he says.

George, a Brookfield High School alumnus, entered Youngstown State University in the mid-1970s with the intention of becoming an attorney.  “I found out I couldn’t write very well,” he says with a laugh. Instead he turned his attention to accounting and business.

Upon graduating with a degree in business, George joined the accounting firm of Packer Deislinger and Johnson in Warren in 1981. Shortly thereafter, the firm merged with Goddard & Thomas CPAs in Youngstown, and formed the accounting firm Packer Thomas. George was tapped to run the downtown Youngstown office and rose through the ranks to become a partner and then president of Packer Thomas.

“I had a strong basis at Packer Thomas,” George says. “It gave me the background that I really needed to be successful. I had a diverse client base. A lot of them were auto dealers who were all entrepreneurs.”

George became an entrepreneur himself in 2007, when he left Packer Thomas to acquire a company in Kent that he heard was for sale. That company, Hapco, was best known for its subsidiary that distributed tarps for over-the-road trucks.

“But that’s not what interested me,” George recalls. What struck him was Hapco’s line of hot air tools and a product developed for the U.S. Department of Defense that could weld and solder components in hazardous environments. That tool, he says, proved effective in repairing wingtip edges on the F-22 and F-25 fighter jets.

“The market for that tool has continued to expand,” he says.

George says he’s been very fortunate. Not long after acquiring the company, the U.S. Department of Energy’s Oak Ridge National Laboratory in Tennessee began to buy plastics extruders from Hapco. These extruders, the company learned, were being used to develop an additive manufacturing system capable of 3D printing a car.

“That’s how I got introduced to 3D printing,” he says. After several trips to Oak Ridge, George seized upon a suggestion that a company should be formed that could build extruders with large-scale 3D printing capability.

“I wanted to do something new,” he says, and Strangpresse was born.

Oak Ridge in particular wanted an extruder that could produce 160 pounds of plastic per hour and weigh no more than 160 pounds.

“We failed,” George recalls after working on the project for 13 months.

“We got to the 160 pounds per hour but the extruder weighed 175 pounds,” he says. “We were disappointed.”

But Oak Ridge was ecstatic.

“They didn’t think we would even get that close,” George says.

That same extruder today is capable of pushing out 250 pounds of material per hour, he says.

Other opportunities in 3D soon opened up, George says, especially after he met Slade Gardner, at the time working with additive manufacturing processes at Lockheed Martin. “He was amazed at our extruder technology.”

Gardner says he was so impressed that he convinced Lockheed to buy Strangpresse’s first commercial extruder.

“Strangpresse is the world’s preeminent extruder for large additive manufacturing,” he says. “Chuck saw it coming and decided to take a risk and start a business and have a go at it.”

More important, he and George remained in touch after Gardner quit his position at Lockheed to pursue another venture.

That venture is Big Metal Additive, a hybrid additive manufacturing operation in Denver that 3D prints metal components, replacement parts, prototypes and full-scale demonstration products for customers in all types of industries.

While Gardner was adept in the science and technology behind additive manufacturing, he acknowledged that he lacked the financial and business acumen to help launch new technology.

“I invited Chuck to be my partner. And thankfully he accepted,” he says.

Gardner today is CEO of the company and George is its chief financial officer.

Big Metal Additive, for example, is working with the Department of Defense on reducing lead times in manufacturing and delivering parts for the U.S. Navy.

There is concern over the ability to source castings and forgings from domestic companies, Gardner says. There are a limited number of foundries in the country and those in operation are overbooked, he adds. This results in longer lead times for customers such as the Navy to replace critical equipment parts.

Although Big Metal Additive is based in Denver and employs 12, its goal is to expand to several locations across the country, including the Mahoning Valley, according to Gardner.

“Our vision is to have a factory of 100 machines, not under one roof,” he says. “Because of our strong ties to the Mahoning Valley, we actually have a location in mind.”

Gardner stipulates, however, that any expansion here would be based on evolving market demand and customer opportunities. The company currently has five machines in Denver.

“We grow at the speed of business,” he says.

While additive manufacturing has captured people’s imagination and attention, the technology has been slow to appear in mainstream production, Gardner says.

George, Gardner says, has the capability of helping the company grow and the partnership has worked well.

“He is a patient mentor when it comes to educating me on the financial requirements of running a business,” he says.

Developing these new businesses and extending them into the Mahoning Valley, George says, is critical to retaining talent and laying a foundation for the region’s future. While creating new opportunities is a priority, so is improving the cultural and quality-of-life amenities across the region that stand to attract younger people.

He often uses Youngstown/Warren Regional Chamber CEO Guy Coviello’s observation that over the last 25 years, the population of the Mahoning Valley has declined at an average rate of 7.5 people per day.  “We can’t survive like that,” he says.

As such. George has helped to launch new businesses that young entrepreneurs lead.

“I think a good example is Greenboard IT,” he says.

George, Wiley Runnestrand, and Mike Martof founded Greenboard IT, based in Warren, less than two years ago.

George liked the vision of the two young entrepreneurs, he says, and thought it could be a successful venture.

The company, in operation just more than a year, recycles computer and electronics waste. It is also a tech outfit that uses sophisticated processes to wipe data clean from devices before they can be compromised, Runnestrand says.

Runnestrand, who grew up in Bazetta, says George listens carefully to younger people and understands their attitudes toward building a business.

“He has a knack for finding people and putting the next generation in the driver’s seat,” says the 35-year-old Runnestrand.

Greenboard IT began with two employees and has grown to six. “We’ll hire another two by the end of the year,” he says.

“I have a lot of gratitude to Chuck,” Runnestrand says. “To work in my hometown, that’s what I always wanted.”

Other young companies as well have turned to George and companies such as Strangpresse to establish a strong working relationship.

“He’s been a great partner from a materials standpoint,” says Dan Fernback, vice president of JuggerBot 3D, a company that produces medium and large 3D printers at the YBI Tech Block 5 building.

Fernback says Strangpresse has provided the necessary components so the company can manufacture printers using the pellet extrusion process. “It’s been a huge help from a business standpoint. He’s one of our most valuable suppliers,” he says.

Just as important is leveraging George’s knowledge and connections throughout the additive manufacturing industry, Fernback says. “He’s been an unofficial mentor to us young guys. He’s always been willing to provide insight to help our team’s growth.”

George serves on the YSU Board of Trustees and has taken special interest in the university’s Excellence Training Center in downtown Youngstown. “What we’re trying to do is find these businesses and those with ties to the area and keep young people,” he says.

While additive manufacturing makes sense in some aspects of production, it’s not the magic bullet that will, on its own, power the Mahoning Valley into the future, George says. “We’re getting better. But we still have a long way to go.”

Other opportunities abound, he says, especially in the wake of major investments such as Foxconn’s plant and Ultium Cells LLC’s $2.3 billion battery cell production factory in Lordstown.

Among the more recent projects George has in mind is potentially developing a 100,000-square-foot spec building on property in Warren. Manufacturers or suppliers today demand modern buildings, while the Mahoning Valley has mostly older, antiquated structures available, he explains.

“We hope to break ground next year,” George says.  “Companies will bring younger people with them – engineers, trades. I see this as part of our ‘Brain Gain’ opportunities.”

At the same time, the region must adapt to amenities that appeal to a younger generation, George adds.

“You need to find core enabling factors in quality-of-life issues, such as a YSU adult soccer league,” he says. “Things that younger generations need or require.”

Pictured at top: Chuck George is the recipient of the Brain Gain Excellence in Entrepreneurship Award. 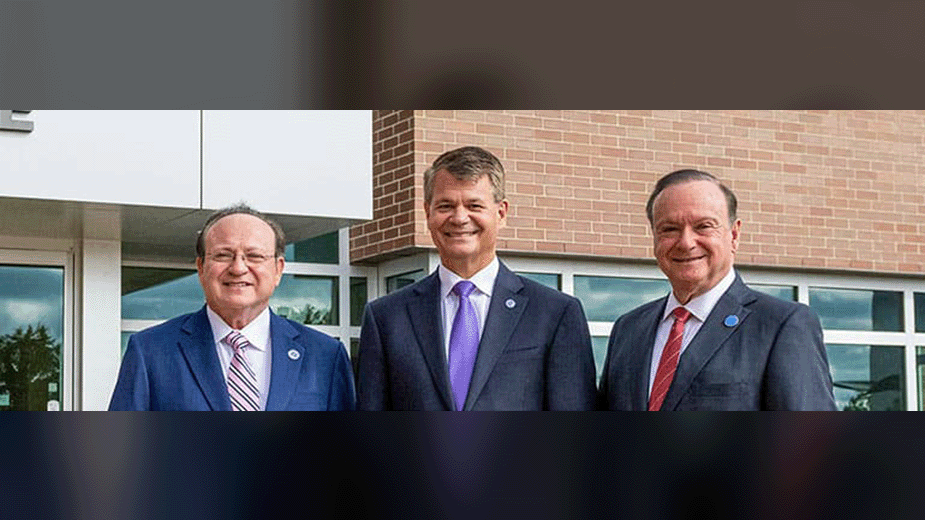