An electrical engineer with the U.S. Department of Defense. A program assistant for a nonprofit founded by pop star Usher Raymond. A budding entrepreneur and philanthropist. These are what three people accomplished by their mid-20s – and all three are Inspiring Minds alumni.

Warren G. Harding High School classmates Shawná King, Marvin Logan and Kimani Bonner were among the earliest participants of the after-school program that provides tuition-free tutoring, workshops and personal encouragement. Bonner recalls the first meetings where he formed a bond with King, Logan and the founder and CEO of the program, Deryck Toles.

“I learned how to step up in my role,” Bonner says. “If it wasn’t for Inspiring Minds, I wouldn’t be where I am now. That’s the honest truth.”

Last year, he earned his master’s in public administration from Penn State University and now works as a sales support specialist with CapStar Bank in Nashville. He plans to open his own small business and a nonprofit organization there.

Inspiring Minds gave Bonner and King the leadership skills to be ambassadors at their respective universities, they say. King had dreamed of attending a historically black college, but wanted it to be close to home, she says. Toles encouraged King get out of her comfort zone.

“He [Toles] said, ‘If you never go, you’ll always regret it,’ ” King remembers. “Taking the chance is the best decision I’ve ever made.”

As an ambassador for Alabama A&M University, King gave campus tours and traveled to speak to high school students, some of whom she later met on Alabama A&M campus.

“It’s good to know you inspired someone to go to school and take a chance,” she says.

King earned her baccalaureate in electrical engineering in 2014 and was an intern two summers with NASA in Greenbelt, Md., before starting her job with the U.S. Department of Defense. She’s pursuing her master’s degree in engineering management at the University of Maryland and hopes to continue government work either on the West Coast or overseas, she says.

Inspiring Minds today serves 300 high school and K-8 students at its site in Warren and another 150 at its Youngstown chapter. The local organization employs 14 full-time staff and 40 to 50 part-time, seasonal volunteers, some of whom are alumni.

Toles founded Inspiring Minds 13 years ago after an injury ended his career as a linebacker with the Indianapolis Colts in the NFL. In the beginning, he met with four kids for an hour each month. That hour soon became two hours as the kids started bringing their siblings and cousins to meetings, he says.

Toles understood the benefits of taking students to college campuses across the country “to learn what they want to be and where they want to be,” he says. He mentored the group, who planned and raised funds for the trips. He also focused on building relationships among the students, some of whom had a difficult home life, which affected their schoolwork.

“Sometimes they’re nervous just to raise their hand in class,” Toles says. “A teacher may hear ‘I don’t care,’ when the reality is they’re embarrassed because they just don’t know it.”

Marvin Logan was failing three classes his freshman year when he came to Inspiring Minds. The trips to college campuses allowed Logan to see a world bigger “than the four corners that surrounded me,” he says. His trip to a camp in Milwaukee, Wis., changed Logan’s life.

The camp was organized by Usher’s New Look, a nonprofit founded by the musical performer Usher. In August 2011, Logan became a mogul in training with the organization. Later he became its administrative and marketing coordinator, then program assistant.

In December 2016, Logan became Inspiring Minds’ transition coordinator and works with seniors and graduates to “smooth and strengthen the students’ preparedness as they transition academically, professionally and personally,” he says, to college, the military or the workforce.

“It’s important that we create a holistic, well-rounded young individual that can really add something to the environment that they’re in,” he says. Inspiring Minds continues to add resources to meet the unique needs of each participant, he says.

Last summer, a grant from the General Motors Foundation helped to pay for four 3-D printers. Staff and students worked together in their assembly and today use them to make Mason jar lids with the stamp of the Inspiring Minds logo. Jars filled with spices will be distributed at this year’s fundraising gala April 14, Success by the Dozen, at the Metroplex Expo Center in Girard.

“It’s special, for our students especially, to see something that they built. They get to actually see these products being made from it,” says Jalaya Provitt, an instructor in Inspiring Minds’ high school program.

Provitt, another Inspiring Minds alumna, came to work for the organization after graduating from Thiel College. Program instructors tutor students with a C, D or F in school subjects and track their progress. Also a mentor, Provitt makes herself available to the students whenever she’s needed.

“Sometimes I’m a shoulder to cry on … someone there just to listen to them,” she says. “I carry more than one title around here, but that’s what makes this job so great.”

It’s emotional, she says, to see students once in her K-8 program grow up, graduate and be accepted at their dream schools. “I’ve seen them as these little kids and now they’re about to graduate from high school and go on to bigger and better things,” she says.

Danajah Coleman, 17, credits Inspiring Minds and Provitt’s mentoring with her acceptance at the University of Cincinnati. Coleman joined Inspiring Minds in the seventh grade and has visited 50 college campuses since she was a freshman. And while tutoring helped Coleman raise her GPA to between 3.5 and 3.9, her bond with Provitt taught her to not take opportunities for granted, she says.

“It makes me feel good to know that somebody who was in the same situation that I was went to do something and then came back,” Coleman says. 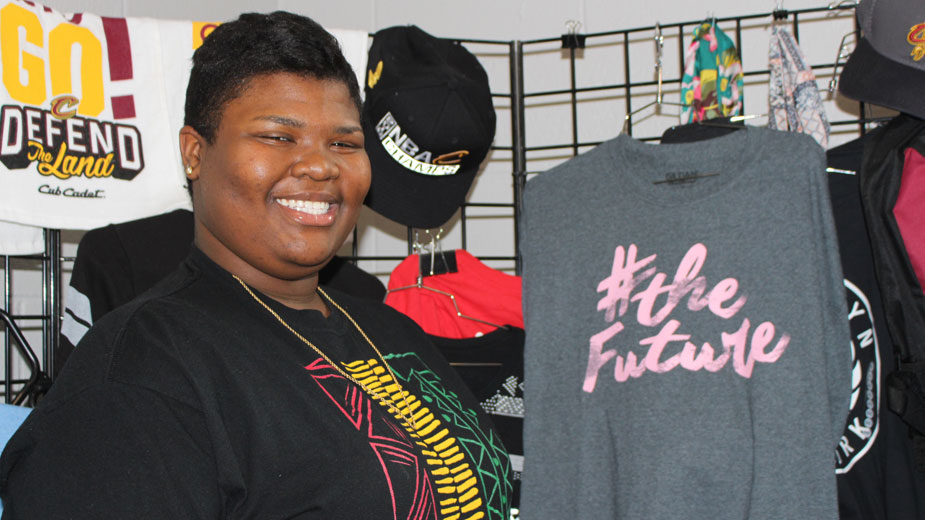 Danajah Coleman, 17, credits Inspiring Minds and her bond with Jalaya Provitt for getting accepted to her “dream school.”

Inspiring Minds exposes students to hands-on experiences. When Quran Pittrell, 16, showed an interest in cooking, staff set him up with classes at AVI Foodsystems Inc. At the end of each session, students cook a dish of their choice to demonstrate what they learned.

“I impressed them sometimes and I felt good about that,” Pittrell says. “Whatever you want to do, [Inspiring Minds] will try to put you in something to advance it.” 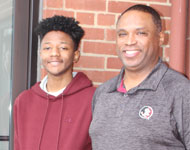 On a snowy March afternoon, Quran Pittrell, 16, and his mentor, Tony Stubbs, play chess in the Inspiring Minds Warren study area. After a few moves, Stubbs puts Pittrell’s king in checkmate, then shows him how he did it.

The game is as much about teaching Pittrell about the consequences of choices as chess strategy, Stubbs says. It’s something he takes seriously as he counsels Pittrell about the choices he faces as a student at Warren G. Harding High School, such as standing up to bullying, avoiding fights, keeping his grades up and choosing the right friends.

“You have to get to a point where those things and those choices you make are adding to your life and not taking away from it,” Stubbs says.

Stubbs met Pittrell four months ago when he became a mentor at Inspiring Minds. Since then, the two have formed a bond that Pittrell says lets him, at times, be more open than with his parents.

“The first conversation we had got pretty deep, so that kind of set up more bonding right away,” Pittrell says. “He helps me with whatever I’m going through. Parents do that, but sometimes they can get, you know, scoldy.”

As the father of two grown sons and a daughter, Stubbs understands the challenges of high school and believes he has good advice to offer, he says. A few times when Pittrell got in trouble at school, Stubbs responded with insights he learned from his mother.

“You can’t allow trouble to keep you from getting things that are available to you. Because that’s what trouble does, it limits you,” Stubbs says. “You want to be that
spaceship that’s always soaring.”

Stubbs learned of Inspiring Minds while officiating semi-pro football games for the former Northeast Ohio Disciples, of which Deryck Toles and Ramona Bruno were
co-owners. Toles, founder of the program and its CEO, invited Stubbs to visit and meet the students.

“Right then and there, I was sold on it,” Stubbs says.

Now when he isn’t officiating high school football and lacrosse, when he isn’t at Trumbull Regional Medical Center’s maintenance/environmental services department where he has 30 years or running his business, TNT Floor Care, Stubbs is helping Pittrell stay focused and motivated in his schoolwork. He hopes more businesses in the community will follow, he says.

“When it comes to our community, we need more men who can step up and show our young men a different way of thinking, a different way of living,” Stubbs says. “The more relationships they build, then the better future they’re going to have.”

When Celeste Harris, 17, took a weeklong trip to Malone University in Canton to check out its nursing program, she received her CPR certification, says her mother, Angela. The trip broadened her daughter’s perspective to see opportunities outside of the area, she says.

“It’s really helped her pinpoint the area that she wants to study when she graduates from high school,” Harris says.

“It’s a well-rounded process to where they get a little bit of everything,” she says. “There’s structure in both programs. And that’s what I really like.” 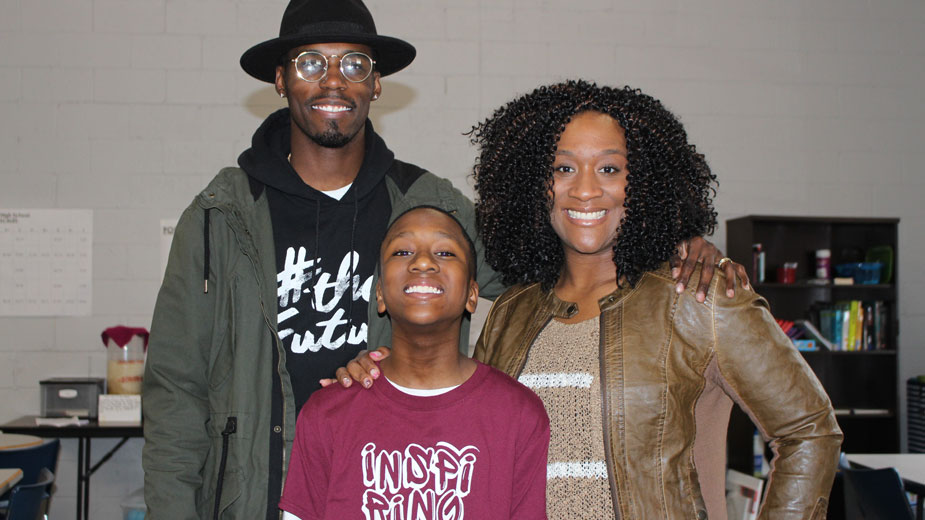 Angela Harris (right) enrolled son Wayne in IM in the third grade. He’s formed a bond with K-8 mentor Deonte Stubbs who teaches him to dance.

Wayne Harris says the program improved his study habits in reading, science and his favorite subject, math. Staff encourages them to try new things as well. Deonte Stubbs, K-8 mentor and high school mentor coordinator, is teaching Harris to dance, which he plans to demonstrate in his school’s talent show later this year.

“When I saw Mr. T [Stubbs] dancing, I wanted to learn how to do that so I could teach other people how to do it,” he says.

By the end of this year, Toles expects to complete the second phase of a $1.5 million renovation of the organization’s 24,000-square-foot building at 837 Woodland St. NE in Warren.

In the plans are 16 to 20 classrooms, office space, a kitchen and “cafetorium,” individual study rooms and some meeting space. He hopes to begin the third phase, a gymnasium, in 2019.

The organization is adding a chapter in Philadelphia that will begin a four- to six-week summer program for 75 middle-school students, he says. Other chapters are planned for Raleigh-Durham, N.C., and New York City.

The vision is a chapter in every state, Toles says, and as more cities show interest, he works closely with staff in those cities to ensure each chapter matches the model established in Warren and Youngstown.

“We really believe in our model and what we’re doing,” Toles says. “We want to see the same level of success in each one of the states that we operate in.”

Inspiring Minds welcomes monetary donations from individuals and groups, partnerships with local businesses and time from volunteers and mentors. Click here for information on how you can support Inspiring Minds.

EGCC to ‘Recharge’ the East Side of Federal Street

Sweeney Upholds Use of Recording in Sammarone Trial