WARREN, Ohio – People of a certain age may remember a time when the three Rs – reading, writing and arithmetic – were sufficient to prepare students for the real world.

Today they are not.

In his 2008 book, The Global Achievement Gap: Why Even Our Best Schools Don’t Teach the New Survival Skills Our Children Need – And What We Can Do About It, Tony Wagner, a senior research fellow at the Learning Policy Institute in Washington, D.C., outlined seven survival skills that today’s students need to be successful adults.

Those skills, he wrote, are critical thinking and problem-solving, collaboration, agility and adaptability, initiative and entrepreneurship, oral and written communication, accessing and analyzing information, and curiosity and imagination.

And it was with these core competencies in mind that Alyse Consiglio began to restructure the curriculum at John F. Kennedy Catholic School in Warren.

Consiglio took over as principal of Kennedy high school last year after leaving the Trumbull County Educational Service Center, where she held the position of classroom technology curriculum and instruction supervisor. Her work there led her to believe that technology, combined with a different type of education model, could cultivate Wagner’s survival skills in her students.

The sowing ground where Consiglio is cultivating those skills is the high school’s new Think Lab, a large, open space that encourages collaboration and creativity. “It allows students to follow their passions. They’re allowed to kind of be on their own,” she says.

The Think Lab was created in space that formerly housed the school library. Books that once filled the area have been dispersed throughout the classrooms to make way for a large bean bag chair, computers, a green screen and a 54-inch Hewlett-Packard vinyl and latex printer.

“It’s all about utilizing the space for the time you’re in,” he says. “Where we are now, that needs to be state-of-the-art, 21st century.”

After Hurricane Maria devastated Puerto Rico, students in the Spanish Club used the green screen to tape a message to accompany the donations they raised.

Lego models are built and recorded a piece at a time, then edited to create stop-motion animation.

Matt Green frequently uses the lab’s virtual reality goggles for his history lessons, allowing students to walk the streets of Paris or explore the Palace of Versailles. 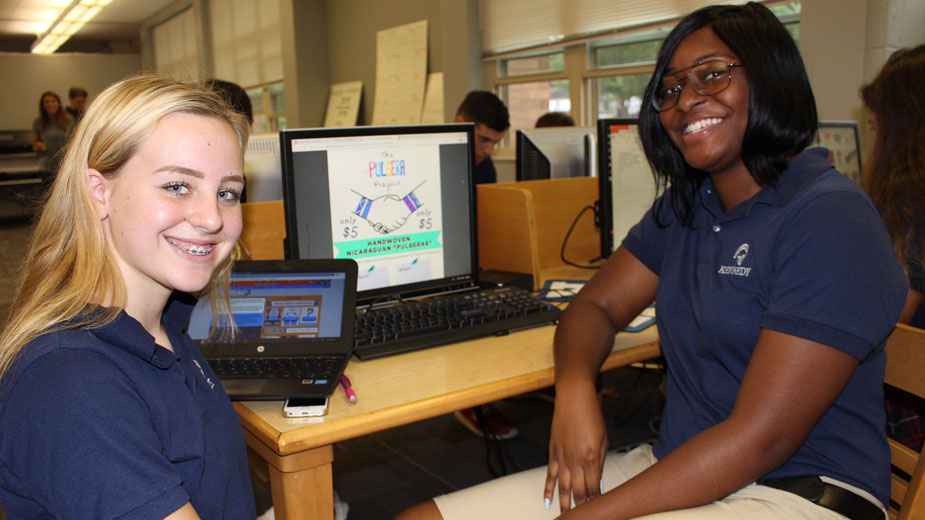 Pictured: Jasmyne Whitman and Jermani Bryant design a bracelet in the Think Lab.

“Students really love these lessons because they can see and experience the history as we are learning about it,” Green says.

Also popular are the lab’s Ozobots. Students in the junior high school print computer code on strips of paper that are fed into the small robots, instructing them to perform a specific task.

But perhaps the most used piece of equipment is the printer. Capable of printing banners, vinyl, press-on shirts and posters, the printer is the workhorse of the school’s entrepreneurship course.

“Students are learning to design different types of signage to solve problems either for clients that we bring in or for school projects,” Consiglio says.

Recently the students created all of the signage for the 10th annual Huddy Golf Outing. The outing was started to assist alumnus Brian Hudzik with his medical bills after he was diagnosed with multiple sclerosis.

Hudzik says in recent years the fundraiser has been refocused to provide donations to the Cleveland Clinic, the Youngstown State University Foundation and the Walnut Grove playground for children with disabilities in Canfield.

“We asked them to create the hole sponsorship signs and to create a banner that would recognize our corporate sponsors,” he recalls.“They were very professional and it was really neat to see them working with that opportunity.”

In addition to working with area companies, students in the entrepreneurship course have the opportunity to hear from business leaders. Senior Gannon Fridley says the advice has been eye-opening.

For Armand Nannicola and Tim Klaben, the course is an opportunity to prepare for the possibility of one day taking over their respective family businesses.

“I would love to take over the business,” says Nannicola. To do so, he says he must first show his father he’s ready for the responsibility.

“He wants to make sure that he’s not handing it over to me. He wants me to be qualified to do it,” Nannicola explains.

For Klaben, the course provides a small glimpse of the commitment and work ethic needed to run a business.

“It’s a lot of stress, a lot of work and you have a lot of priorities,” he says.

But rather than being intimidated, students say their experience in the Think Lab has increased – or, in the case of Storm Morgan, created – their desire to start their own business.

“I wasn’t sure what I wanted to do but this course really helped me have a love for being an entrepreneur,” Morgan says.

After taking the class his junior year, Morgan decided to enroll again his senior year. The project that got Morgan and his friend, Isaac Hadley, “loving” the class was one that also served a practical purpose. 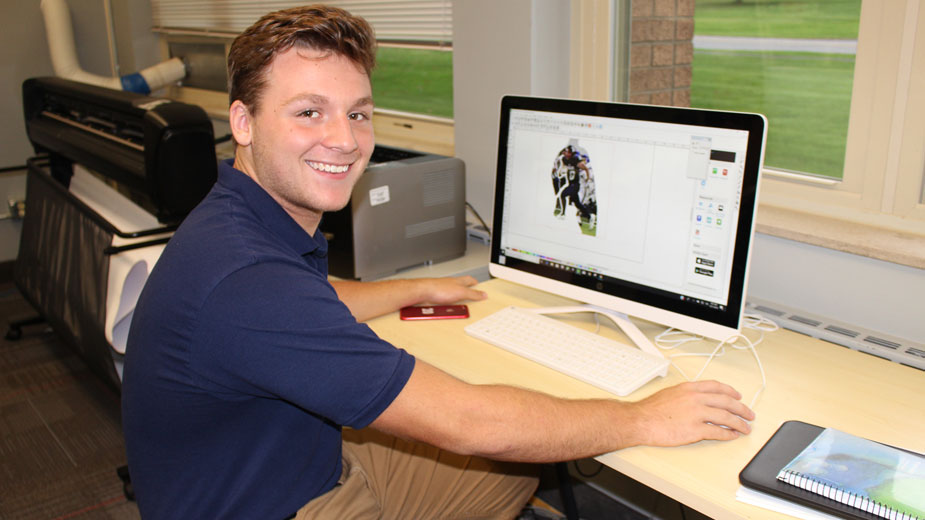 Pictured: Isaac Hadley has designed banners for teachers as part of a Think Lab project.

The students were tasked with creating rectangular banners for the door-windows of every classroom in the school.

Each banner is personalized, so a visitor can easily discern the math room from the chemistry lab, but it also keeps people from seeing inside the classroom in the case of an active- shooter situation.

“We talked to each teacher and asked them what they wanted,” Morgan recalls.

At first he and Hadley, also a senior, struggled to use the printer. Hadley says after some practice they got the hang of it and are now “showing other people how to use it.”

The most rewarding part, Morgan says, was presenting the finished product to the teachers.

“Every time we would give them a banner, they would love it.The smile on their face was priceless,” he says with a smile.

Morgan and Hadley are two of the roughly 30 students who are split between the two entrepreneurship classes at Kennedy. Instructor Joseph Carrabbia says he tries to give each the freedom to make the course their own.

“We have a very hands-off approach to it. I want the kids to have some autonomy and learn how to do things on their own,” he says.

Instead of tests, books and lectures, much of the course is project-based, with students left mainly to their own devices.

They’re expected to hit deadlines and meet the expectations of either the instructor or the customer. Making the most of their time is also a focus, because each day doesn’t have a set agenda.

“The printer is backed up so you can’t get on it. How are you using your time to be the most productive entrepreneur you can be?” asks Carrabbia.

Many students that don’t excel in other courses flourish in the Think Lab, according to Consiglio.

“They’re my workhorses. They have great ideas,” she says.

For Kenneally, the Think Lab shows that the school is “alive and vibrant,” a subject he says he was often questioned about when he started.

“People would always ask me, ‘Is Kennedy going to make it?’ ” he recalls.

“I tell them we’re debt-free. We’re spending money on programs. Our kids are walking out the front door with skills to enter the real world,” he says.

And for Consiglio, who frequently pats her heart when speaking of them, the students are the bottom line.

“I want to give them a place where it’s OK to try and it’s OK to fail – and we’ve had some of those too – because this is where we practice and this is where I teach you how to be in the real world,” she says.

YOUNGSTOWN, Ohio — The Ohio Procurement Technical Assistance Center at Youngstown State University has announced a new pilot program, in collaboration with the Ohio Department of Development, aimed at connecting local companies with students. The Procurement Internship Program will train…

YOUNGSTOWN, Ohio — Jillian Jakse arrived at Youngstown State University from Columbus three years ago, and after falling in love with the city, she doesn’t plan on leaving. “I came here and I fell in love with Youngstown, so I’d…

ROOTSTOWN, Ohio — Northeast Ohio Medical University is moving forward with plans to pursue a college of dentistry after presenting a needs assessment to the NEOMED board of trustees during their quarterly meeting. The board granted approval for the college,…