YOUNGSTOWN, Ohio – The situation has become a familiar one for Mike Avey.

A would-be customer enters the new downtown location for Joe Maxx Coffee Co., only for Avey to say the shop isn’t quite ready to open yet.

“We’ve been getting lots of that,” Avey said Tuesday morning in his coffee shop’s new location in the Youngstown Business Incubator’s Semple Building downtown.

Joe Maxx is one of two restaurants preparing for openings downtown over the next week. One street over and two blocks to the east, the Kitchen Post’s owners are putting the finishing touches on its space in the Erie Terminal Building, 112 W. Commerce St.

Kitchen Post plans to begin operations with a soft opening 4 p.m. Friday, with days and hours of operation gradually increasing until the week of May 14, chef and co-owner Ross Fowler said. Avey is gearing up for a planned Monday soft opening, though he said he could begin serving the public as soon as Friday if all inspections are completed and permits received by then. 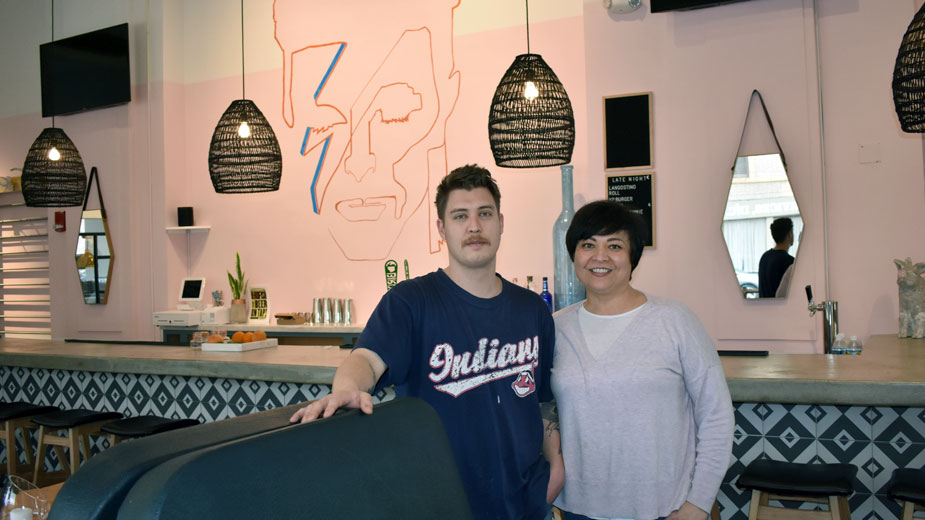 The decision to relocate the Kitchen Post from Struthers, where it operated since opening in May 2015, was “a no-brainer,” Fowler said. Fowler opened the restaurant after he graduated from the culinary school he attended in Pittsburgh, Le Cordon Bleu institute of Culinary Arts.

Avey opened his first Joe Maxx in downtown’s Realty Building eight years ago this coming November. When the lease for the ground-floor space came up for renewal, he and the owner, NYO Property Group, “couldn’t come to terms,” he said.

“I’ve actually looked at this space for six years in this end of town,” Avey said. That end of downtown was “way underserved” by restaurants and the available space was a “marvelous” place to open a café. He saw potential customers from YBI’s campus as well as neighboring buildings on West Federal Street, including the Home Savings building, the George V. Voinovich Government Center and the Mahoning County Children Services building.

“It’ll be nice to have a coffee shop on our end,” said Corey Patrick, YBI’s director of marketing and communications. Joe Maxx will provide not only a place for staff and tenants to get their “caffeine fix” but also lighter lunchtime options, he said.

Fowler’s decision to move the Kitchen Post to downtown was spurred by the activity already taking place and prospects for the future, including the amphitheater and riverfront park project and downtown’s growing residential population.

Both restaurateurs are looking to take advantage of their new spaces and making changes to their menus and operations.

Though the square footage is about the same as in the previous location, the configuration of the new Joe Maxx space is “much different,” Avey said. Within the restaurant itself, seating will be available for about 24 patrons; he said he would pick up seating for another 12 in the lobby area, plus some outdoor seating.

“We’re going to be offering more in the way of food and baked goods,” he said. “We are definitely going to be bringing on more sandwiches and soups. We’re going to have a broad line of soups in the fall.” He also plans to add more grab-and-go type items.

Victoria Clark, manager, is optimistic about Joe Maxx’s prospects in its new location, based on both the number of potential customers in the YBI buildings and nearby businesses. The restaurant has gotten several calls per day from patrons asking when it will be open, she affirmed.

“We’re definitely going to be busier,” she said.

She also said she had “no idea” that so many people worked in the Home Savings tower.

“Business is going to be great down here, especially with the aesthetics of this shop” she remarked. “It’s one of those places where you can hang out, have a coffee, get a little sandwich, sit here and do work. It’s so nice and chill down here that I think it’s going to be great.”

The new Kitchen Post is growing its previous workforce from nine to 30 to accommodate patrons. “This allows us to get a little more into focusing on the experience of the guests,” Fowler said. “It’s not just a counter service space where you walk up and order food. You’re going to have a more attentive experience.”

Patrons who enter the restaurant will be greeted by a graphic image of the late David Bowie in his Ziggy Stardust persona. The image was painted on the restaurant’s wall by Linda Fowler, Ross’ mother and the kitchen Post’s co-owner.

“At our last location we had Bob Dylan on the wall,” she said. “It was always kind of a rocker theme in the design. [Ross] plays guitar, he’s into music and all his friends are musicians.”

Linda Fowler said she fully supported her son’s decision to move the restaurant to downtown Youngstown. Though she acknowledged some fans of the Struthers location might be reluctant to make the drive to downtown because of the distance or their feelings about coming into the city, she noted the drive from her house in Poland to the new location is only a minute longer than to Struthers.

Just around the corner, Bergen Giordani, co-owner and president of One Hot Cookie, which has operated at Erie Terminal for five years, was welcoming of her new neighbor.

“It’s the more the merrier,” she remarked. “The more reasons people have to come downtown, the more we all have to gain.”

People coming down to eat there will have the opportunity to see all the other dining, drinking and entertainment options, and possibly patronize those on later visits, she said. Then there is the potential traffic from people stopping into one Hot Cookie for dessert after having eaten at the Kitchen Post. One Hot Cookie’s Boardman location, for instance, draws customers from the nearby Blue Wolf Tavern, Suzie’s Dogs & Drafts and Mission Taco.

“Once people go out to dinner, they’re more apt to go out for dessert and really make a night of it,” she said.

Joe Maxx already is looking at expanding hours beyond those it operated at the Realty Building. Given the proximity to the DeYor Performing Arts Center, evening and Saturday hours – and possibly Sunday as well – are being considered to cater to people attending events and performances there, Clark said.

“We’ll see how it goes. If business is there, we’ll continue,” she said.