HERMITAGE, Pa. – A $22 million expansion at Joy Baking Group in Hermitage is “basically done” and will be operational in September, President and CEO David George said Tuesday at Penn-Northwest Development Corp.’s quarterly meeting.

The new production line dedicated to wafers, specialty cones similar to Drumsticks and inclusions – the items added to ice cream, such as chunks of Oreo in cookies ‘n’ cream ice cream – stems from Joy’s acquisition of BoDean’s Baking Group in September 2016, George said.

While Joy has traditionally been strong in the commercial and retail sectors, selling its cones to chains like Handel’s and McDonald’s as well as in grocery stores, it’s growth leveled off around 2013, George said, because of a combination of holding a large market share and stagnation in the industry as a whole. Acquiring a company like BoDean’s, based in Le Mars, Iowa, which sells almost exclusively in the industrial sector was an opportunity to enter a new market. The acquisition also brought Altesta, a subsidiary of BoDean’s, into the fold. Altesa operates two plants in Mexico and serves central and South America.

“It would have been a lot cheaper to build in Le Mars,” George said. “But we looked at the long-term and the benefits of having these machines in Hermitage really made sense. No. 1, it gets us close to eastern customers. No. 2, big customers like Walmart like redundancy like that. If something happens, God forbid, in Le Mars or Hermitage, we’d have the other factory to fall back on.”

Once the 150,000-square-foot building is up and running – machinery has already been installed and the line is going through testing – Joy will focus on delivering to industrial customers before turning attention to developing customers in the commercial and retail sectors for products from the line. Then, George said, all attention will be on developing new products.

He highlighted two projects in the early stages: a cereal bowl made of waffle cone and an ice-cream-cone coffee cup.

“As Starbucks and McDonald’s look to get away from plastic and try to eliminate waste, they’re looking for companies that make alternatives,” he said. “There are two big challenges [to the edible cup]. It has to hold coffee and hold that temperature and, number two, it has to be at a price that’s reasonable.” 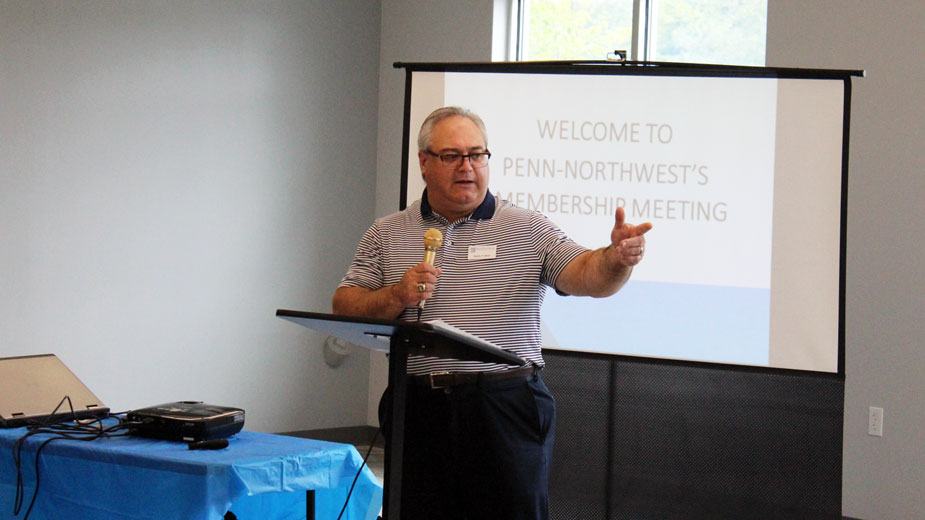 Also in the works is a deal to build a distribution center along Interstate 80. That site was previously shown to The TJX Companies when it backed out of building its warehouse in Lordstown, Ohio. While TJX reversed that decision and is moving forward with the Ohio project pending a referendum, the new company in Mercer County will be building a 1 million-square-foot center that will employ between 300 and 600, Seitz said.

Also boding well for the region is the approval of the construction of Mount Airy Casino Resort in Mount Pocono in Beaver County.

“None of the four counties in contention for this casino could satisfy the 800 employees on their own. A good chunk of those employees will come from Mercer County,” Seitz said. “And when folks are driving long distance to come to the casino, it doesn’t make sense for them to just stop at the casino. They’ll stop at the outlet mall or spend money in our restaurants and hotels. It’ll be a win for the whole area.”

The quarterly meeting was the economic development agency’s first of its new fiscal year, Seitz noted, and with that comes a new marketing campaign that will see improved digital strategies, including the addition of geofencing.

“It’s a way to put a virtual fence around a building, a floor, a room and get them our advertising,” he said. “We’re targeting all the site selection firms in the country and only the site selection divisions within industries we’re going after.We’re becoming more efficient in marketing, which means more quality leads.”

So far this year, Penn-Northwest has generated 133 leads and hosted 26 site visits, Seitz said. Among the available sites was the host of the quarterly membership meeting, the CHIP Building at [email protected]

The 13,000-square-foot building, developed by Community Hope Investment Partners, is move-in ready and listed for $2.5 million, though that price is negotiable based on the number of quality jobs, said CHIP vice president Jim Mastrian. Among the suitable tenants, he said, would be offices, light manufacturing, software development and data centers.

COLUMBUS, Ohio – Ohio has joined an industry coalition intended to bring together producers, end users, technology experts, and infrastructure development to advance the production, use, and delivery of hydrogen in Appalachia. The initiative, called the Appalachian Regional Clean Hydrogen…