Judge to Rule By Friday on Lordstown Rezoning

The lawsuit questions the constitutionality of a state law that permitted a referendum to be accelerated on the rezoning of seven parcels where TJX plans to build its 1.2 million-square-foot distribution center. Kontos ordered parties in the case to submit post-hearing briefs by 4 p.m. Thursday. “I hope to have a ruling by the following day,” he said.

The judge outlined his timeline just before permitting closing summations near the end of a three-hour hearing Tuesday.

Those attending the hearing included state Sen. Sean O’Brien, D-32 Bazetta, who inserted the amendment to House Bill 292 with the provision at issue; state Rep. Michael O’Brien, D-54 Warren; and U.S. Rep. Tim Ryan, D-13 Ohio, who has been working with TJX.

The hearing was on the request for a permanent injunction and declaratory judgment sought by the Committee of Lordstown Concerned Citizens and the organization’s treasurer, Brett Dickson, against the village of Lordstown and the state of Ohio. The 24 plaintiffs in the litigation are seeking to have declared as unconstitutional two sections of House Bill 292.

The bill, which the Ohio General Assembly approved in May and Gov. John Kasich signed n June, contained an amendment that permitted Lordstown Village Council to approve the rezoning of seven parcels from residential to industrial on a series of 3-2 votes, with one member abstaining. It also allowed a referendum on each of the zone changes to take place this summer rather than during the November general election, which would have been the situation absent the amendment.

During nearly two hours of testimony, witnesses and attorneys argued permitting the project to move forward would harm the plaintiffs, and challenged whether sections of the state law complied with the Ohio Constitution’s one-subject rule and uniformity clause.

Attorney David Nichol, representing opponents of the zone change, called on Dickson, William DeCesare and Martin Jones to outline how the TJX project might affect them.

Dickson, who described his house as about 1,000 feet from the TJX property, said he and his wife took “a hard look at the surrounding area” and investigated the property, including the zoning, when they purchased their home about two years ago. They were told that the village’s “founding fathers” intended that the property south of the turnpike, where his property is located, would be residential, he said.

“We felt protected given that it was zoned residential at the time and that that was the overall plan,” he said. He characterized the rezoning of the seven parcels in the center of the village’s most densely populated section as “a betrayal.” 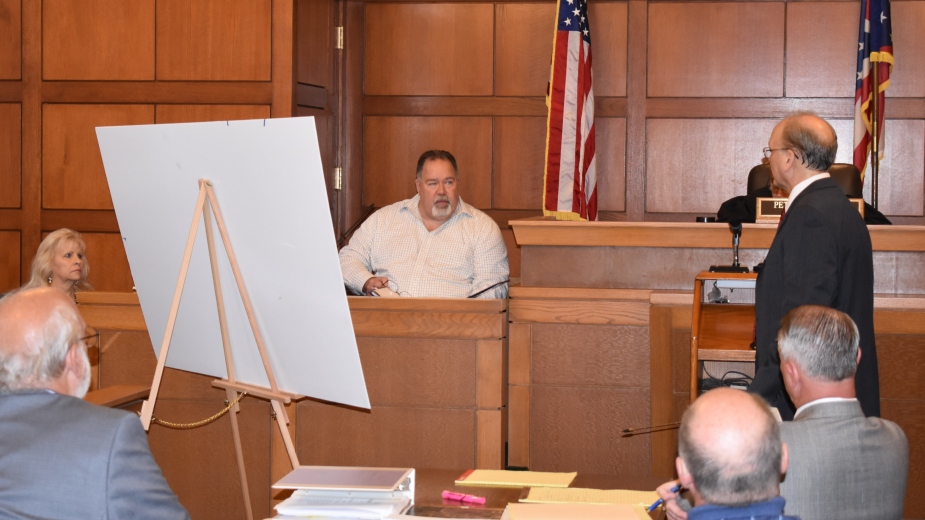 Dickson also expressed concerns about rainfall and drainage issues, particularly in light of recent rains, and diversion of traffic.

Attorneys for the defendants and Kontos pointed out the plaintiffs weren’t experts in some  areas on which they were testifying, such as site engineering for water mitigation or potential blasting. Dickson, who described himself as semi-retired, said he is an electrical engineer by trade and fixes distressed manufacturing businesses.

William DeCesare, a lifelong resident of Lordstown who purchased his property in 2006, reported his land is “maybe 50 feet” from the TJX site. He and his family have continued to make upgrades to the house, he said.

“We’ve done everything that we can afford and have time for,” he said. “We’ve made it pretty nice.”

He testified that he bought the 1.8-acre property because he thought the area was zoned residential, and he was “worried enough” about the nearby General Motors Lordstown plant being as close as it is.

Martin Jones said he and his wife, Karen — a member of village council who voted against the project — moved into the house they built on Hallock-Young Road in 1987. Since then, they have spent about $75,000 on upgrading the property, including recent upgrades to the kitchen, dining room and living room, as well as $15,000 on their deck in the last two years. Their property is less than 300 feet from the TJX property site.

Jones, who recently retired from GM after 37 years, said he and his wife had planned to do some traveling while maintaining Lordstown as their residence but that those plans are “up in the air” if the project goes through.

“We weren’t planning to leave the area. We prefer to stay here and travel to other places rather than move to one other place,” he said.

At one point, Kontos openly expressed irritation when Jones began to testify as to information he had heard from someone else. “What somebody else said to you is hearsay,” the judge said.

The plaintiffs said they received no response from TJX representatives as to why none of the sites in the village they suggested that were already zoned industrial were suitable for the project.

All three also testified, upon questioning by village attorney Matthew Ries, that they either signed or circulated the petitions for each of the referendums on the seven zoning changes.

Attorney Ted Lesiak, also representing opponents of the rezoning, questioned Lordstown Mayor Arno Hill regarding his role in the project. Hill said he learned last summer or fall that a company – not yet identified as TJX – was interested in the village. In January, he signed a nondisclosure agreement with the site selector working with the company, upon which he learned TJX was the company.

The mayor aid he was unaware of any other projects in the state of Ohio that met the requirements of H.B. 292 related to TJX, which applied to a project bringing at least 500 jobs and at least $50 million in investment to a village. The proposed TJX project is expected to cost in excess of $160 million and create 1,000 jobs once fully operational.

Following a midday recess, Reis moved for dismissal, arguing that the plaintiffs had not proven that the sections of H.B. 292 were unconstitutional or caused permanent harm. They also can’t argue that they lacked adequate remedy because they petitioned for and got the referendum.

“They got their vote and then they lost,” he said. “They can’t say they don’t have adequate remedy because they lost the vote.”

After Kontos denied the dismissal, Ries questioned Hill, who testified as to the financial impact on the village and the procedure for a zone change. He outlined the accommodations TJX has pledged to make to alleviate village residents’ concerns, including the placement of at least 100 acres of the nearly 300-acre site into a conservancy to provide a buffer for residents, construction of a swale to address water issues, and an earthen barrier topped by trees.

In his closing statement, Nichol argued that H.B. 292 deals with appropriations and that the provisions inserted into it to allow the Village Council vote — with an abstaining member not counted — go against the one-subject rule.

The tailoring of the provisions to meet the specific nature of the TJX project violates the uniformity clause, he said. A law can’t be enacted in general nature “that can’t apply to different areas within the state,” he asserted.

Reis challenged the complaint on the grounds of mootness. If the plaintiffs had concerns about the constitutionality of H.B. 292 and the specific sections, they should have taken action earlier.

“They didn’t,” he remarked. “They sandbagged their rights.” Ohio law is clear that by delaying action until after an election, the issue at question becomes moot, he continued.

Reis pointed out that according to the Ohio Supreme Court, the state legislature is given “a large degree of deference” and there is a “presumption of constitutionality” to laws that are passed.

The one-subject rule “does not prevent a plurality of different subjects,” he said. H.B. 292 deals with the funding of public entities, which is why Section 12 has a financial requirement.

The uniformity requirement is met because any village that met the criteria outlined in Sections 12 and 16 could take advantage of those provisions, he said.

Additionally, he said the provisions in the two sections already have expired, and reiterated that opponents of the zone changes had adequate remedy by holding the referendum permitted under the law.

While there has been “a lot of testimony” with regard to residents’ concerns, there hasn’t been any as to what might actually happen, said Nicole Koppitch, an assistant Ohio attorney general representing the state. That’s because the testimony is based on what individuals have heard and incomplete site plans.

“There simply is no evidence beyond speculation of any harm,” Koppitch said. “To bring a case, there means they have to show some concrete controversy or concrete harm that’s going to befall them. They failed to do that.”