The Keyword for Revitalization: Collaboration

YOUNGSTOWN, Ohio – The Taft Promise Neighborhood program has worked with 61 organizations, businesses and community groups to improve the 1.3-square-mile neighborhood.

Some of the names on the list are easily recognizable: Youngstown Neighborhood Development Corp. and United Way of Youngstown and Mahoning Valley.

Regardless of how often their names appear in headlines, each of the 61 plays a crucial role in the revitalization of Taft Promise Neighborhood.

“There’s room at the table for everyone,” says April Alexander, executive director of community organization. “That’s the key to meeting the needs of a neighborhood. It takes a city, all these factions, to meet the needs of a community.”

Across Youngstown, partnerships have been formed at every level to revitalize the city. Some partnerships are simple. Youngstown CityScape, for example, donates flowers to neighborhood groups to beautify their areas, provided that the group takes care of them.

Others, such as the alliance between Taft Promise Neighborhood and YNDC, delve deeper into the revitalization efforts. 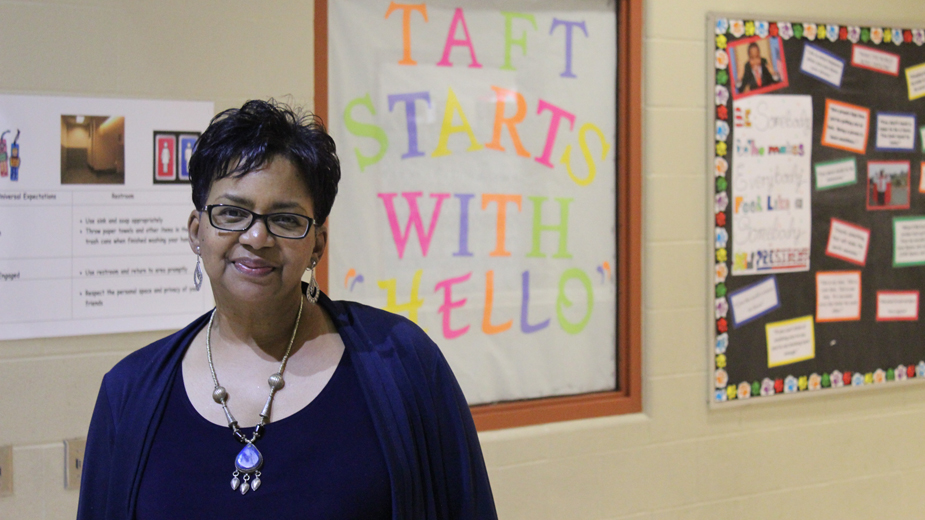 “Grassroots and corporate work good together. What corporate doesn’t know, grassroots knows. And what grassroots doesn’t know, corporate knows,” says Dionne Dowdy, who serves on Taft’s Jobs & Economy and Residential Engagement councils. “We can work within these tiers to get what we all need.”

Taft Promise Neighborhood has five councils. In addition to those Dowdy serves on, it also operates ones that focus on education, health and wellness, and neighborhood and safety.

Dowdy is also part of the Volunteers in Service to America, or Vista, team working at Taft Promise Neighborhood. Among the duties of the Residential Engagement committee, established last year, is organizing the canvassing efforts and creating initiatives “that contribute to building a better, stronger and more resilient neighborhood,” says the group’s 2017 annual report. Those initiatives have included things such as the Martin Luther King Jr. Peace March and handing out winter coats at Taft Elementary.

But there are bigger projects to be completed in the 106-block area bordered by Market Street, Indianola Avenue, Shady Run Road and Midlothian Boulevard. Among them is taking care of blighted properties. It’s here where larger organizations can step in.

Through YNDC’s neighborhood plans – all readily available online – vacant dilapidated houses have already been identified, along with safety and infrastructure concerns and proposed benchmarks for what needs to be done in each neighborhood.

“What’s in each of those plans is driven by the residents and the implementation of those is carried out by the action teams, which are composed mostly of residents that live in the neighborhood,” says YNDC Executive Director Ian Beniston. “They’re prioritizing down to ‘This house needs rehab. This house needs [to be demolished].’ ”

Among the five-year marks for the Taft neighborhood plan, put together in 2014 after meetings with residents, are bringing 10 houses into code compliance and demolishing 13 severely blighted structures. In the plan, 22 houses have been marked for demolition, 92 for code enforcement.

Those sorts of projects, notes Taft Promise Neighborhood Vista coordinator Chris Travers, are projects that community groups need the most help with, especially the planning aspect.

“For years, there was a scattershot approach. A neighbor would say, ‘This place next to my house is terrible,’ and if it got loud enough, they’d tear it down. That’s fine, but that’s one house among 5,000,” Travers explains. “When you have an organization that’s working together [with others] like this, you start developing strategies with feedback. … With more demolitions, it’s making more of an impact.”

Beyond just the physical assistance, though, there’s the not insignificant matter of money. In addition to writing the action plans and providing volunteers, YNDC serves as a fiscal agent, handling grant money for the groups. Among such groups YNDC works for is the Boulevard Park Block Watch.

“One of the things that’s important – it’s not flashy, but it’s critical – is YNDC works as our fiscal agent,” says Mary Danus, an active member in the Boulevard Park Block Watch. “When [someone] wants to donate money, they can’t just hand us money. It has to go through systems and YNDC has been wonderful for that.” 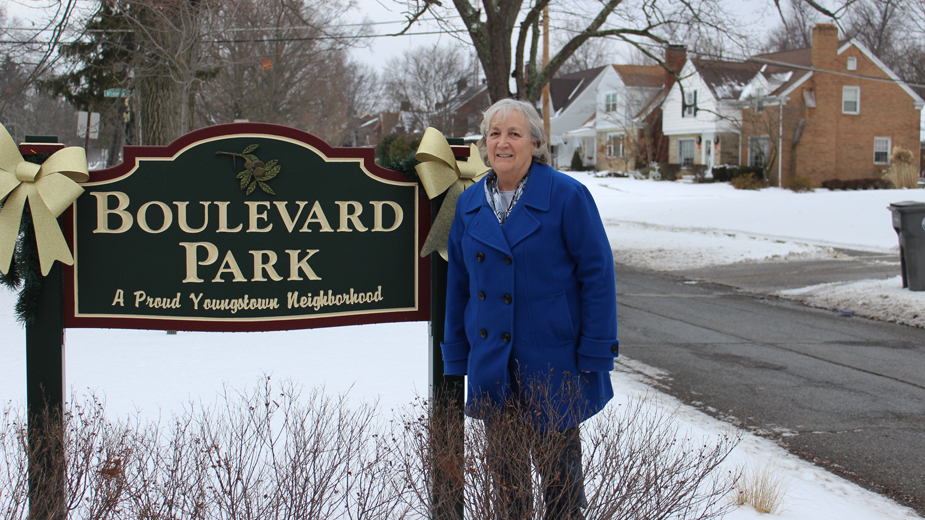 As fiscal agent, YNDC helps the community groups apply for grants and, when funding arrives – either from those grants or donations – manages the dollars.

“Most of the grants we’re talking about are $5,000 or less, so it’s not taking an inordinate amount of time for us to do,” Beniston says. “We have the systems and accounting in place to handle that. When you have an all-volunteer group, it’s not necessarily that simple and they may not have time.”

“I’d much rather see them devote time to planting trees if that’s what they’re passionate about than figuring out their accounting system or their 990 [tax form],” he says.

One of the major projects in Boulevard Park – which includes Rush and Euclid boulevards between Midlothian and Berkshire Avenue – is to maintain or replant the neighborhood’s signature silver maple trees.

Over the years, the effort has been supported by YNDC and WKBN through the TV station’s Caring for Our Community initiative.

“We found that a lot of people are concerned about trees,” says Danus, whose husband, Andy, also serves as the block watch treasurer. “We’ve planted 150 to 200 trees, probably closer to 200. People have been in our neighborhood long enough that feel they have an investment.”

Even though it’s something basic, those beautification projects buttress a sense of pride in communities. The leaders at Youngstown CityScape have seen it. When that group’s StreetScape annual planting event began two decades ago, only a handful of people turned out in the downtown. Now, 700 spread out across the city for the day. For work outside the city’s central business district, most is handled by neighborhood groups, to whom greenery is donated by CityScape.

“No matter what, going back 20 years to when we started, the two things that have stayed with us is that we’re grassroots-driven and that we’re collaborative,” says Sharon Letson, executive director of CityScape. “It has to be done and done well.”

Some of the CityScape’s most visible efforts outside the downtown can be seen in the Wick Park neighborhood and the park itself. There, the organization has led or played a role in projects including the renovation of pavilions, the installation of new gym equipment and new gates to close the park to traffic at night.

“When a project idea is presented, we help take it in a direction based on our experience and understanding of what’s possible to help fulfill that,” he says. “You’re there to provide guidance for what residents want to see happen.”

Even things as simple as art projects take guidance. He cites the art installation on the fence outside the WRTA depot along Mahoning Avenue.

Initially, Letson and Kidd say, the plan had been to do a mural on the archway of the old Lake Erie & Eastern rail line. Upon inspecting the overpass, they found they couldn’t afford the repairs to make it usable. So, they turned their attention to a spot a stone’s throw away.

“After 20 years, we have a sense of what will work and what won’t work,” Letson says.

And in those 20 years, those who’ve worked with CityScape since the beginning, including Letson, have seen the changes that collaboration can bring.

“It’s exciting that we have all these people who truly are interested in the well-being of the city. As an organization, we look at our piece as the core of the city, the downtown,” she says.

While YNDC has been around only since 2010, Beniston and Hetrick have made changes in the way revitalization work is done in Youngstown.

“When we first did the neighborhood plans, the sense I got in neighborhoods across the city was that their area was declining and they felt helpless,” Hetrick says. “There’s been a shift in thinking about how neighborhood change happens and people are feeling more positive.”

The collaborations have led to more data available to groups across the city, from how many dilapidated houses are on a particular block to how many trees and sidewalks a neighborhood contains. That data, often compiled with the help of groups such as Taft Promise Neighborhood and Boulevard Park Block Watch, further revitalization plans.

“Ten years ago, if I asked someone how many trees were planted or how many houses were demolished, it’d take them weeks, if ever, to get an answer,” Beniston says. “We know things are happening and where [they’re happening] so those neighborhood leaders know they have a voice in what’s happening.”

The domino effect continues from there, as those neighborhood leaders such as those in Taft Promise Neighborhood can then use that voice to communicate to residents changes in the works and adjust accordingly to improve their area.

“We’re trying to empower our neighborhood,” Dowdy says. “Changing lives is the best thing. When you see someone who’s been at all these meetings or benefited from resources and they say, ‘Thank you,’ and that their house is cleaned up, or they have a job, that’s the best thing.”