WARREN, Ohio — Jim Landino’s purchase of Backyard Buddy Corp. last year fits into the plan he had when he sold Sunbelt Transformer Inc. several years ago. Landino now is preparing to reposition the company to target markets beyond the backyard mechanics.

Backyard Buddy will now become one of three brands of motorized lifts targeted primarily at the automotive market, and will be manufactured by Landino’s JL Industries, as the fabricating business is now known.

“Part of the plan after I exited from Sunbelt was to get back into some sort of manufacturing business,” Landino said. “I always wanted to have my own fabrication shop.”

A friend introduced him to Backyard Buddy’s owner and president, Larry Gross, who was preparing to retire. Originally intending to establish his own shop, which would have taken time, meeting Gross provided Landino the opportunity to switch gears and purchase an operation with an ongoing shop, personnel, facility and “a product line that we didn’t know that we were going to have,” he recalled.

Manufacturing the motorized vehicle lifts represents about 96% of the fab shop’s output, and Landino acknowledged he wants to grow the outside business even as he expands Backyard Buddy production.

Among the areas of growth is the Backyard Buddy market itself. The prior owner targeted to individuals who like to work on their own cars rather than having repairs or upgrades done by a mechanic or service shop.

Now Landino is putting the pieces in place to go after another portion of the market that he sees as particularly lucrative: collectors. When these potential customers — interested in high-end vehicles such as Corvettes or Porsches — look for cars, “two always ends up as four and four always ends up as eight,” he said. 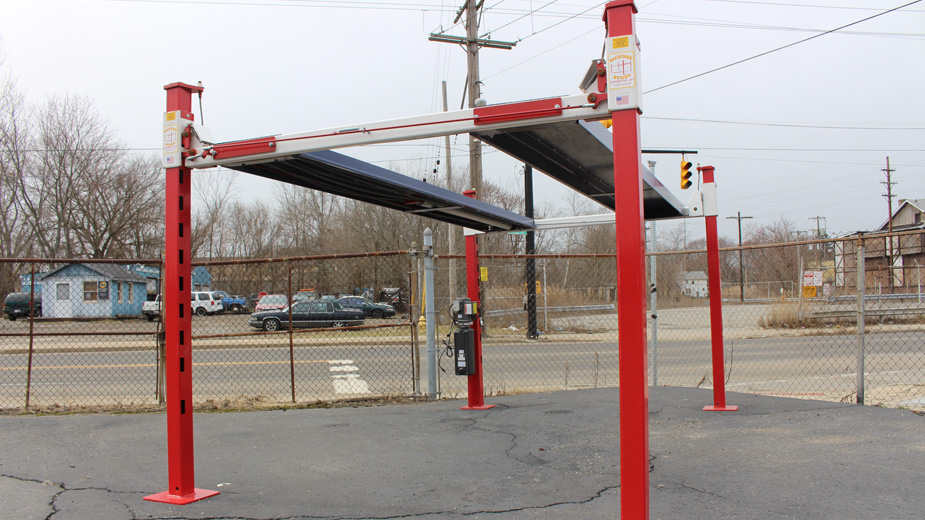 “We have really not gone after that market at all,” says Lauren Lindvig, managing partner of Bliss 360 Marketing, Warren, which is working with Landino on the repositioning.

Past customers in the collector market already include prominent actors and athletes, many of whom purchase the lifts through third-party buyers.

“There’s a big opportunity out in the collector space,” Landino says. “We know that Michael Jordan picked up 20 of our lifts through an intermediary in Jupiter, Fla., for his new house. Red and black was the theme of the day.”

Backyard Buddy, still targeted to the backyard mechanic segment, will become one of three brands the company sells, Lindvig says. Another, the Utility Series, is aimed at recreational vehicles and already is available.

The company is working on a redesign for the brand targeted at the high-end collector segment, Steel Valley Lifts, which will become available in the coming weeks, she said.

The Steel Valley Lifts products will be tweaked to make it look more sleek, Landino said. He also is looking at innovations such as a smartphone app that would allow customers to control their lifts with their phones.

Beyond that, he foresees using the lifts not just to support cars but also to allow customers to utilize them to store seasonal items — such as lawn mowers and wheelbarrows or winter tools — above their vehicles.

In terms of marketing, the company is looking at what has been done in the past and evaluating how successful those efforts have been. “For the places that we’ve had success before, we’ll stay there,” Lindvig says.

The strategy also includes improved messaging that combines traditional and digital marketing, and an improved website with videos to better convey information about the products.

“That’s where we need to be to reach the new audience of tomorrow and the people who are buying now,” she remarks. “They’re not digesting information the same way that they were when Larry [Gross] started this company. That’s just the transition that we need to make along with the rest of society.” The upgraded website is expected to go live soon and the rollout of the new marketing in the next few months, she says.

Landino also says he would like to diversify beyond the current direct-to-customer model and establish a sales channel with distributors, potentially manufacturing a private-label line for automotive parts and accessories suppliers.

Landino is planning for investments in the shop itself and expanding what the company does even beyond the core lift lines. Those plans include a $1.5 million upgrade to the electrical service in the building and installation of a powder coat line that will expand the shop’s capacity and potential, he said.

Over the next year, Landino expects to introduce automation to the shop. Though he doesn’t anticipate the investment to expand employment tremendously – the business now has about 20 employees — it will allow the shop to “get more throughput with what we have.” Employee tasks will require more brainpower than manual power, he said.

One potential area for expanding employment is onsite assembly for customers, from surgeons who need to be concerned about injuring their hands to just people who prefer to have others build their lifts for them.

Brandon Scott, shop operator, has been with the company about 10 years. He is encouraged by what he has heard so far from the new owner.

“This has been kind of the joy of the whole thing, Landino says. “I thought we might have a big falling out with the manpower since there’s such a big cultural shift in how we’re doing it and how I’m doing it versus the previous owner.

“It’s really been quite heartwarming,” he continued “There are really good people here.”

Beyond the brand expansion, Landino said he wants to do more in terms of custom sizes and colors. “Larry never wanted to get into that but that’s really where the opportunities are,” he said.

The company faces heavy competition from foreign competitors with similar designs and at a lower price point, he conceded. “There are nuances that make ours different and much better, but to a normal customer it’s sometimes hard for them to see, he said. His lifts “hardly move,” making them safer for people to walk around and underneath, he noted.

“If I showed you a competitor’s, you’d literally be scared,” he remarked.

Emphasizing the quality and craftsmanship is a key component of the marketing, Lindvig acknowledged.

“When you’re buying this kind of product with that kind of price tag, you want to know what you’re getting,” she said. “It’s not just the lift. It’s the people, it’s the quality, it’s the process behind it that they’re buying into as well.”