NEW CASTLE, Pa. – There have been plenty of developments over the past year that Lawrence County ought to be proud of, said the director of the local chamber of commerce, but the economic future of the county relies on a long-term vision for development.

“Probably for the first time in the history of the community, we have more than $1 billion in capital investment in our community,” said Alex McCoy, executive director of the Lawrence County Regional Chamber of Commerce, at the agency’s annual dinner Wednesday night. “We’ve got the Hickory Run gas-fired power plant currently being built. Ellwood Group is doing a 120,000-square-foot expansion in downtown New Castle adding a remelt facility.”

UPMC Jameson is also making investments and Kansas-based Container Services Inc. – the company best known for producing the bear-shaped bottles honey comes in – opened a 45,700-square-foot plant in Neshannock Business Park, its first expansion outside of its home state. The plant has already made more than 1 million bottles, McCoy reported.

While these are outstanding developments, what’s just as important are the long-term moves that position the chamber to draw in more businesses, both from within and without. Those moves, McCoy related, began in 2017 with the merger of the Lawrence County Economic Development Corp. and the New Castle Area Chamber of Commerce.

“When the chamber and economic development [agency] came together in 2017, we adopted a program of work,” he said. “That’s not just a political document or a sales tool we pull out to show people for why they should join. It’s a guiding document and we’re living up to it.”

Among the highlights: the relaunch of the Leadership Lawrence County program, which had 17 participants last year; an increase in member events such as quarterly breakfasts with legislators; the launch of a new website and member directory and the development of a master plan, known as Forward Lawrence.

That big-picture vision will serve the community well – the chamber, area businesses, government leaders and everyone else involved in development, said Al Latimer, keynote speaker and principal at Summit Chase Consulting. He has spent 35 years in the economic development field, including 18 as the vice president of Florida’s job-creation agency, Enterprise Florida, serving under six governors.

“It all starts with a big vision. That’s not just a vision statement designed to motivate people in and of itself. It’s a statement that has to be lived, breathed and incorporated into the fabric of every organization,” Latimer said. “The communities that are going to be successful are the ones that can harness their social capital. They understand that we’re in the Information Age and will be constantly looking for informational partners to feed them information they can analyze and use to build strategies.”

A major part of that strategy is developing the next generation of leadership. Through Leadership Lawrence County, 17 young professionals took part in a curriculum developed by the University of Georgia Fanning Institute of Leadership Development. 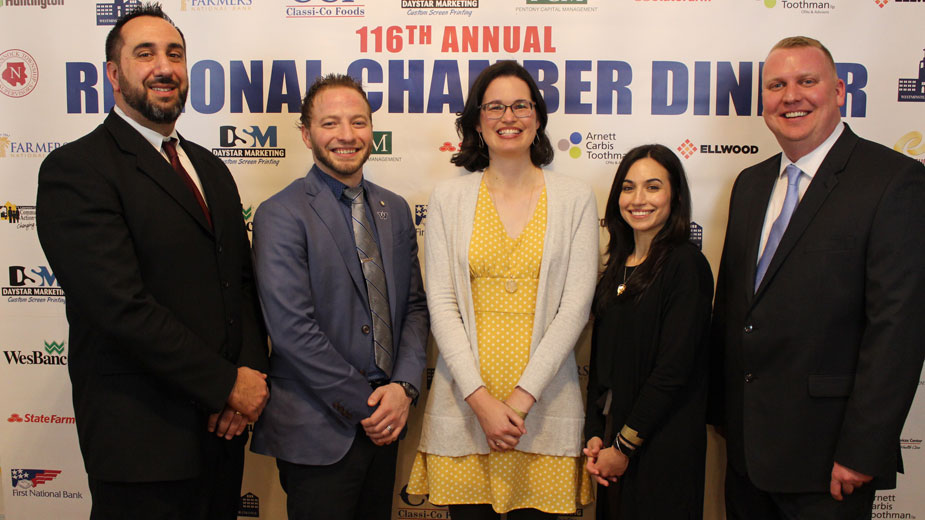 “What I’m seeing from young professionals in this community is a commitment to service, to people here, to being part of the change people want to see happen,” said Angie Urban, part of the Young Professionals’ leadership team. “We’re seeing folks trickle up in leadership roles, finding opportunities on boards of directors and workplace.”

What makes that segment so crucial, beyond just the five honored, is the changes in the area over the decades. Between 2001 and 2016, Lawrence County and its neighbors – McCoy pointed to “two counties in every direction” – lost a total of 166,00 people. Since the 1970s, Lawrence County alone has lost 21,000 residents.

“We have fewer workers for our existing businesses, fewer customers for our stores, fewer children in our schools, fewer taxpayers to maintain our infrastructure and quality of life. We have to address that population growth so we can have a healthy business environment,” the chamber director said, noting that today, just over a quarter of the county’s property taxes are paid by 6% of properties.

By attracting entrepreneurs and fostering a community of young leaders, Lawrence County can build itself for the future.

“One of my mentors described his community to me as ‘the dirt God needed to fill the hole’ and all communities were that way,” he said. “It took leaders who were willing stand-up and create a vision, attract the people and make investments in the community to see it prosper. Leadership affects culture and culture permeates every community and every business organization.”

In the coming year, the Lawrence County Regional Chamber will continue its partnership with the Small Business Development Center at Duquesne University, which last year worked with 33 businesses in the county and helped secure $300,000 in bank financing and created 11 jobs.

And in October, the agency will partner with two neighboring organizations – the Youngstown/Warren Regional Chamber and the Shenango Valley Chamber of Commerce – to host a regional business expo that will highlight tools, programs and best practices in the regional and economic development.

“We have some incredibly amazing individuals making contributions to our community. It’s not all doom and gloom,” McCoy said. “There are still amazing people here that we need to lend our credibility to give them a voice and make it a community that attracts young people in the future.”

by Boardman Schools Fund for Educational Excellence - 12 hours ago

By Aaron TervoEDCOM Board Member New Wilmington, Pa. – The New Wilmington Economic Development Committee, formed in 2015, set a mission to improve the community through civic programs, projects and initiatives that add public value to those who live, work,…

By Guy CovielloPresident and CEO, Regional Chamber YOUNGSTOWN, Ohio – The Youngstown/Warren Regional Chamber experienced unprecedented growth in 2022 with a record 750 new members resulting in a membership of more than 2,900. As the third-largest chamber in Ohio, our…