COLUMBIANA, Ohio – Moving to Columbiana County from Texas four months ago, Rick Perez was unfamiliar with his new home as he took a job as director of business development and marketing at East Liverpool City Hospital.

To meet people and learn about the county where he put down roots, he joined Leadership Columbiana County, a nonprofit program that provides classroom and hands-on experiences to develop leaders in the county.

“I’m brand new to this market,” Perez says. “I hope I can leverage my strengths in order to help Columbiana County from a health-care perspective, create some great connections through networking and become a pillar within the community.”

Perez learned about Leadership Columbiana County through his boss who was contacted by Amanda Frost, executive director of the program. Every year, Frost reaches out to county businesses to solicit sponsors for employees to participate in the program.

“It’s a great program,” says Frost, who has led it 11 years. “Every year we go through the program, I learn something new about the county – and I grew up here and have lived here my whole life. It amazes me how many positive things are going on.”

Leadership Columbiana County was founded in 1999 by a group of individuals who wanted to plug the “brain drain” in the county, Frost says. “They wanted to make sure that we kept our youngest and our brightest, as well as those who have made themselves successful in our county.”

“A lot of people think there’s no job opportunities or good things happening in our county. So we really try to focus on the positive, as well as some of the negative things going on and how can we fix them,” Frost says. “Instead of saying, ‘This is a problem and woe is me.’ We say, ‘There is a problem. What’s our solution?’ ”

One problem that Leadership Columbiana County found is after students graduate from high school they tend to leave the county to look for jobs elsewhere.

A solution to this problem was to start Junior Leadership Columbiana County to mirror the adult program with special sessions aimed at developing leadership skills for students in grades 10 and 11.

A four-month pilot program was launched in January.

“The real reason for starting the program is to keep our youth here,” says Katy Mumaw, director of Junior Leadership. “We want them to realize all the wonderful things going on in Columbiana County, so throughout those sessions we show them what’s happening in the county.”

To help fund the high school program, the 2017 class held a Zombie 5K Run as its fundraiser project. The Brightside Project in Salem received $3,950 from the run and $3,950 was donated to start Junior Leadership Columbiana County, along with a $600 grant from The Dale Hileman Legacy Fund Grant.

School counselors nominate students for the program who show leadership potential. Among them is Jade Rector, an 11th grade student at Salem High School who took part in the pilot program.

One of her favorite sessions was when an executive from Ohio Pet Foods in Lisbon discussed the pet food the company manufactures.

“I’m a very big animal activist so learning about that was really interesting,” Rector says. “I got new insight on that subject.”

Rector enjoyed the pilot program so much that she joined again for Junior Leadership’s first full-year program.

“I made a lot of friends last year and I can meet new friends this year. It’s a really cool way to grow as a person,” Rector says.

One of the new students in this year’s class is Grace Beil, who is in 10th grade at David Anderson Junior/Senior High School in Lisbon.

“I’m always open to learning from experiences and not just reading from a book in school,” Beil says. “I think it’s going to show me different careers I could go into since I’m not really sure and I’m open to everything right now.”

In one of the sessions, the students will get a tour of the Kent State University at Salem campus. “I’m excited to learn more about the educators and their experiences,” she says.

The adult and junior programs will end with a combined graduation ceremony in May for the students, adults and their families to attend and will hear from a keynote speaker. This past year’s speaker was Jim Tressel, president of Youngstown State University and former Ohio State University head football coach.

“When we look at social media, it portrays this age group as low-functioning or on their phones and it’s not a good description of their potential,” Mumaw says.

“The students we have in this program are amazing. They have so many great ideas and ways they want to contribute to society. We’re just supporting that and being a resource for them,” she adds.

The 2019 adult Leadership Columbiana County class has 14 members and kicked off with a breakfast Sept. 12 at Das Dutch Haus Restaurant in Columbiana. Afterward, participants headed to Camp Frederick in Rogers for team building exercises, which included a ropes course. 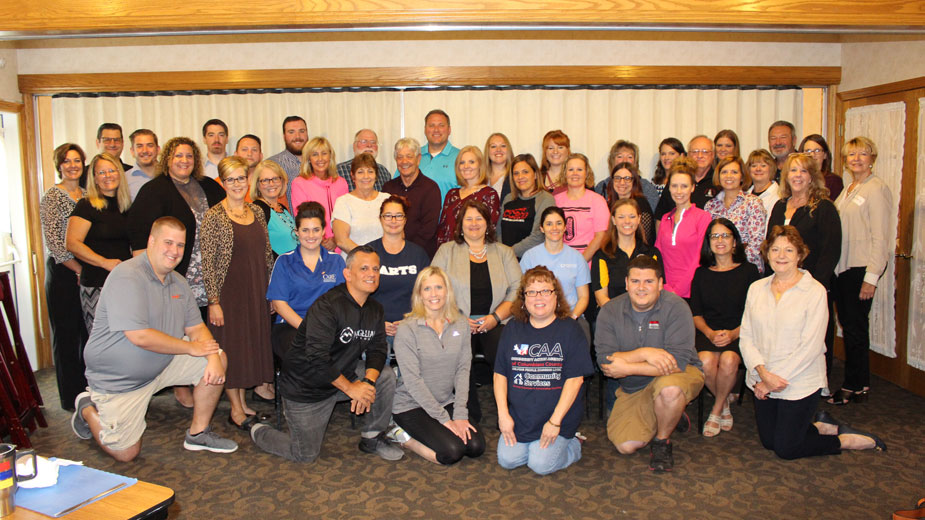 Pictured: Members of the 2019 class of Leadership Columbiana County and alumni of the program get together at last month’s kick off breakfast.

“They stood on logs trying to help each other get across those and doing a lot of problem solving so they form as a team,” Frost says. “They’re all from businesses, governmental agencies and school districts that operate within our county, so the class has a really wide variety.”

Alumni and sponsors of the program attended the breakfast to give advice and share favorite memories from Leadership Columbiana County.

“One of the days is focused on media,” says Leslie Biastro, who graduated in the 2018 class. “We go to Youngstown and [WFMJ] takes us on a tour. We got to watch a live broadcast and I got to be part of one of the Community Connection show on Sunday mornings.”

Biastro joined Crestview Local School District as a school psychologist in the summer of 2017 and came to Leadership Columbiana County for many of the same reasons that Perez, the new executive at East Liverpool City Hospital, did.

“I grew up in Mahoning County, but I spent a lot of years in Pennsylvania teaching,” she says. “I recently moved back. I figured this would be a great way for me to dive into the county I’d be working in, knowing where my students come from and having a better understanding of the area.”

When offering advice to the new class, Biastro says, “Be ready to step out of your comfort zone and learn some information that is sobering at times, but also learn there’s a lot of hope and strength in the community.”

Among some of the other favorite memories alumni mentioned were tours of the Federal Correctional Institution in Elkrun Township and Fresh Mark in Salem.

For Julie Needs, part of the 2014 class, there were too many great memories to pick only one.

“There were so many things I enjoyed,” says Needs, executive director of the Sustainable Opportunity Development Center in Salem. “When I went through, I met a lot of great people who I never would have met without Leadership Columbiana County because our paths never would have crossed.”

Every year, each class creates one project to complete that impacts a local organization of its choice through fundraising or a service project.

Needs says she enjoyed working on her class project, which was a program to help veterans. Her class set up a food pantry and brought in veteran resources from the county and Cleveland.

“We gave away over 20,000 pounds of food and toiletries and raised $8,000,” she says. “It was so rewarding to watch the people come through that day.”

The 2018 class held a fundraiser called Party for the Pantry, that raised more than $10,000 to benefit the Community Action Agency Food Pantry in Lisbon.

Since 2008, Leadership Columbiana County has raised more than $60,000 for local organizations.

The 2019 class will decide their project at the October meeting.