YOUNGSTOWN, Ohio – A company at the Ohio Works Business Park has developed a new system that reduces considerably the amount of energy used in metals processing, its principals say.

“This machine on their specific alloy used 34% less energy than the machines they were buying before,” he said. “That’s a huge number.”

Manufacturers all over the world are working to reduce greenhouse gas emissions and their carbon footprint, he said.  More important, using less energy also reduces the cost of production, especially as natural gas and electricity prices rise.

Induction Professionals’ electric induction unit is designed to heat aluminum “billets,” in this case, round bars that measure eight inches in diameter and 27 inches long.

The billet is pushed with a pneumatic cylinder into an induction heater that sits atop a large long metal cabinet.  Once the process begins, it is able to heat the billet from room temperature to 750 degrees in 6.5 minutes, Kearney said.

“That type of equipment can also be configured to do that same process in a minute,” depending on the customer’s metallurgical requirements, he said.

The heating unit reduces the billet from a hardened form to a more pliable state so the metal can move through the extrusion process. In this case, the equipment is bound for an aluminum extruder that manufactures products for a Tier 1 supplier to the aerospace industry, Kearney said.

“Our equipment is the first step in the process,” he said. “They need to have a hot billet to run through the extrusion press. These presses have a force of 3,000 tons.”

Customers in the aerospace industry are especially sensitive, Kearney added.

“Since this is an aerospace application, quality is critical,” he said.  “There can’t be any flaws in the material.”

He said suppliers in the aerospace industry are under pressure from major manufacturers such as Boeing and Airbus to reduce energy usage, and Induction Professionals’ new unit helps to address this issue.

“Every step in the supply chain, they’re asking, ‘What are you doing to reduce your energy consumption?’” Kearney said.

Initially, the company developed a prototype for an aluminum tube manufacturer that registered results ranging from a 25% to 27% reduction in energy usage.

“We did a series of about 100 development tests, and then based on the development testing, we came up with the design, put the prototype unit in, field trial, and did a rework,” Kearney said.

What sets the new unit apart from others in the industry is that Induction Professionals re-designed the heating coil to enable more efficiency, he added.

“The way we re-designed that coil and reconfigured it, ours are significantly more energy efficient,” he said.

Larry Metzinger, a foreman at Induction Professionals, said it took approximately two and a half months to build the new unit. Most of components were sourced from local companies, he said.

The metal frame cabinet, for example, was fabricated at Sodexo|Roth in Austintown, Metzinger said. “This is the second high-efficiency heater I’ve built,” he said, but has constructed approximately nine units total.

Kearny added that business is strong at the moment and its order book remains solid into next year.

“We’re busy right now,” he said. “For a company this size, we have a lot of gifted people from a lot of different backgrounds.”

YOUNGSTOWN, Ohio – The Youngstown/Warren Regional Chamber and Magnet are seeking nominations for the sixth annual Excellence in Manufacturing Award. The award focuses on a company’s longevity in business, growth, product or workforce innovation and achievement, according to the chamber.…

LISBON, Ohio — In recognition of October being Manufacturing Month, the Columbiana County Port Authority will host the first of what is expected to become an annual Manufacturing Workforce Appreciation Day. The event will be held Oct. 21 in partnership… 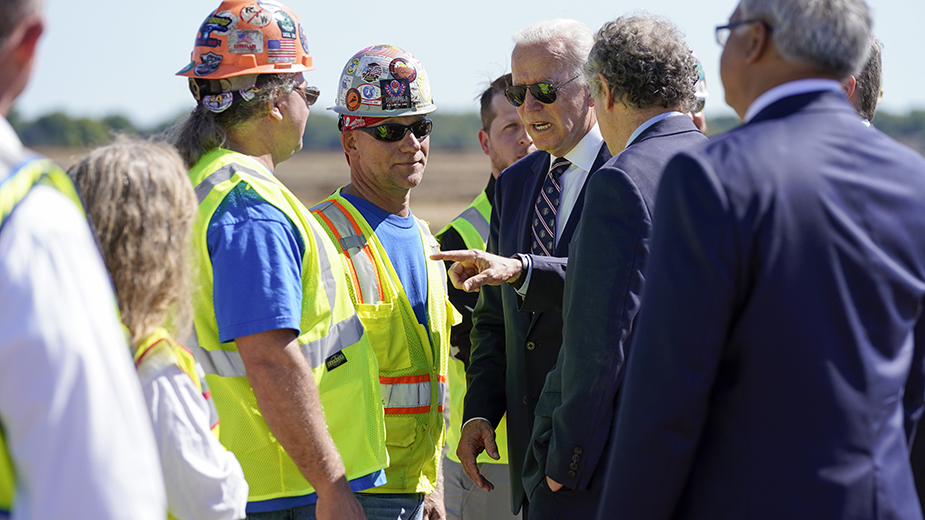 NEW ALBANY, Ohio (AP) — President Joe Biden is putting the spotlight on a rare bipartisan down payment boosting U.S. manufacturing as he visits the Ohio groundbreaking of a new Intel computer chip facility. Biden went to suburban Columbus to take a…