The Lordstown Planning Commission last night voted unanimously in favor of rezoning seven parcels of land from R-1 Residential to I-1 Industrial. It followed a 2½-hour hearing attended by more than 100 village residents and others.

The location of the project has become a source of friction within the village. Opponents have argued against rezoning the land and say there are industrially zoned properties in the village where TJX could build its distribution center. 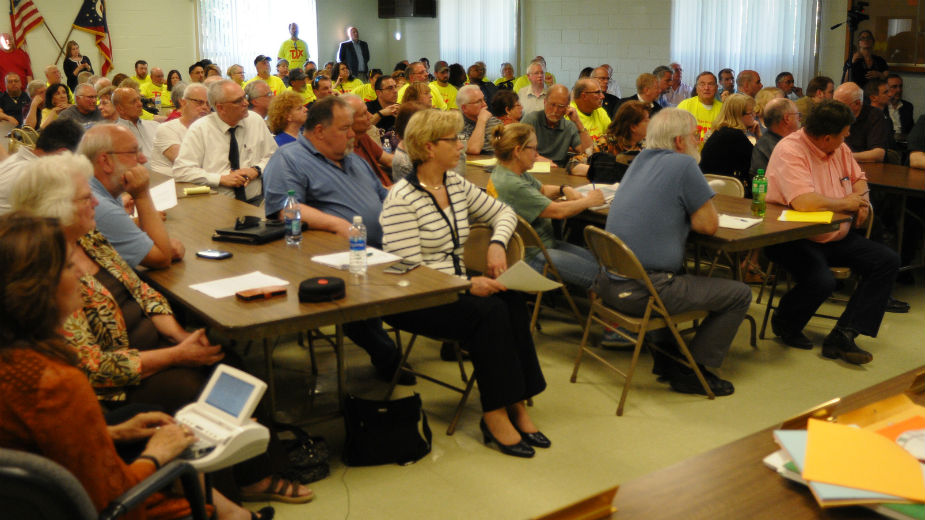 “Over the past two years I’ve traveled from central Virginia to New York to Ohio,” said Mark Walker, senior vice president of real estate for HomeGoods. “We landed in Lordstown because we felt this is a great place that has a great workforce. It’s got a work ethic. It’s got a commitment to excellence that we didn’t see in a lot of places.”

Within five years, the center will employ about 1,000 associates, most of whom will be full-time employees with comprehensive benefits, Walker said. Annual payroll when the center is fully operational will exceed $27 million.

Development of the 290-acre site is limited to 170 acres, with the remaining property serving as an environmental buffer, Walker said. Details are yet to be worked out, but he pledged the company would work with the village “to come up with a sensible assurance that that land will never be developed.”

In response to newly raised resident concerns, TJX is installing a berm and a swale on the site. In addition, the project will involve relocation of a portion of Hallock Young Road, which TJX will undertake and pay for, Walker said. 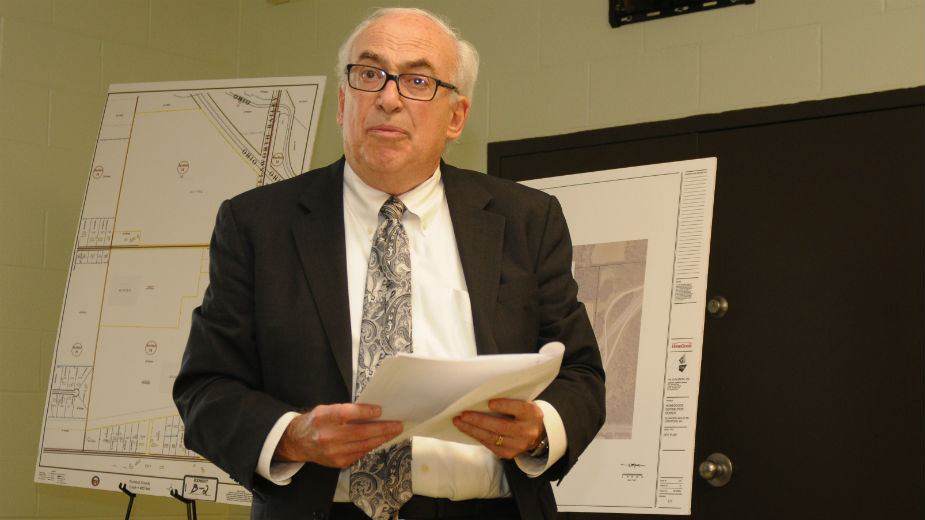 For about an hour, Members of the audience voiced opinions for and against the rezoning.

James Dignan, president and CEO of the Youngstown/Warren Regional Chamber, warned that the region “is getting older, poorer and smaller” unless something changes.

“The No. 1 export of our Valley is our youth and our talent,” he said. “If you want a place for your children to grow, if you want this Valley to turn the corner, support TJX, support rezoning and take a look at a real comprehensive plan for all of Lordstown. Not from 35 years ago but from 35 days ago. Look at it on a continuous basis.”

Phillip Eubank, a resident of Silver Fox Drive, which is near the site, said he initially opposed the rezoning. “I’m not thrilled about it. I’m not happy but it’s better than the original site plan we saw,” he said. “This isn’t the best solution for me in any way, shape or form. But it’s something that I can swallow, and I think it would be good for Lordstown.” 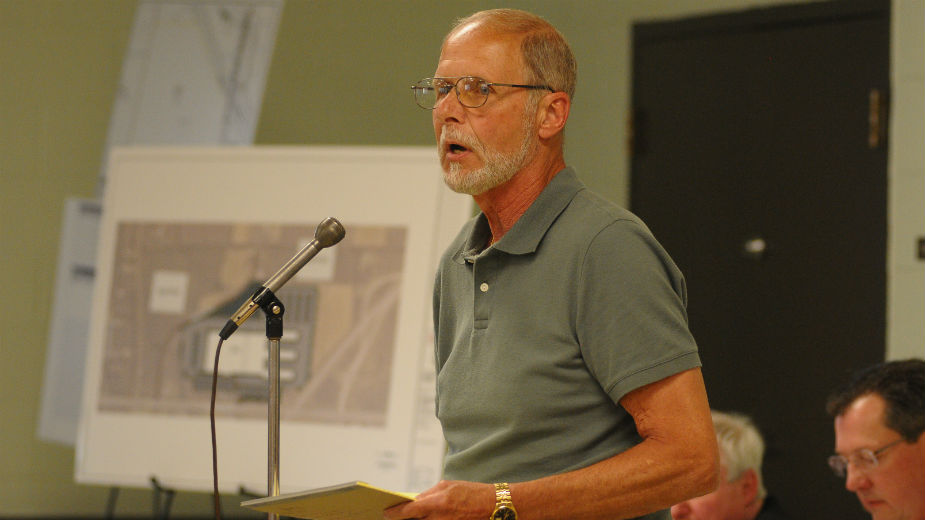 Among those speaking in opposition to the rezoning were Village Council members Karen Jones and Robert Bond.

After General Motors came to Lordstown and purchased several farms for its assembly plant, village leaders enacted zoning ordinances “to protect our residential neighborhoods from being destroyed,” she said.

Bond told commission members that their responsibility was zoning, not economic development.

“There is more than ample industrial acres in Lordstown for this project. It is not your job to find [TJX] the cheapest property to make zoned industrial to save them money,” he said. “The primary reason for a community to enact zoning is to protect what they currently have and to ensure orderly development. This is not what would occur if you make this change.”

Kathy Dickson of Pleasant Valley Drive, who said she represents 222 people who signed a petition saying they opposing the rezoning, said she and her associates want the project in Lordstown but not on residential property.

According to Dickson, there are three industrial-zoned sites that meet the criteria TJX has stated would be suitable for its project. She also accused the Regional Chamber, which worked with TJX over the past two years to identify potential sites, of steering the company to the property it selected.

TJX officials spent the past 30 days speaking with owners of alternative sites in the village, Walker said, but he could not go into specifics regarding the issues that prevented other parcels from being used. “We wish they would work for us. They don’t. This is the only viable site in Lordstown,” he said.

Several other opponents of the rezoning left the meeting as the commission voted in favor of rezoning each of the individual properties.

Supporters of the project – many of whom wore bright yellow shirts saying “TJX Right Project Right Property” – were pleased with the result of the meeting.

“From the beginning, I thought that this would be a good project for this area and the region as a whole,” Tom Cowie of Newton Falls said.

Warren Township farmer Harvey Lutz, who owns 121 acres he has optioned to TJX for the project, said he felt the hearing went as it should. Lutz drew wide media exposure with his proposal to site a chicken farm on the property should the TJX project fall through.

“It is the best thing for the community,” Lutz remarked. “[TJX is] working really hard on getting this right. You’re not going to please everybody.”

Bob Shaffer, a village resident whose property abuts the project site, said he looks forward to the 1,000 jobs and other benefits the project would bring to the village. “This is a win-win situation for Lordstown, Trumbull County and the whole Valley,” he said. 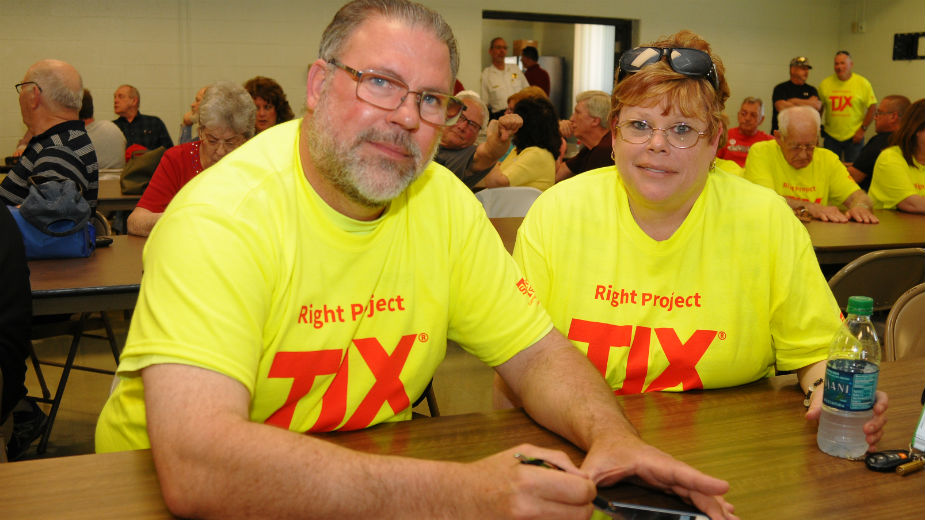 Property owners Bob Shaffer and Sherri Burchett, who live next to the site, support TXJ.

“We want to reiterate, especially to those who reside alongside the property, that we are committed to being a good neighbor to the Lordstown community,” Mastrangelo said. “We are confident that the enhancements we have made to our plan, which include substantial green space and forested area, berm and swale construction for water management, and road infrastructure to mitigate traffic, will minimize impact to them.”

TJX addressed or will address many of the concerns expressed regarding the site, said Lordstown’s mayor, Arno Hill.

“The residents who are adamantly against it, I hope we’ll be able to pull them into the fold,” Hill said. “You’ll never get 100% of the people happy. But I think the majority of the people in Lordstown after tonight will be happy.”

The planning commission will now forward its recommendation to Village Council for reading at its May 21 meeting, followed by another public hearing 30 says after that, Hill said.

Overturning the planning commission’s recommendation would require five votes, but one member of the six-member council has to abstain because some of his family’s property is involved, he said.

After three readings, there will be a 30-day period if anyone wants to initiate a referendum to overturn the rezoning.

“If nothing comes up, hopefully that will be it,” Hill said.

Opponents have vowed to pursue litigation and a petition drive to put the issue on the November ballot.