LORDSTOWN, Ohio – Glenn Wheeler has two grandchildren who are in college. Both are considering leaving the Mahoning Valley because of lack of opportunity here.

The Weathersfield Township resident, whose home is on land abutting the village, added his name to a banner to show support for TJX Companies Inc. as it considers whether to build a $160 million regional distribution center for its HomeGoods brand in Lordstown.

“We need 1,000 jobs. I can’t believe we have resistance,” Wheeler says. “We need this company and we need it right here in Lordstown.”

He was among some 600-plus members of the community who attended a rally Sunday afternoon at the Lordstown Schools track complex.

Massachusetts-based TJX is considering multiple sites in the Mahoning Valley and elsewhere after their initial choice for 290 acres near the Ohio Turnpike met with resistance from a group of village residents whose properties could be affected by a requested zone change from Residential to Industrial.

“Unfortunately, it’s become a firestorm for a variety of reasons,” Lordstown Mayor Arno Hill said. “At the end of the day, I think we should be able to get things straightened around.” TJX is “willing to jump through a lot of hoops to try to accommodate the residents,” he said as he led off the series of speakers at the 30-minute rally. 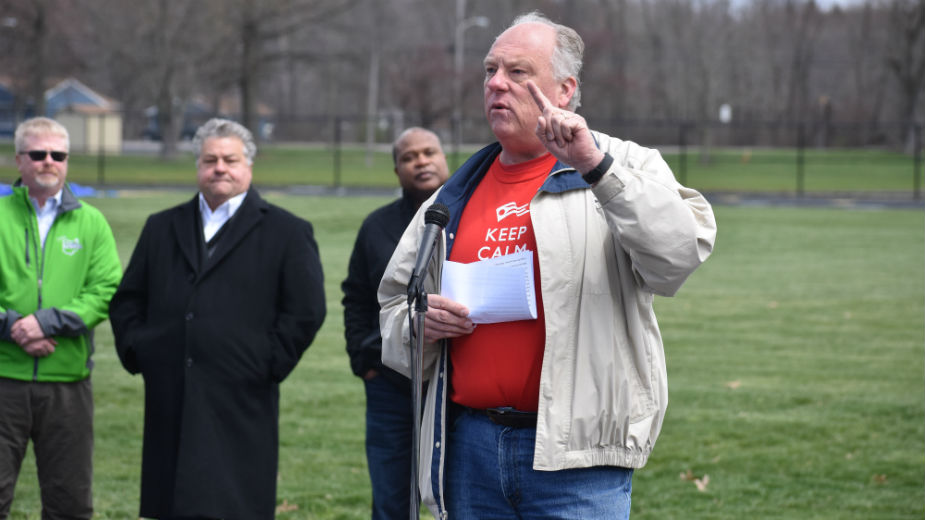 The distribution center is expected to create between 1,200 or 1,400 jobs, Hill said, up from the 1,000 that has been reported earlier. The attempt to land the project comes at a time when the General Motors Complex in Lordstown is preparing to cut its second shift and lay off some 1,500 workers.

“We can’t change the small car market in America to help bring more workers back to Lordstown, but we can control this,” U.S. Rep. Tim Ryan, D-13, said. “We have the ability to say ‘yes’ and make this happen for your schools, for your community.”

People attended from nearby communities because the project will affect the entire Mahoning Valley, Ryan added. 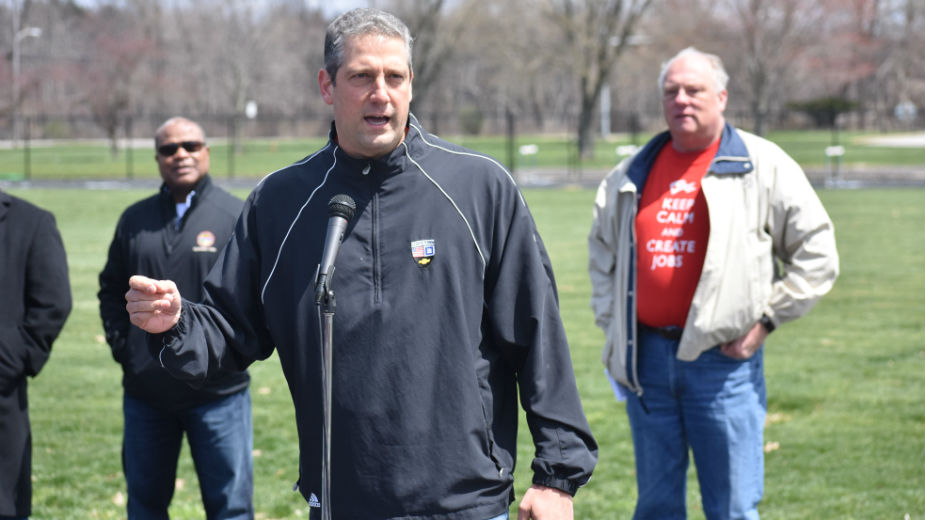 Harvey Lutz, the Lordstown land owner who has threatened to establish a chicken farm on the 121 acres he has optioned to TJX should the project not move forward, acknowledged he “went a little crazy” with his idea. But he said the stunt worked by moving the project back into the spotlight. “We can’t afford to let this go,” he said.

Upset at first because of how the project not moving forward would affect his property, as Lutz received more phone calls in support of project ,it came to mean more to him.

Among those attending was Regina Whitsel, Lutz’ sister and a Warren Township resident who lives a block from the Lordstown line.

Whitsel said her primary concern is the jobs for the community. About a decade ago, she recalled, her husband lost his job at Denman Tire when it went out of business. “We know what that’s like when people have to start over,” she said.

Darlene Lawrence, a Lordstown resident who attended with her husband, Chuck, said she is “100% behind” TJX.

“My kids grew up in this school. Both of us went to school here and we want to see this community stay alive,” she said. “We care about it. We’re retired but we care about the younger generation.”

“I believe in supporting local business,” Yoho, a local landscaper, said. “With economic growth comes jobs, and with jobs the Valley starts to thrive a little better.” 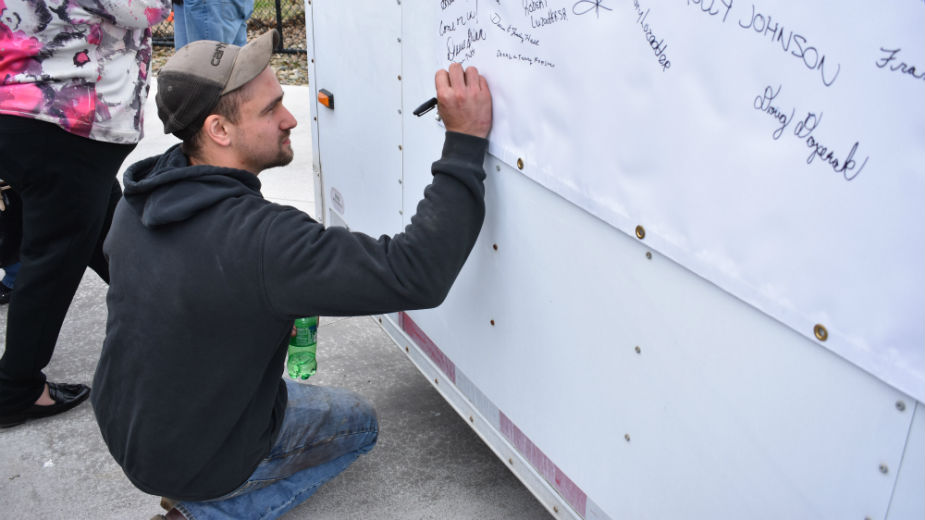 Kaleb Yoho, Warren, signs the banner of support for TJX.

The Lordstown Local School District now receives about $7,600 annually in property taxes from the land where TJX initially proposed building its distribution center, reported William Catlin, president of the Lordstown Board of Education.

“When the distribution center is completed, the school would be looking at approximately $250,000 a year. That’s a big difference,” he said.

Along with additional revenue for the school district, the TJX project has the potential to bring more students and attract long-requested amenities to the village such as a grocery store, drug store “and maybe even a Starbucks,” Catlin said to laughter.

The company is expected to negotiate a payment in lieu of taxes with the school district in return for any tax abatement, Mayor Hill said. There have been discussions between the district and the company about such a payment, potentially around $1 million, he said.

Hill called on residents to contact village council members and the school board to learn where they stand on the project. He also urged them not to back a threatened referendum if the village approves the zoning change. A referendum would go on the November ballot, putting the start of construction outside the company’s proposed timeline.

The event was aimed at countering the perception that opposition to the project represented the views of the majority.

James Dignan, president and CEO of the Youngstown/Warren Regional Chamber, said he couldn’t have scripted Sunday’s event better. The message of support is needed to counter the perceptions held by HomeGoods’ CEO that the message of opponents represent the views of the community, he said.

“The vast majority of what he’s heard has been negative rhetoric from those against the project,” Dignan said. “This is our opportunity to change that.”

TJX has been paying close attention to local media throughout the process, and it’s good for officials to see community support, said Sarah Boyarko, senior vice president of economic development for the chamber.

Boyarko, who has worked with the company for about two years, said she’s in daily communication with TJX, up through Saturday night. According to her, the company still is evaluating all its options for the project.

“Things like this certainly assist in sending the message that the majority of the people in our community, the village and beyond want this investment,” Boyarko said. “Ultimately the company still needs to make the best business decision.”

Not everyone attending Sunday’s rally was there to show their support. Gary Marr, a village resident who said his property abuts land that TJX is seeking the zoning change for, wants to know what the company’s plan is. Published maps about the project don’t show the road where his property is located, he said. “I’d just like to know what’s going to happen to that property,” he said.

Representatives of The Right Project on the Right Property, a group opposed to the zoning change, emailed a letter Saturday addressed to village leaders, the chamber and TJX.

In the letter, the group questioned news that the petition to re-zone the property had been withdrawn, believing instead that it had just been put on hold — a “bait and switch” its authors call “far from ethical.” The group also said the community had been “torn apart at the seams” due to mishandling of the project.

“We want TJX for the value they bring to the Village and we hope they continue to want the Village of Lordstown for what we can offer them, but not on residential land” when there is “viable” industrially zoned property in the village that would suit the company’s requirements, the group asserted.