SALEM, Ohio – Chris Herubin sets empty 12-ounce plastic bottles on the conveyor belt of a machine that will apply a front and back label onto each before it’s filled with cleaning polish and shipped to stores.

Milsek Furniture Polish co-owners Chris and Joyce Herubin bought the labeling machine years before moving into the Salem Industrial Park last October. The irony is that the machine was manufactured within a short walk of where Milsek is today.

“We bought our label machine seven years ago from CTM [Labeling Systems], who is right across the street,” says Chris Herubin, “and we purchase our labels from The Label Team, which is a couple doors down.”

Not long after Milsek moved its operations from Petersburg to Salem, a worker from CTM walked over to check up on the machine as a “welcome to the neighborhood gift,” he says.

This camaraderie between businesses is just one of many benefits he finds to being here.

“A lot of freight comes in and out of the park every day so if somebody calls and needs an order by tomorrow, we can rush and get that truck in here the next day,” Herubin says.

The grassy industrial park, scattered with small ponds and wooded areas, is centrally located between U.S. Route 62 and state Route 14, which creates easy access for trucks. The only traffic that enters and leaves the park is for business.

“The convenience of the trucking is a nice aspect,” Herubin notes, “and the roads are always kept clean in the winter compared to being out in the country.”

Milsek’s cleaning polish was formulated in 1914. Today the line includes the original polish with lemon oil, the original polish formula with orange-scented oil, a holiday-scented polish, as well as polishes for stainless steel, leather and vinyl, and gunstocks and barrels.

The polish is sold in stores across the Mahoning Valley, such as Giant Eagle, Marc’s and Ace Hardware, along with direct sales to Amazon.

Milsek is the newest tenant in the Salem Industrial Park, which has become a manufacturing hub in Columbiana County with a variety of businesses, some of which have been here since the park opened.

The Salem Area Industrial Development Corp. proposed the park in 1982 after finding the industrial areas in the city along the railroad had no room for expansion.

The development corporation began searching for vacant land and purchased the 104-acre Mundy Farm in anticipation of selling the property to the city of Salem to be developed with Community Development Block Grant monies.

Eighty-seven acres were deeded to Salem in 1984 and a year later the city received an Economic Development Administration award of $870,000 for infrastructure improvements.

By 1986, the park had officially opened with two companies in place and a third building under construction. Cost of the lots in Phase I were $2,500 per acre, the grant funds used to offset infrastructure costs. Among the first landowners was Hickey Metal Fabrication.

The family-owned business, founded in 1942 as Hickey Heating and Roofing, entered the metal fabrication industry in 1975. Hickey Metal bought the third lot and finished construction on its first self-built building in 1987 to lease to another company, says Leo Hickey, president of Hickey Metal.

By 1993, only one lot remained for sale in the park. The Salem Area Industrial Development Corp. encouraged the Columbiana County Port Authority to lend funds to Salem so it could acquire 38 more acres. That led to Phase II, developed with city monies. In Phase II, lots were $7,500 per acre.

Hickey Metal moved into the park in 1995 after being only a landowner. Since then, it has expanded with five of its six plants on 19 acres in both phases of the industrial park.

“The biggest benefit is we can have all of our locations fairly close and have access to U.S. Route 62,” says Suzanne Hickey, corporate secretary and treasurer for Hickey Metal.

The company employs 190 and expects to hire 20 more this year. It’s on track to complete in June a 45,000-square-foot expansion for a new office and manufacturing complex, its sixth plant, in June, Leo Hickey says.

Another company with early ties to the park, J. Herbert Construction, helped to build more than half the structures in the park, notes Vice President Scott Mingus. Today he has relationships with many of the business owners. He is prepared for some to return as customers when they expand. 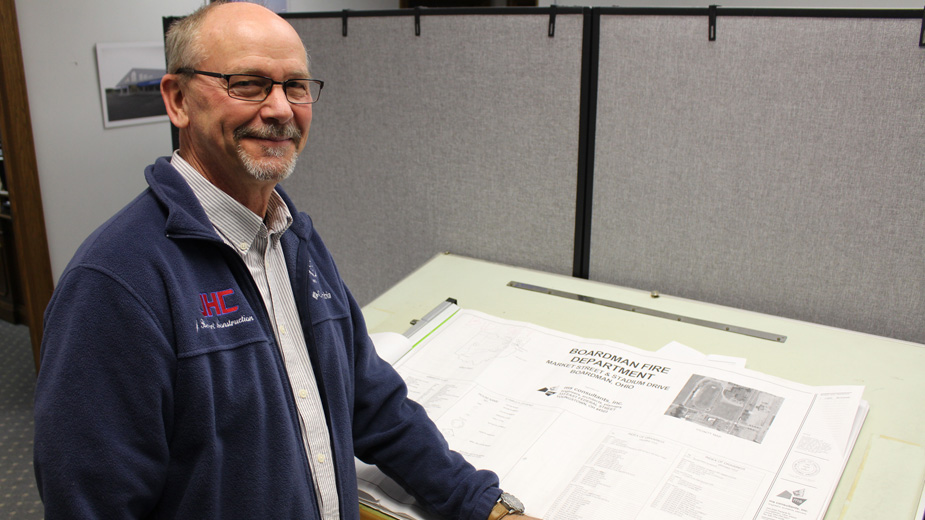 J. Herbert Construction, founded in 1982 as an industrial and commercial construction company, moved its offices in 1990 near the Phase II lots. “Because of its growth, we had to get closer to the clients we had in the industrial park,” Mingus says.

A major benefit for any owner who moves his business into the park is a 15-year tax abatement.

“Over that period of time, it’s a huge savings of about a third of the cost of your structure,” he says.

J. Herbert’s office sits on two acres and his company owns almost five acres in the second phase of the park. J. Herbert’s lot is the only space left for sale, according to the Sustainable Opportunity Development Center’s website.

Currently, J. Herbert has six employees and subcontracts most of its work. The company’s biggest current project is the Boardman Township fire station under construction at Market Street and Stadium Drive. Cost of the project is nearly $3.6 million and it is scheduled for completion in late spring.

J. Herbert is working alongside its neighbor in the park, Salem Mill & Cabinet, which is providing laminate-covered cabinets with plastic-laminate-countertops for the fire station. 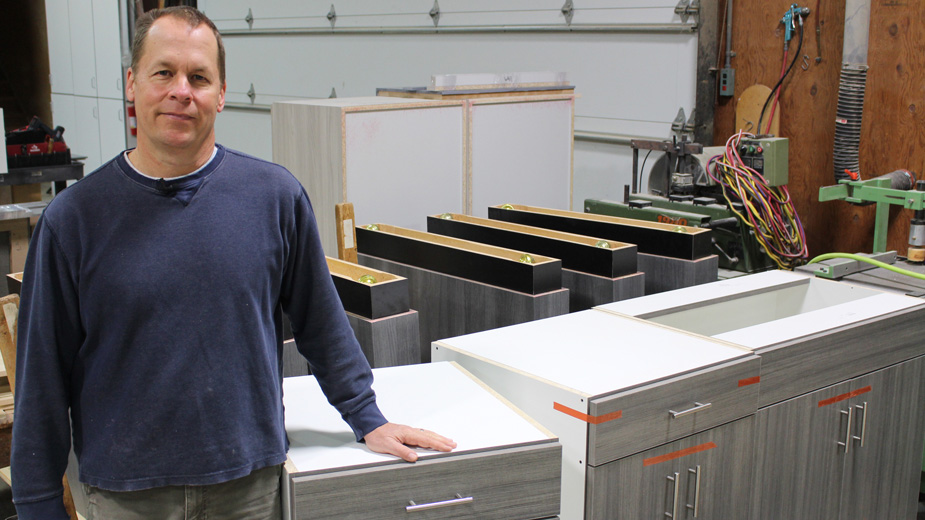 “Business has been increasing every year since I purchased the business and I have an optimistic outlook for this year,” he says.

The cabinets at Salem Mill are manufactured partially by computer-automated machines. One of the machines cuts all of the cabinet parts and prints a label on each.

The label can be scanned on a different machine, which identifies each part, such as an upper-cabinet side. The head of this machine goes over the piece and “knows” where to drill the holes.

When the cabinets are finished, Winters says they’re easy to ship, “since it’s an industrial park and the traffic here is of that same nature. There’s a lot of truck traffic, which means there’s a lot of access to moving things in and out.”

And Winters has shared his moving equipment with his neighbors. “If we need to share some resources between businesses, like a larger tow-motor somebody might have, those opportunities present themselves as well,” he says.

Across the street from Salem Mill & Cabinet is Star Grinding & Supply, whose customers come from around the country as well as within the park.

“We deal with Hickey Metal Fab down the street, CTM Labeling Systems right next to us, Columbus McKinnon, Mac Trailer Manufacturing,” says Jason Starcher, director of sales and marketing for Star Grinding & Supply. “We do a whole lot of people right in this close vicinity.” 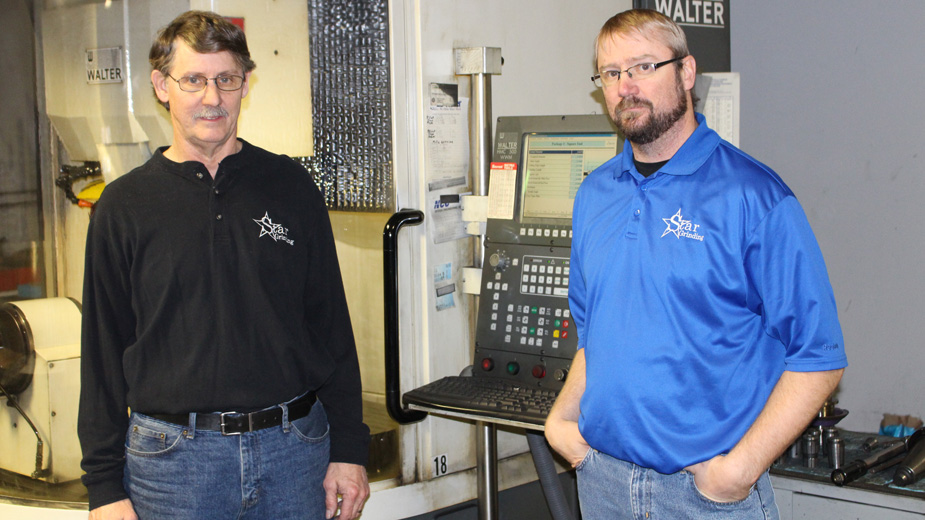 “We sharpen basically anything that they’re going to use to manufacture what they’re making,” Starcher says. “It helps them to cut down on costs, so they’re not buying new all the time.”

Larry Starcher founded the company in 2006 after 42 years in the industry. Star Grinding uses a Walter CNC (computer numerical control) machine to manufacture and sharpen its tools.

“All I have to do is fill in the information on the screen and it will do all the work after that,” says Larry Starcher.

Star Grinding is one of the only tool sharpeners left in the area, he says. Most big companies, such as General Motors Co., take care of their own tools, so Star Grinding works mostly with smaller to medium sized businesses.

For customers in the Salem Industrial Park, “It’s good for them because we’re right next door. They can come here if they need some new tooling in a hurry,” Jason Starcher adds.

“Salem is a centralized spot for manufacturing in the area,” he says “It’s been pretty ideal being here.”

That sentiment is shared throughout the park. “The area is very safe and it’s well maintained,” says Milsek’s Herubin.

“The Salem Industrial Park is a great place for small businesses to locate,” adds Winters from Salem Mill & Cabinet. “It’s a good place to run a business.”

Pictured at top: Chris and Joyce Herubin own Milsek Furniture Polish, which was established in 1914.