VIENNA TOWNSHIP, Ohio – Little more than three months ago, a large, empty field along state Route 193 in Vienna fronted the offices of The Builders Association of Eastern Ohio and Western Pennsylvania.

Now, the site is dominated by a sleek building with a metal and glass exterior that will serve as The Builders’ new headquarters when it’s finished in about two months, say contractors working on the project.

“We want to make this a focal point for many years to come,” says Sam Boak, president of Boak & Sons Inc. of Austintown and president of The Builders Association. “It’s ahead of schedule. It’s being built by all union trades and the architectural design is fabulous. We’re very happy with the way this is going.”

Most of the contractors working on the $1 million project are members of The Builders, Boak says. His company provided the metallic exterior, the roof and the insulation for the building. “Originally, we thought we’d be done by June or July. Instead, we’ll be done in about 45 days,” he says.

Initially, the plan was to completely renovate the existing building. However, once The Builders began to reconsider the value in overhauling a 40-year-old structure, it was decided it would be in the organization’s best interest to construct a new building with all of the modern amenities.

“We thought we’d do something that represents our work in the region,” Boak says. “The best way to do that is to build this type of facility.”

The new building sits much closer to Youngstown Kingsville Road, or state Route 193. This was done intentionally to display the quality of work and craftsmanship that tradesmen and contractors possess across the Mahoning and Shenango valleys, says Bruce Sekanick, a principal at Axiom Architects Inc.

Axiom is a venture formed by three local architecture firms – Phillips Sekanick Architects Inc. in Warren, BSHM Architects in Youngstown and Strollo Architects of Youngstown – that pools expertise from the three companies on select projects.

“Our concept was to provide something that was open and could be adapted to their use,” Sekanick says. The structure is designed to bring in as much natural light as possible, while striking a much more modern look than the older building.

“The old building was limited,” Sekanick says. “It was a fixed plan that didn’t give a lot of flexibility.”

The new plan went through “dozens and dozens” of different designs until consensus was reached. “At one point, we had between eight and 10 architects working on this process, whether it was site design, work on different parts of the building or just doing peer review of what was already developed,” Sekanick says.

About 20 tradesmen were on site Feb. 14 performing exterior and interior work on the 4,500-square-foot building. The dominant feature of the structure is an enclosed glass portico at the center, flanked by large windowpanes on the east side of the structure and smaller windows on the west end.

“We want people to not only look outward, but also inward,” Sekanick says. “We want it to be transparent.”

Yet what makes this project stand out is that a sizable amount of the material and labor costs have been donated by suppliers and subcontractors who are members of The Builders Association, Sekanick says. 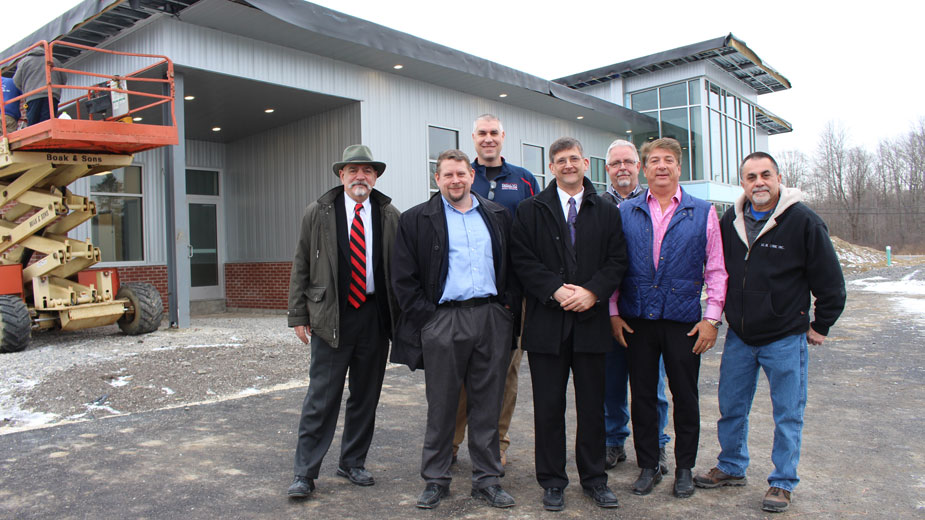 Among members of the Builders Association who are leading the construction of the new $1 million headquarters are Gregg Strollo, Pat Lankey, Joe DeSalvo, Bruce Sekanick, Jeff Mason, Sam Boak and Jerry Zreliak.

“We have members donating labor or supplies toward the project, while others have made financial contributions,” he says. “It’s valuable for them because it displays their work.”

For example, Joe DeSalvo, president of DeSalvo Construction in Liberty Township and the general contractor on the project, says Diamond Steel in North Lima and Connell Steel in Youngstown performed all of the steel erection at the site at no charge.

“That was probably the most significant in terms of cost and time,” DeSalvo says.

Boak says that even members who are not working on the project have stepped up and contributed in other ways. “The membership has been so kind and the outreach has been overwhelming,” he says.

As an example, Boak points out that the original budget did not include landscaping costs. “Our members would call up and donate to cover some of these costs because they want to be a part of this project in some way.”

The Builders Association represents more than 150 building contractors in Mahoning, Columbiana and Trumbull counties in Ohio and Mercer and Lawrence counties in western Pennsylvania. These contractors employ craftsmen in all 15 of the local skilled building trades.

In some cases, this project presented more of a challenge because it demands the best from the best in the Mahoning and Shenango valleys, DeSalvo notes.

“This is a project for our peers,” DeSalvo says. “It had the potential of being a challenge because there are a lot of others involved making sure we do everything we’re supposed to do.”

About 25 subcontractors contributed to the project, DeSalvo says. “Almost every single one of them is a member of The Builders Association,” he says.

And other suppliers that were not members but were involved in the project have joined the organization since. “We’ve grown our membership since the project has begun.”

DeSalvo says it’s routine to work with subcontractors and suppliers who are members of The Builders, so in many ways this project was not much different than most. “All of our projects are at least in part or in whole done with members of the Builders Association,” he says.

The contractor emphasizes that despite the difficult weather conditions experienced this winter, progress has been steady since it broke ground on Oct. 31. DeSalvo expects the entire project should be finished by April.

Pictured: The new building sits closer to the road to display the quality of work that tradesmen and contractors possess across the Mahoning and Shenango valleys.

YOUNGSTOWN, Ohio – Buoyed by $500,000 in funding from the Ohio Department of Development and BroadbandOhio, the Eastgate Regional Council of Governments announced Wednesday the start of the engineering phase for the Lake-to-River Fiber Line project along the state Route…