No Bricks and Mortar ‘Apocalypse’ for Retail

Cafaro, who is third-generation co-president of the Cafaro Co. with his brother, William, has been attending the convention since he was 13 years old. He expects someone will bring up the so-called retail apocalypse, which he calls “a fallacy.

“I don’t necessarily subscribe to the idea that this is an apocalypse,” says Cafaro, the Niles-based retail developer. “I think it’s certainly a correction – a long overdue correction.”

Markets that should have “changed and evolved away from retail” are feeling the effects of that correction, he says, adding that evolving demographics and changes in population will determine what type of retailers exist in communities as well as how many.

“There will be fewer selections going forward as a total community,” he says. “But what you’ve also seen in the past 20 years is that retail is becoming more concentrated” and smaller neighborhood shopping centers are becoming fewer.

Yet, as big box retailers such as Kmart and Sears shutter stores across the United States, Cafaro attributes it more to the evolution of the industry than the effect of e-commerce.

Five years ago, the industry “was terrified and didn’t know how to respond to the threat of e-commerce,” he says. “Today, it’s different. Retailers are understanding that the bricks-and-mortar presence is complementary to what they’re doing with their e-commerce channels.”

Data compiled by the International Council of Shopping Centers, the organization that hosts RECon every year – show that nonstore retailers made up two-thirds of e-commerce sales fulfilled directly from a warehouse. However, the share of retailers with physical stores, or omni-channel retailers, increases to 42% of all e-commerce sales when accounting for online sales fulfilled from in-store inventory.

That’s more cost-efficient for retailers because they can ship to a store rather than a customer’s house. It’s an advantage that retailers realize they have over nonstore retailers, Cafaro says.

“Amazon still has to figure out a way to make sense of shipping all these products and then offering free returns to multiple different distribution points – every single person’s home,” he says. “And still do that at less cost than if they were sending it all to a single retail store.”

Cafaro compares e-commerce to the past introductions of big box retailers and catalogs, which led to the same conversations about how malls would close as a result. “In their heyday, catalog sales were 11% to 12% of sales,” he says. “E-commerce is not even at what catalogs were … and bricks-and-mortar still survived.”

In a March report, the global trade association for the shopping center industry found that 90% of retail sales are still made at bricks-and-mortar stores.

If anything, e-commerce has lead to the closing of vulnerable chains, says Gary Hinkson, city manager for Hermitage, Pennsylvania. In February, Shenango Valley Mall owner JSMN Shenango Valley Mall LLC of Paramus, New Jersey, defaulted on its loan, forcing the mall into receivership. This came after the closing of Sears and Macy’s stores there in March 2017. However, there is “pretty steady amount of foot traffic to the stores that remain there,” Hinkson says.

“It’s more of a reflection of the financial status of those companies more so than the Shenango Valley Mall or the economy of our region,” he says.

“Restaurants are doing very well” in the city, adds assistant city manager Gary Gulla. The city is redeveloping the former Jess’s Restaurant site on East State Street for Toss’d. In the next month, it will start construction of a Popeye’s Louisiana Kitchen.

Increasing sales make restaurants one of the most sought after tenants in the mall after entertainment, notes Cafaro. Anchor restaurants at the Eastwood Mall Complex, such as Firebirds Wood Fired Grill, Texas Roadhouse and Mizu “are typically doing multiples of what some of the traditional retailers are doing,” he says. And because diners tend to frequent restaurants more than shoppers go to stores, “It brings more people out here and it gives them the opportunity to shop at other businesses while they’re here,” he says.

Cafaro attributes the trend to shoppers wanting more than just a place to go buy something. The social interaction “is just as important, if not more so,” he says, than buying the product.

In the April “Shopping Centers Becoming Consumer Centers,” the International Council of Shopping Centers reports 79% of U.S. adults patronized food and beverage establishments at shopping centers in the first quarter and that 64% went to a leisure-entertainment venue there. Since 2012, space for nonretail tenants has increased 3.9% to 23.1% of total gross leasable area, the report shows.

“If every developer had an opportunity to have a minor league baseball stadium, or some type of sport facility as part of their mall complex, they would sign up tomorrow,” he says.

Maintaining foot traffic is vital to acquiring prospective tenants, Cafaro continues. During the 2017 holiday shopping season, the mall saw a year-over-year sales increase of 3% to 5%.

Investment from the landlords and developers is just as important, he adds. At Eastwood, Target is undergoing a multi-million-dollar renovation and Cafaro anticipates the Eastwood Event Centre to open next spring.

Other recent investments include new carpeting, LED lighting fixtures, facade upgrades and an LED message board at the entrance of the food court, which “changes the perception of the entire front of the shopping center,” he says. Such investments are important to keep the center looking fresh and modern, he says.

“When your kids are going through the mall, they don’t want to be at the same mall that their parents shopped at,” he says.

The vacancy rate for the entire 3.5-million-square-foot complex is less than 5%, he says. 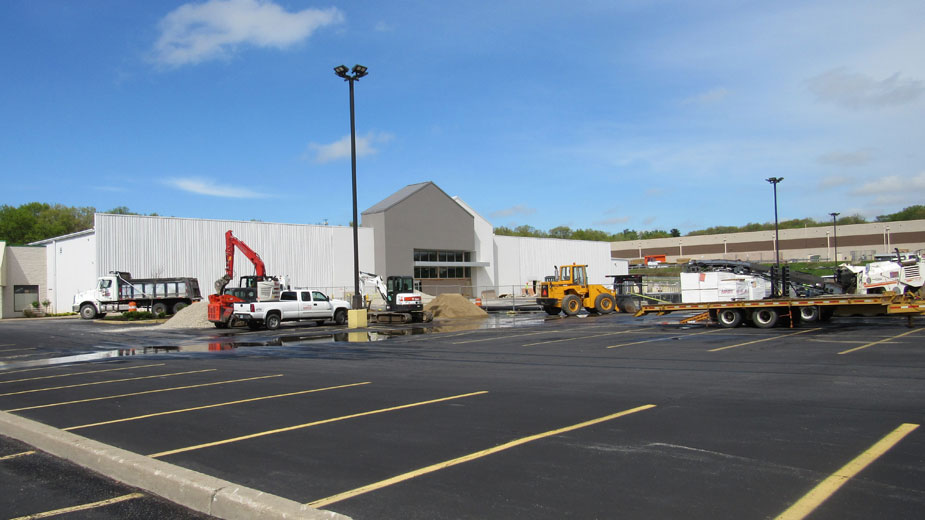 At Home is moving into an 80,000-square-foot space being constructed at Eastwood Mall Complex.

In Hermitage, the city is undertaking an update to its comprehensive plan called Hermitage 2030 that will establish a roadmap for the next 15 to 20 years, Hinkson says. Marcia Hirschmann, the city director of planning and development, is working on the plan with Pittsburgh-based Mackin Engineering Co. and its lead senior planner, Amy Lynn Wiles.

The plan looks at everything, including economic development, commercial/residential development, recreation, zoning and land use, Hinkson says. During a focus group in May, the most common need identified by residents was a more walkable community with a definable town center and denser commercial development. Part of the plan includes a market study to identify industries and businesses that will be well supported by the region.

“We’re excited about getting that plan completed and we’re just in the first one-third of the process,” he says. “We’re getting a lot of public input. We hope by the end of the year, or shortly into 2019, having that document finished.”

by ASCEND Youngstown - 11 minutes ago