WARREN, Ohio — Tucked away behind the dilapidated carcass of the once-sprawling Copperweld Steel Co. sits a bright, blue building that hums with activity and opportunity. The juxtaposition couldn’t be any starker.

Gone are the days when this complex along Mahoning Avenue in Champion Township employed thousands. Yet during its waning days in 1988, Copperweld entered into a partnership with Japanese manufacturer Daido Steel and formed a new venture – Ohio Star Forge – a business that initially was limited to the production of bearings mostly for the automotive industry.

“The nucleus of the company was two machines and the bearing business,” says William Orbach, president and CEO of Ohio Star Forge.

The successor of Copperweld, CSC Ltd., closed its doors and liquidated 16 years ago, while a more recent attempt to resurrect steelmaking at the site under Warren Steel Holdings also fell short. But over the last 30 years, Ohio Star Forge, now a wholly owned subsidy of Daido, continues to thrive and expand its plant at the site, a result of continued investment and diversification in its manufacturing processes and product line.

“A decision was made to grow,” says Orbach, who reports about $40 million has been invested into the operation since it started.

Still, the company had to take a closer look at its business model and recognize where its inefficiencies lay and opportunities exist. That meant diversification into other markets and developing the capability to forge components for automotive applications such as transmission systems, and enter into nonautomotive markets such as the oil and gas industry. 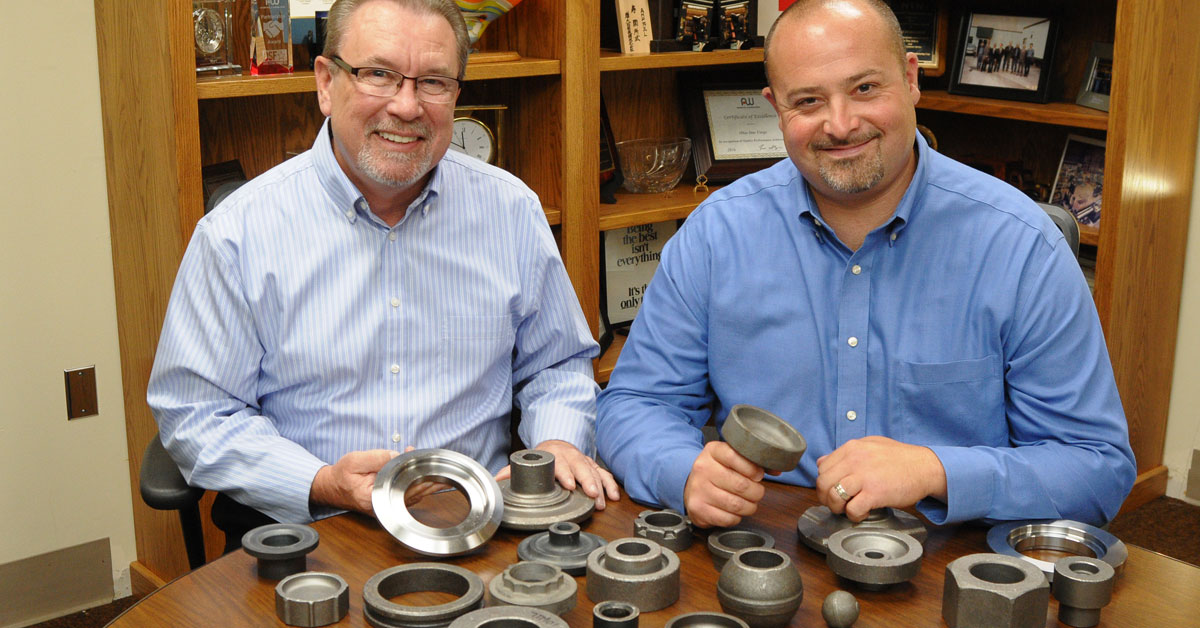 “Along with that, we’ve had to assess our competition and how they are competing in the global market,” Orbach says. “We were behind the curve before we realized that we needed to add more value to the product we had.”

This scrutiny last year led the company to plot out an entirely new course of action and add 15,000 square feet to its existing building to house a new machining division. “We went to Daido, requested a review market study and then the addition of the equipment to do the machining,” Orbach says.

He emphasizes that over the last 10 years, customers of Ohio Star Forge were asking for value added machining services to help them better source finished components. Moreover, the company’s competition was starting to enter this market, and Ohio Star Forge had to strike while the market was still hot.

“We designed this building so the wall can be knocked out,” Orbach says as he enters a brightly lit building with two lines of CNC machining equipment. An additional five machining cells are planned for the building, the first of which should be installed next year.

“Customers are not interested in managing supply chains,” says Tim Lambert, CNC machining manager. “They want a one-stop shop – one supplier that can offer a machined part.”

The expansion meant that Ohio Star Forge could attract new customers – most of which are Tier 1 suppliers to the automotive industry.

The new machining operation was funded by a $4.5 million investment by the company and enables Ohio Star Forge to further process the products manufactured by its forging division.

Essentially, the machining process refines the components produced by the forging lines, turning a rough metallic part into a smooth, gleaming and nicely finished product that can be shipped to the customer, Lambert says. The customer then will perform some additional work – grinding, for example – and “super finish” the part before it is assembled into a bearing system or drive train.

“From a strategic standpoint, this might be our most important expansion,” Lambert says. “This is what has helped open the doors.”

Orbach, the CEO, says should business increase at the projected pace, future plans call for the construction of two similar-size buildings to the west that could house another 10 or 11 machining cells.

Carl Paglia, director of sales and business development, says about 80% of business is tied to the automotive industry. About half of that business is devoted to bearing production and the other half consists of manufacturing parts for transmissions. “We also have a growing non-automotive and industrial sector – especially oil and gas,” he says. “You’re seeing it across the country.”

Where Ohio Star Forge has an edge over its competitors is the speed in which it can produce these parts, Paglia says. The workhorse of the production line is the Hatebur forge – a horizontal forge that’s able to produce components at a rapid clip. The company has discovered a method to manufacture parts that are traditionally made on slower vertical forges and convert the process to a horizontal forge – allowing for much faster output. “If you can take a more difficult product using a Hatebur forge, it gives us a competitive advantage. That’s what we’ve been able to do on a number of these parts.” 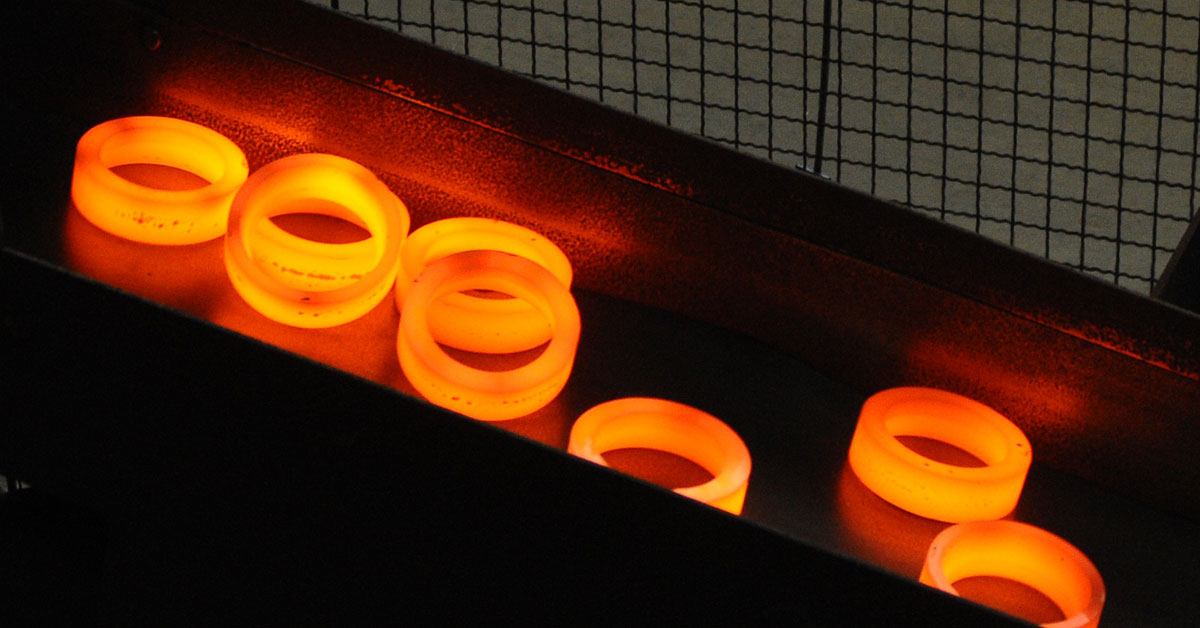 Simplified, forging is a manufacturing process that uses pressure and heat to produce a part. Bar steel is shipped to Ohio Star Forge where it is heated and fed into the forging systems, where the metal is shaped and cut.

Orbach points out that its larger, 1,500-ton Hatebur forge can run between 60 and 80 revolutions per minute, meaning it produces a part just about every second. “On smaller machines, we can go between 120 and 140 pieces per minute – or two pieces per second,” he says. “They’re coming off at an accelerated rate, meaning our throughput is much higher than the standard vertical, which gives us an advantage.”

Ohio Star Forge primarily supplies the North American market – including Canada and Mexico – Orbach says. Although business is strong, there are uncertainties presented by the growing trade rift as a result of steel tariffs imposed by the Trump administration.

In June, a 25% tariff was imposed on steel imported from the Far East, Canada and Mexico, and the European Union. This has led to rising material costs for the company.

“Tariffs are causing some angst,” Paglia says. Not only do these duties add costs that eventually are passed on to the customer, it hampers the ability to lock in new business, since it’s easier for a customer to find another bearing source not impacted by tariffs. “That’s what really costs jobs. We lose business as a result,” he says. “You can move a forging source. But it’s much more difficult to move a steel source.”

Ohio Star Forge processes roughly 40,000 tons of steel each year. On a warm August day, the plant is teeming with action as glowing hot bearing components spill one after the other off a Hatebur forge and into a bin.

“We get one shot at making a part,” Orbach relates. “If we don’t make it right the first time, we have to resupply the material. And we can’t get what we need today, let alone other orders because domestic steel companies are so strapped.”

Ohio Star Forge employs 120, mostly in skilled positions, notes Denise Villanueva, human resources manager. “There’s a lot of longevity here and our workers are highly skilled,” she says. “We hired five in July and that’s a big number for us.”

Orbach reflects that the company has borne the same trials as other metals manufacturing ventures across the Mahoning Valley over the last 30 years. But it has endured because of wise management and dedication by its employees.

“We’re very proud of the expansions we’ve gone through,” Orbach says. “Over the years, our parent company has invested more than $40 million into this facility. It’s a huge number and they have faith in what we’re doing here.”