On The Road to EVs with the Hummer

Second in a series
YOUNGSTOWN, Ohio – The new GMC Hummer EV, in Derek Snyder’s words, is both “iconic” and “ironic.”

Iconic in the sense that the Hummer, initially based on the military Humvee transport, created a sensation when General Motors acquired the brand during the late 1990s and distributed it until it was discontinued in 2010.

The irony is that this new vehicle – completely electric, redesigned and outfitted with the most sophisticated technology – won’t sip a single drop of fuel, whereas its predecessor was notorious as a gas-guzzler.

“This one is completely electric,” says Snyder, executive manager and partner of Sweeney Buick GMC.  “It’s the polar opposite.”

The Hummer EV – sold as a “supertruck” pickup and a sport-utility vehicle – is the first of GM’s next generation EVs that uses its Ultium battery platform. The pickup version began commercial production in December at GM’s Factory Zero in Detroit and is attracting much attention. To date, the automaker has received more than 65,000 reservations for the luxury truck version and SUV. The SUV model isn’t expected to arrive until 2023.

“It’s a perfect vehicle and it’s a beast,” Snyder says of the pickup. By June, Sweeney Buick GMC is scheduled to have three Hummer EV trucks on the lot, the first of 44 reservations the dealership has booked so far.

“We’re very fortunate to be on the front of this on the first wave,” Snyder says. “We’re leading the charge and it’s a great place to be.”

Snyder says customers loved the rugged aesthetics and elegant interiors of the original Hummer. The new EV boasts all of these features. Its 3X version, for example, is also enhanced with the capability of traveling 320 miles on a single electric charge, 1,000 horsepower, and 11,500 pounds of torque.

With a sticker price of more than $100,000, the Hummer EV isn’t a vehicle for everyone, Snyder says. It is, however, the perfect declaration vehicle that demonstrates GM’s innovation, creativity and capabilities in the EV space, he says.

Among the features of the Hummer EV is a four-wheel steering system that enables the vehicle to essentially “crab walk” diagonally, Snyder says.

A more practical feature for drivers, however, is the vehicle’s super cruise amenity – a hands-free driving system that he says is revolutionary in the industry.

The option uses LiDAR technology – a laser able to determine distances between vehicles and shapes of objects along compatible roadways. All the driver need do is press the super cruise function and the vehicle can gauge whether the car in front is slowing down, changing lanes, or merging into a lane safely, he says.

“This is about making that splash,” Snyder says. Once customers see or test-drive a Hummer EV, they could very likely become open to owning an electric-vehicle of their own as more affordable EV models are introduced over the coming years. “That’s what it’s about. We’re kind of paving the way.”

Indeed, the arrival of the Hummer unlocks an entirely new marketing strategy when compared to more conventional vehicles, Snyder says. “It’s more of a funnel approach rather than a retail strategy,” he says. “We’re getting the word out at this point.”

Electric-vehicle adoption is in its infancy and a good segment of the buying public has more questions than answers related to the EV market. For dealerships like Sweeney, this means ensuring its sales force and technicians are fully aware in their knowledge of products such as the Hummer – a vehicle like no other on the market today.

GM, he adds, has provided extensive online education and has contracted with a third-party firm whose representatives conduct education and training sessions in person at the dealership. “They go over features and benefits, competitive comparisons, and get us acclimated about real world questions that customers have,” he says.

These issues often involve concerns about range anxiety – the fear of running out of battery power when the driver isn’t near a charging station – or, outfitting a home with features to recharge the battery.

The dealership is also working to educate consumers on new features of EVs, including providing the services of a delivery coordinator to help customers become acclimated to the vehicle at the time of purchase.

“Coordinators are working with our trainers to customize this for an EV delivery where we focus on technology and connectivity,” Snyder says.

Robert Schoenberger, editor-in-chief of Industry Week, has covered the auto industry for more than 20 years. Schoenberger says the Hummer EV is a perfect vehicle for GM to hit the ground running in what will surely be a highly competitive segment.

“It’s a car that will appeal to some people,” Schoenberger says. “It’s fun to talk about and has all sorts of creative capabilities.”

He describes the Hummer as a “shocking” vehicle based on its technical prowess and one that will surely grab attention. “It’ll be a talking point. It’s that cool, fun vehicle that GM has always been good at.”

Moreover, the Hummer EV is that type of halo product that lays all the cards on the table when it comes to design, architecture, battery technology, mobility, infotainment systems, and its interior look, Schoenberger says.

“I’ve loved what they’ve done with the Hummer,” he says. “It’s a statement from GM to show that they can do something really creative and different.”

A documentary GM produced that detailed the odyssey of the Hummer EV from concept to production shows the legacy automaker is determined to fast track its claim in the EV space.

Al Oppenheiser, chief engineer at Hummer, says in the video that the vision for the truck is twofold.  The first is to “create a vehicle that introduces the new zero-zero-zero strategy with GM,” he says. “Zero crashes, zero emissions and zero congestion.”

The second vision was to accomplish this within an aggressive timeline, Oppenheiser says. Normally, a new product would take about four years from start to finish, he says: “We were asked to do it in just over two.”

Top executives interviewed during the documentary see the development of the Hummer as leading the charge for the future of GM. “The team has changed the company forever,” GM President Mark Reuss says.

Adds GM Chairwoman and CEO Mary Barra, “This is a once in a generation transformation.”

Pictured: Derek Snyder, Sweeney executive manager and partner, displays a virtual tour of the inside of the new Hummer EV.

Editor’s Note: On the Road to EVs is a six-part case-study series on how the auto industry is transitioning to electric vehicles. The series focuses on General Motors and a single dealership, Sweeney Chevrolet Buick GMC in Boardman. Click HERE for Part One. While the series is underwritten by Sweeney, editorial content is controlled by The Business Journal. 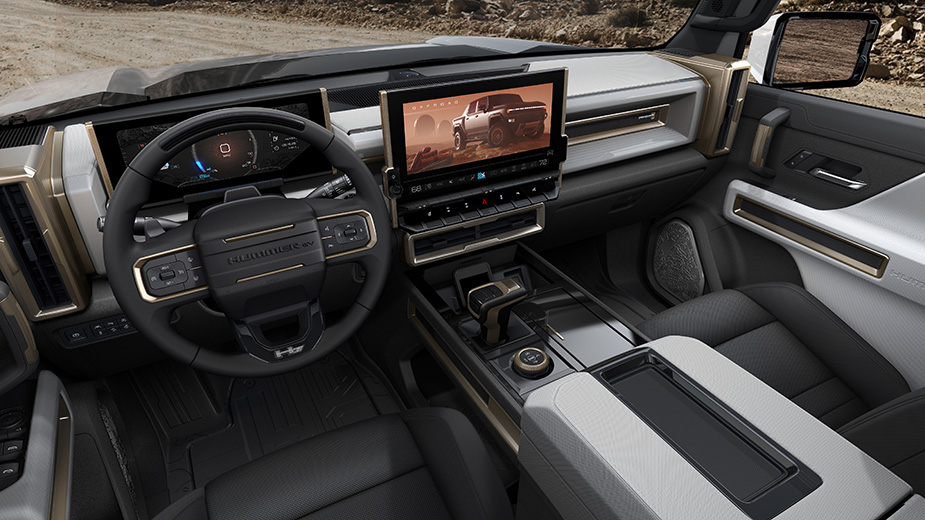 YOUNGSTOWN, Ohio – An hour-long documentary presented by General Motors Co. explores just what it takes for a major legacy automaker to shift gears into the future. The film, “Revolution: GMC Hummer EV,” chronicles the odyssey of the GMC Hummer… 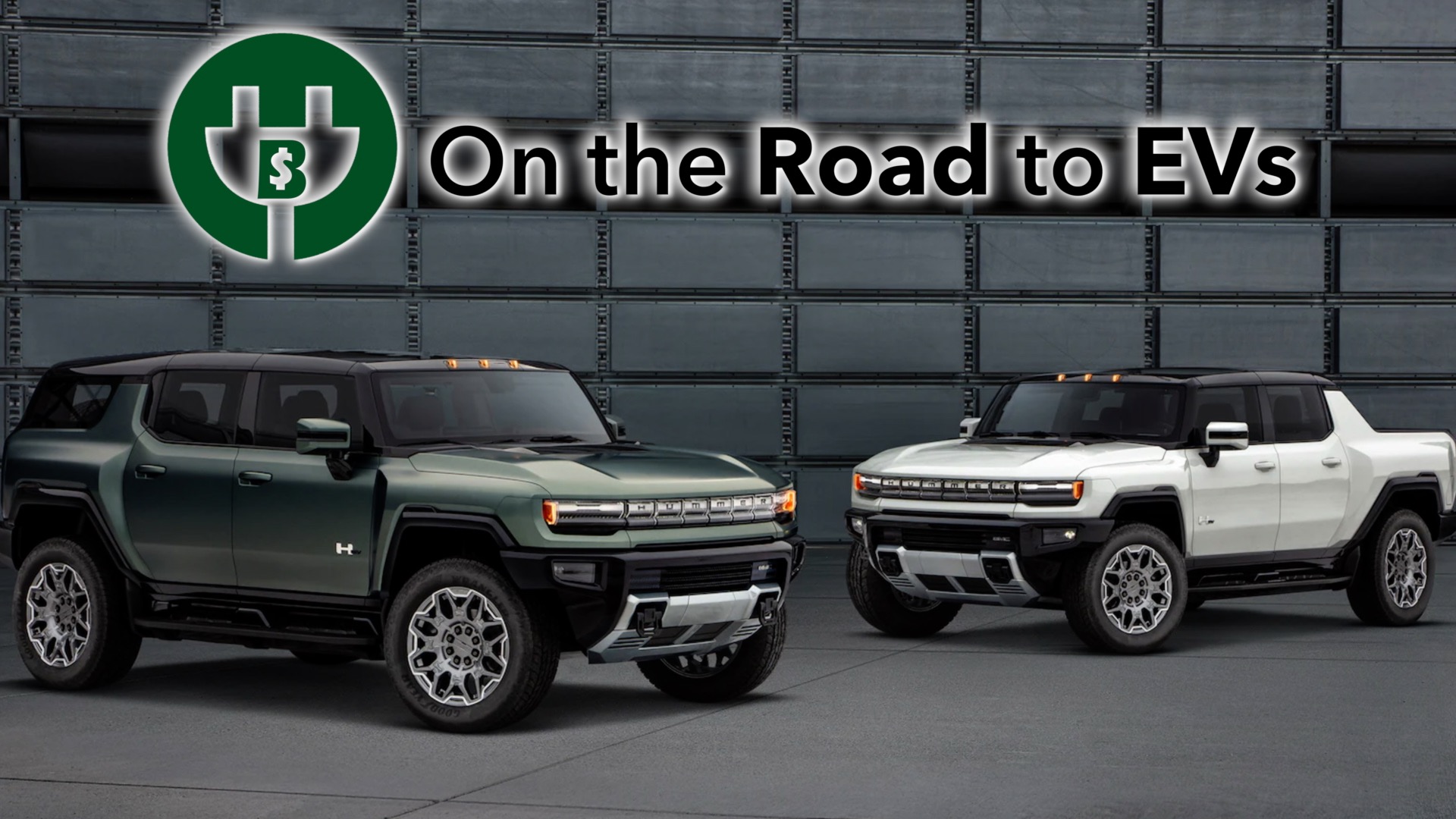 BOARDMAN, Ohio— The first GMC Hummer EVs are expected to arrive on the Sweeney Chevrolet Buick GMC lot next month. We take a look inside the EV anticipated to make a big splash. On The Road to EVs with the…