One-Room Schoolhouses Keep a Part of History Open to Explore

YOUNGSTOWN, Ohio – Once a year, Phyllis Jeswald files her second grade class into the Poland Little Red Schoolhouse. As the students arrive, they carry their lunches in pails and are dressed in clothing resembling what children wore in the 1800s.

During the school day, they’re versed on reading, writing and arithmetic. For recess they play hopscotch, jump rope and games with sticks found in the yard.

“Some of their favorite activities of the day are those activities that some seemed to have been forgotten,” says Jeswald, a second grade teacher at Poland Union Elementary. “We let them experience an old-fashioned school day.”

The students are on a field trip to learn what school was like in a one-room schoolhouse and to receive a history lesson on Poland Township.

“We work in McGuffey Readers and see if we can come up with the moral lesson that each story is trying to teach us,” Jeswald says. “They enjoy it.”

The books, developed by one-time Poland Seminary teacher William H. McGuffey, were first sold in 1836 and for decades were the national standard for teaching phonics, reading and writing.

One-room schoolhouses are rare today, as many fell into disrepair and were torn down. But the one-room schoolhouse in Lordstown on Salt Springs Road and the Poland Little Red Schoolhouse at Center and Struthers roads remain standing thanks to each community’s history societies.

The Poland Little Red Schoolhouse was built in 1858 and was one of six that existed in Poland Township. The schoolhouses ceased to function as schools in 1915. 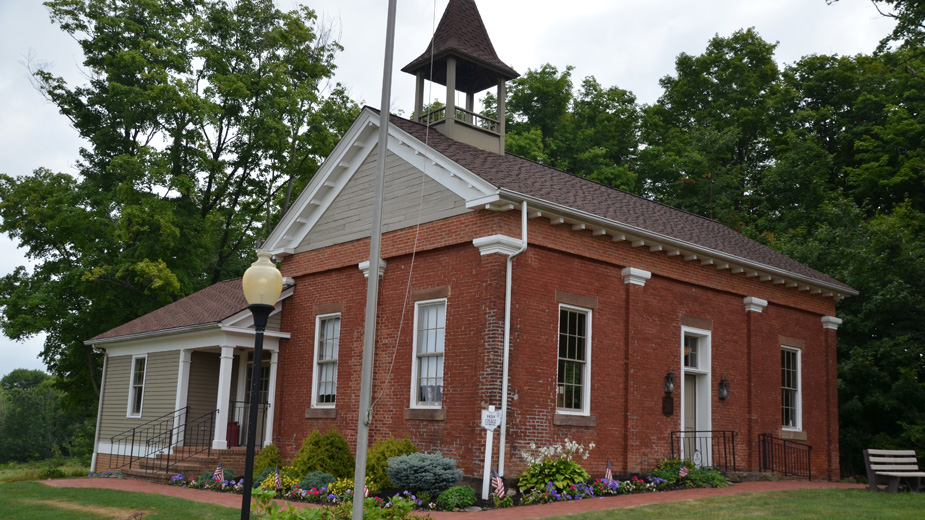 The Poland Board of Education has owned the building since then and over the years rented it out to various groups through the 1960s.

“The last group was an antique dealer that was renting it for $1 a year,” says Larry Baughman, president of the Poland Township Historical Society. “The building fell into disrepair because they weren’t keeping up with the maintenance of it.”

The Poland Township Historical Society was formed in 1979 by a group of citizens to restore the building. In 1983, the Board of Education and the history society entered into a 99-year lease at $1 a year.

“What you see here is the original brick building,” Baughman says. “This is part of one of the attractions here and it maintains the character of what Poland Township was like.”

Today the schoolhouse is a museum filled with artifacts from Poland. Aside from educational trips, the building is used for presentations and meetings held by the Poland Historical Society, which is chartered with maintaining the building and relies on donations for upkeep.

The room inside the red brick schoolhouse is about 22 feet by 32 feet. A hall is connected off of the schoolroom, where restrooms, a kitchen and a basement were added on during the restoration. The windows inside the schoolroom were restored in 2016.

Among the items in display  cases are the McGuffey Readers from the late 1800s, a photo of the students who attended the Little Red School House in 1904 and a handwritten speech and white dress worn by Margaret Barth Hill for her graduation in 1915.

In one of the glass cases are items donated by Anthony Baird Mitchell’s family.

Mitchell was a 1937 Poland Seminary High School graduate, where he set a record at a state championship track meet, Baughman says. After high school, Mitchell enlisted with the United States Army Air Force.

Baughman points to Mitchell’s World War II Purple Heart medal and a picture of the plane he was flying over Holland in 1944 before it was shot down. Today, the football field at Poland Middle School is named after Mitchell.

More recent items that the Historical Society collects are the Poland Seminary High School yearbooks dating back to 1949, all of which are donated.

Filing cabinets in the room are filled with folders on families who lived in Poland, including William McKinley, the 25th president of the United States.

“And we have something on the schools, cemeteries and churches as well,” Baughman says. “We’re entering all of our documents and photos into the computer so that we have a good summary of what we house here.”

The original bell remains on the roof of the schoolhouse and still works by pulling on the rope that hangs from it.

“When it was time to come to school, the teacher would ring the bell and that would let kids know to hurry up and get to school,” Baughman says.

When it was open, the school would take in children from first through eighth grades who lived within two miles. 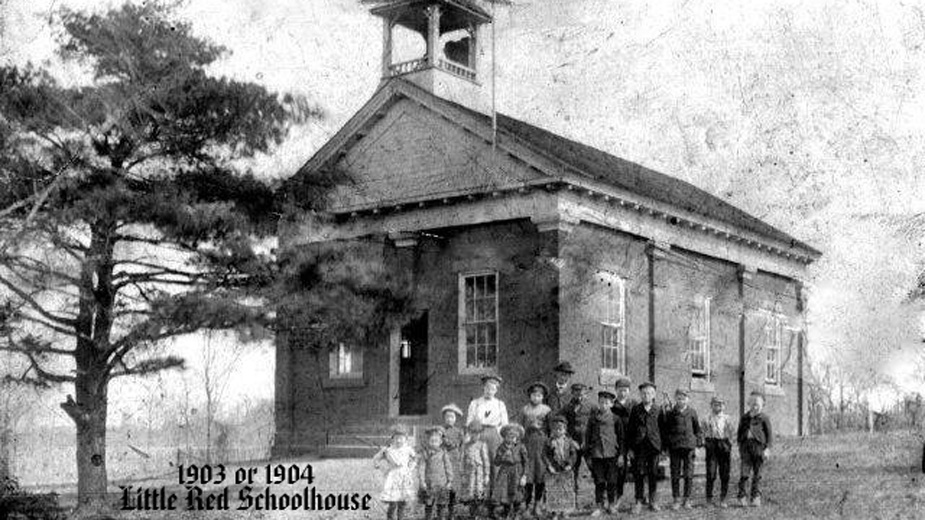 Pictured: Students stand in front of the Poland Little Red Schoolhouse in 1903.

“They would bring their own lunch and come to school on horse and buggy and some would walk,” Baughman says. “In cold weather it would be very difficult getting to school in deep snow.”

There were no indoor restrooms, so students had to use an outhouse and they would have to bring in water from the outside for everybody to drink.

“That was the kids’ chore,” Baughman says. “They would have to bring water in and everybody would drink out of the same dipper.”

A potbelly stove used for its heat sat in the middle of the schoolhouse and the children would have to carry the ashes outside to dispose of them.

The students were all taught by one teacher and primarily studied reading, writing and arithmetic, but also learned geography and history, Baughman says.

School days were similar for students who attended one-room schoolhouses in Lordstown from 1830 through 1916.

Dean Bailey, a member of the Lordstown Historical Society, walks around the one-room schoolhouse in Lordstown, next to the fire department, pointing to pictures and newspaper clippings that hang on the walls.

On one of the items is a 1945 class graduation picture from Lordstown High School. He points to where he is sitting in the picture.

“There were 12 girls and six boys in our graduating class,” Bailey says as he looks admiringly at his younger self. 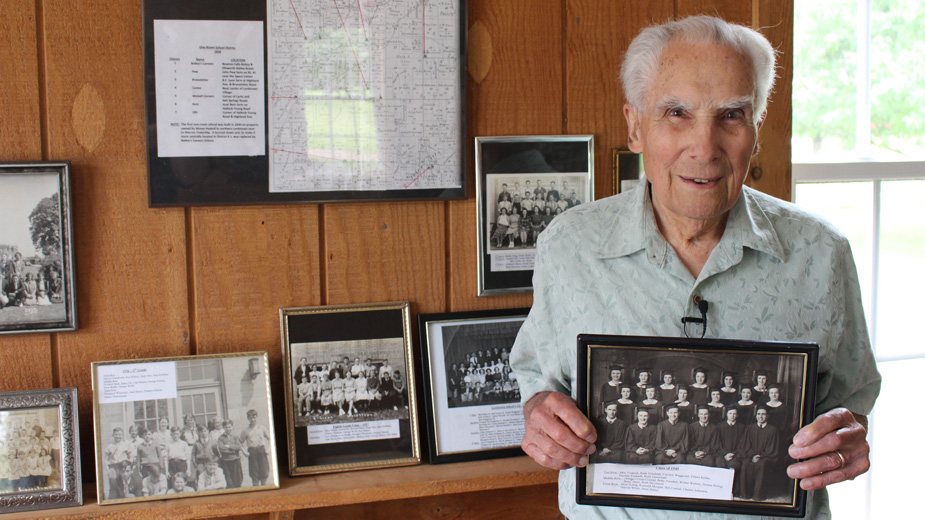 Bailey is the retired superintendent of Lordstown Schools and his family’s ties to the community go back to the 1800s.

Bailey points to a picture of a one-room schoolhouse. The schoolhouse’s name reads, “Bailey’s Corner.”

“Ellsworth-Bailey Road and the corner of Newton Falls-Bailey Road is where my ancestors settled here in 1828. Somebody in my family has always lived in Lordstown ever since.”

Bailey’s Corner was one of seven one-room schoolhouses that once existed in Lordstown.

Other items inside the Lordstown schoolhouse are clothing from the early 1900s and mail-sorting boxes from the Lordstown Post Office, which closed in 1900.

One of the biggest draws inside the schoolhouse is on a table near the front door, which has Lordstown High School yearbooks dating back to 1946.

“It shows you how times changed,” Bailey says.

“I graduated from Lordstown High School in 1945 and we didn’t have year books.”

The schoolhouse is owned by the village but is maintained by the Lords-town Historical Society. It still has its original floors and over the years its been used as a school, a home, a craft store and now a museum, Bailey says. 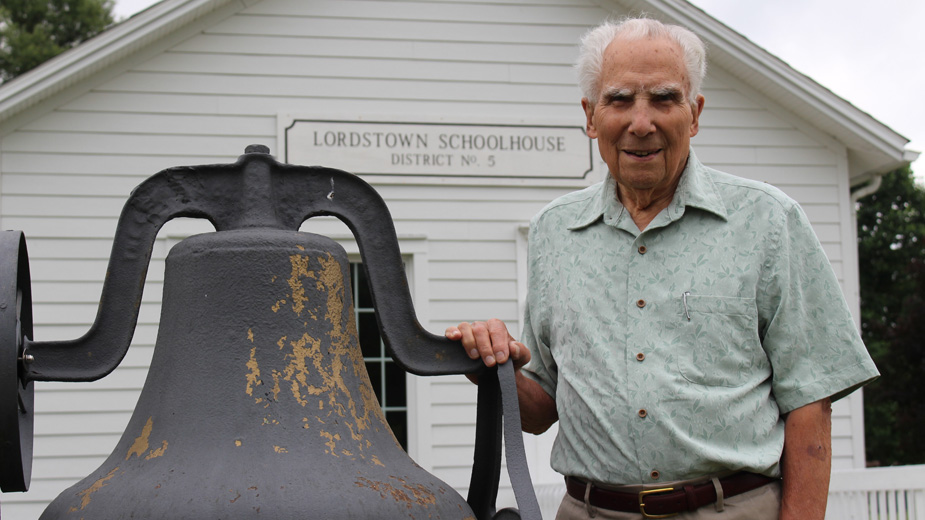 Pictured: Dean Bailey stands in front of the Lordstown Schoolhouse.

Recently, the schoolhouse hosted an open house along with Lordstown Schools to celebrate the centenary of the district’s first graduating class.

“A lot of people were surprised by the amount of history and memorabilia we have,” says Courtney Gibson, a teacher at Lordstown High School.

Gibson, a social studies teacher, has had some of her students participate in a summer program to help the Lordstown Historical Society organize the items in the schoolhouse.

“The kids come back and are fascinated by the pictures they see and the history they learned,” she says. “We’re lucky we have the historical society there to give us all this background about our town and they’re so knowledgeable about everything.”

Bailey hopes that as the members of the history society become older, the younger generations in Lordstown step in to keep the schoolhouse open.

“It’s important for people to know how their ancestors lived, what they lived in and what they did,” Bailey says. “And here we try to maintain all of that.”

Pictured: Among artifacts the Poland Township Historical Society has on display, says Larry Baughman, president, are pictures and paintings of the school.