Parties Mobilize for Final Push to Get Out the Vote

“We can’t let up,” he said. “As you have probably read in the paper, these races are all very close. Our commitment to you is to continue right up to the end.”

The GOP candidate for governor was joined by the party’s candidate for secretary of state, Frank LaRose; Ohio Supreme Court Justice Mary DeGenaro and several candidates in down ticket state and local races. He shared talking points with the party faithful coming and urged them to contrast his record as Ohio attorney general with that of DeWine’s Democratic opponent, Richard Cordray, who he defeated in 2010 for the post.

After becoming attorney general, DeWine said he cleared the state crime lab backlog of untested DNA kits, which sat for 125 days on average, and has tested nearly 14,000 rape kits, with matches on 36% of them, he said.

Based on plans Cordray has announced, the Democrat would add $4 billion in new state spending, an estimate he called conservative.

“There’s only one place for that money to come from – all of you,” he warned.

As the GOP candidate prepared to speak, representatives of the Ohio Democratic Party stood across Market Street and inflated a 13-foot-tall “Trump Chicken” balloon to call attention to what they say is DeWine’s unwillingness to confront President Donald Trump over his attacks on the Affordable Care Act. 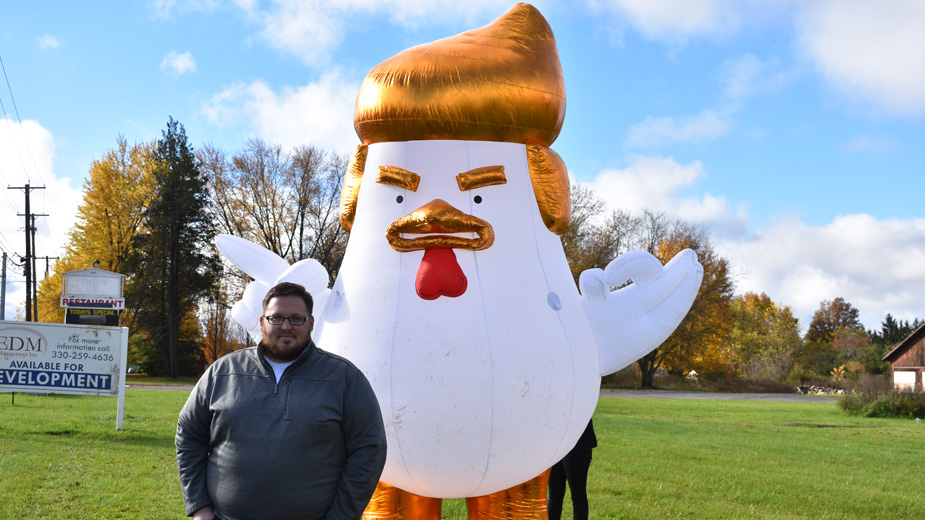 Chris Anderson, executive director of the Mahoning County Democratic Party, stands in front of the Trump chicken balloon, which was inflated across the street from GOP headquarters.

DeWine pushed back on claims that he opposed protections for people with pre-existing health conditions, one of the elements of the ACA. On his first day as attorney general, he joined a lawsuit opposing the health-care law.

“A lot of people didn’t like the Affordable Care Act” because of provisions such as the individual mandate and inability in some cases to choose a physician. But being against ACA “doesn’t mean you’re against coverage of preexisting conditions,” he said.

DeWine noted that he voted seven times to cover people with pre-existing conditions. Should federal law be changed so people aren’t protected, he would go to the state legislature “and we’ll fix that,” he said.

Cordray and U.S. Sen. Sherrod Brown will join state and local Democratic candidates Sunday for a Get Out the Vote rally at the Mahoning County Board of Elections. The event, part of a statewide bus tour, is scheduled to begin at 1:30 p.m.

Throughout the weekend, Ohio voters will hear about” the clear choice” they face on Tuesday, said Cordray spokesman Mike Gwin.

Cordray, former director of the federal Consumer Financial Protection Bureau, “has always stood on the side of working people and took on Wall Street and powerful lenders to put money back in the pockets of middle class families,” he said.

“DeWine has spent 42 years in politics doing the bidding of the powerful corporations who bankrolled his campaign and has backed them on every issue, from supporting bad trade deals like NAFTA … to suing to take away protections from the 4.8 million Ohioans with pre-existing conditions.”

“The timing of the visit is perfect,” David Betras, chairman of the Mahoning County Democratic Party, said in announcing the rally.

“The polls open for early voting at 1 p.m. on Sunday. We’re going to create a very festive atmosphere for the voters and the candidates,” he continued. “We’ll have a food truck and music so we can mix in some fun with the very serious business of electing the men and women who will lead Ohio over the next four years and beyond.”

The full-court press by both political parties and their candidates comes as voters show their enthusiasm with record high early-voting numbers for a midterm election, officials say.

“It’s been busy all day long,” reported Tom McCabe, deputy director of the Mahoning County Board of Elections.

To date, the county board has mailed 22,133 absentee ballots and processed 5,522 ballots cast at its offices. Four years ago, a total of 21,200 early votes were cast in the midterm general election.

This weekend, McCabe is anticipating about 1,500 ballots to be cast at the board offices.

“We could be looking at numbers pacing what we did in 2016, which was a presidential election year,” he said.

At the Columbiana County Board of Elections, director Adam Booth  reported steady activity. “The lobby has never been empty all day,” he said.

As of Friday afternoon, 7,226 early ballots has been mailed out or cast at the board offices, he said. Four years ago, 5,500 early votes were cast for the midterm election.

“I wouldn’t be shocked to see a few hundred people come through over the weekend,’ Booth remarked.

Based on the phone calls she has received, Stephanie Penrose, director of the Trumbull County Board of Elections, also is anticipating heavy turnout this weekend.

“In-office voting is kind of crazy,” Penrose said. “People have been lined out the door most of this week.” About 490 people voted in office Thursday, and Friday afternoon she anticipated surpassing that number.

“Since 2016, everything’s changed, primarily because of the enthusiasm for Donald Trump among Republicans,” observed Mark Munroe, chairman of the Mahoning County Republican Party. “The excitement and enthusiasm generated by the president has allowed us to do a much better job of recruiting and to find people willing to help – not just willing to help, but they’re anxious to get involved, and that’s been very gratifying.”

Mahoning County Republicans are focused on Election Day logistics, Munroe added. The party anticipates having enough volunteers to be placed at most of the county’s 70-some polling sites, he said.

“We’ve got drivers who are coming in who will be prepared on Tuesday to make deliveries or to take people to the polling places,” he said.

Democrats say they, too, will be busy this weekend and through Election Day.

“Everyone is going to be mobilized this weekend — knocking on doors, making phone calls,” said Robin Patterson, spokeswoman for the Ohio Democratic Party. “Our GOTV effort is really extensive.”

And both parties are bringing in celebrity firepower. Former Vice President Joe Biden, who rallied with Democrats Monday at Youngstown State University, will boost Democrats today at an event at Parma and performer John Legend will be in Cleveland tomorrow. Trump will headline a rally in Cleveland Monday.

Mahoning County Democrats will be mobilized in conjunction with the statewide effort to knock on doors and make calls, “making sure that we get the message out that there’s one party out there that has a blueprint to move Ohio forward in the right direction,” said Christopher Anderson, executive director of the Mahoning County Democratic Party.

Pictured at top: Mike DeWine rallies the Republican Party faithful Friday during a visit to the Mahoning County GOP headquarters in Boardman.