YOUNGSTOWN, Ohio – U.S. Sen. Rob Portman saw firsthand the results of a $4 million federal grant used to train individuals for welding careers and touted the results of the tax bill passed by Congress last year during a visit Wednesday.

The Republican senator toured the Flying High Inc. campus on the North Side, where he met with students in its welding and other training programs and participated in a roundtable, following a midday speech to the Rotary Club of Youngstown.

At Flying High, Portman visited its Professional Development Center Welding School, launched with assistance from a $4 million federal TechHire Partnership grant to provide training for high-demand careers with a focus on veterans and those with criminal records. He also toured Flying High’s Grow Urban Garden and Eagle’s Nest Recovery House.

“I can’t wait to go back to the Department of Labor folks and tell them what I saw here today,” Portman said. “We supported the program, figuring that you guys would do the right thing. It’s even more impressive than I thought.”

Such programs are needed in the community, said Guy Coviello, vice president for governmental affairs at the Youngstown/Warren Regional Chamber. The OhioMeansJobs website shows 13,000 job openings in the tri-county area, he noted.

“There are good jobs that are waiting for trained people to come and fill them,” he said.

Welding provides a pathway into “a lot of other job opportunities,” said Ron Fasano, director of development for the Professional Development Center.

The program also helps bridge the gap between drug treatment programs for those in recovery and the workforce. “Treatment by itself doesn’t work because there’s no connection to the workforce,” he said.

“It’s about being productive. It’s about having a purpose,” Magada said. “When you feel the energy that’s here in the welding school and in our other vocational programs, these guys are on a mission. They’re grateful for the opportunity. They’ll take every opportunity they can get and they’ll soak every ounce out of it.”

During the roundtable, Portman promoted legislation that would permit federal Pell Grants to pay for shorter-term training programs in fields such as welding and trucking. Portman introduced the Jumpstart Our Businesses By Supporting Students Act last year with U.S. Sen. Tim Kaine, D-Va.

“There’s a reason that we have such a skills gap in this country,” Portman said. “We have a lot of jobs that are open. We have a lot of people that are unemployed and that’s because they don’t have the skills that are needed. It’s usually a short-term program that’s going to be successful, not a couple of years.”

Another factor causing the gap in the number of people who are employable and ready to go to work is the opioid issue, Portman said.

“A lot of people are not going back to work unless we can deal with their addiction problem,” he said. “It’s all about chasing that high so we’ve got to deal with this issue.”

Earlier Wednesday, Portman addressed the opioid issue, tax reform and several other topics as Youngstown Rotary meeting, held at the YMCA of Youngstown Central Branch. He toured the downtown branch following the meeting. 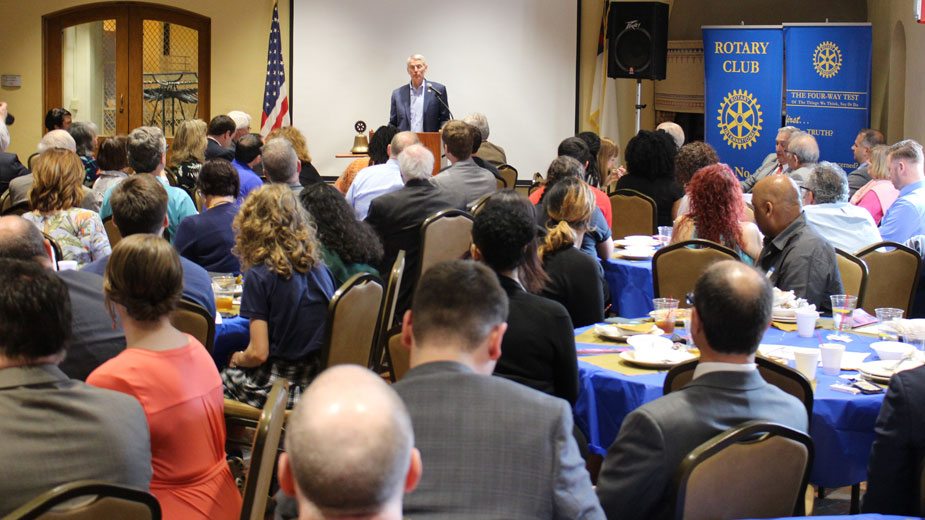 Following passage of the tax bill, Portman said, economic performance has improved around the country and in Ohio.

“Employment numbers are better. Wages are better,” he said. “The best thing that’s happening in terms of the economy is the relief that’s going to businesses, who are in turn investing in their companies.”

Because of the economic growth, he said, some employers are facing the challenge of finding qualified workers, including those with the training for the positions they need to fill. Some 145,000 positions in Ohio are open, he said.

The skills gap is one issue, but the opioid issue is another, Portman continued. He raised the issue at the Rotary meeting because members “have your finger on the pulse of what’s happening in this community,” he said.

“Getting the community together is really essential. We’ve got to figure out how to engage everybody,” he said.

Meeting with reporters following his speech, Portman said he spoke with General Motors CEO Mary Barra immediately after the announcement that the company planned to end the second shift at its Lordstown Complex, idling 1,500 workers.

GM cited the shift in the auto market for the decision, with consumers now preferring trucks and SUVs to smaller cars such as the Chevrolet Cruze, manufactured at the Lordstown plant. The senator urged Barra to consider bringing a new product to the plant, which the CEO said the company is looking at.

“That’s a terrific plant and the folks at Lordstown did all the right things, including taking some concessions during the bankruptcy,” Portman said.

Portman said his office has not had direct contact with TJX Companies Inc., which is considering Lordstown and other sites for a $160 million distribution center, but has been in discussions with Lordstown Mayor Arno Hill about the project.

“That could be a lot of jobs,” Portman said. “We want to do everything we can to try to be of help.”

Hill, who attended Wednesday’s Rotary meeting, said he has not heard anything new from the company since early in the week, but officials were aware of the rally held in the village Sunday afternoon.

“They said it was very impressive,” Hill said. “Whether that’s enough to bring them through or not, who knows?”

This month’s Impact Makers feature spotlights Flying High Inc. Read the story in the May edition of The Business Journal and watch the video on Friday’s DailyBUZZ.