YOUNGSTOWN, Ohio – At first, the sounds coming from each section of the Youngstown State University Marching Pride are incongruous. Each section is spread across the field – tubas on one side of the field, saxophones on the other, woodwinds in an end zone – each playing their own part of a song, working at their own pace and out of sync with each other.

But after about half an hour of practice spent fine-tuning the individual performances, the separate pieces come together and the music is instantly recognizable: “Smells Like Teen Spirit” by Nirvana.

“I don’t think any of you were born when we first heard grunge,” says Ward Miller, a guest clinician for the Marching Pride, as he walks them through practice. “All through the 80s, music wasn’t made by artists. It was made by executives to make as much money as possible. When grunge came along, it was so different from what we had been hearing. It was angry about what we had been given. If you don’t play this song angry, it doesn’t sound right.”

A section of horns may have replaced Kurt Cobain’s fuzzed out guitar, but the emotion is still there.

“Let’s try it again,” he shouts as the band snaps to attention.

The piece is part of one of the band’s halftime shows for the upcoming football season, A Salute to Dave Grohl. Later in the season, the band will debut a second show honoring the 150th anniversary of the Dana School of Music, welcoming faculty and alumni as guest performers.

For one week in August, the band is at a makeshift football field at Harrison Field in Smoky Hollow, practicing 12 hours a day to make sure every note, step and turn is perfect.

“It starts with entry-level things. Here’s how you move your feet. Here’s how you begin sounds,” says Brandt Payne, director of athletic bands at YSU. “Those serve as the building blocks for putting the show together and bringing the performance together with music.”

Each fall, the 100-plus members of the Marching Pride play at every Penguins home game, plus a road game if a FBS-level opponent is on the schedule. In recent years, the band has played at University of Pittsburgh, West Virginia University, Penn State University and Michigan State University.

But those performances start in the heat of mid-August, before students are back in class or even moved into the dorms, with practices running from 9 a.m. to dusk.

“We’re up early and go to bed late. We spend all day practicing, especially in the first week. It’s all that practice that makes us sound good,” says Thomas Turnbull, this year’s head drum major. 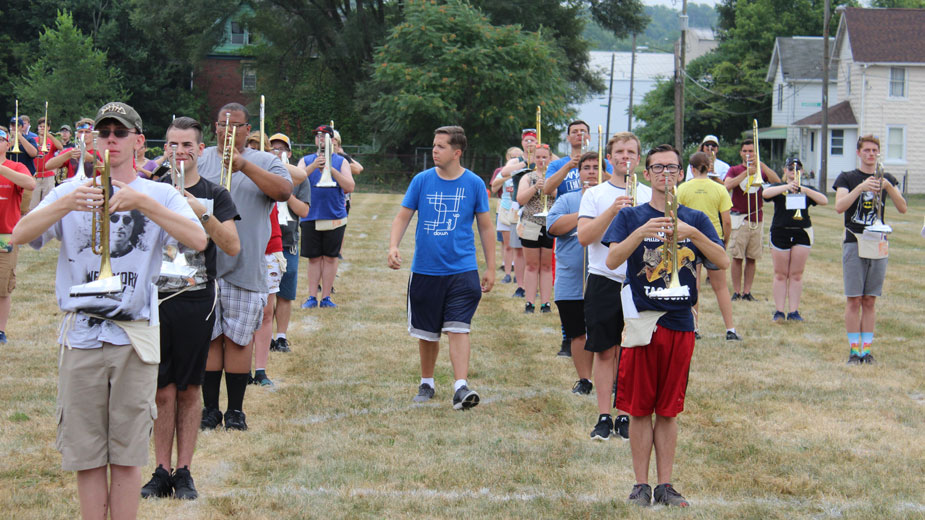 Turnbull, a senior at YSU majoring in music education, is in his fourth year with the Marching Pride and will spend the season atop an aluminum stand on the 50-yard line, helping keep the band in sync.

“Everyone looks to me, especially when there’s no drum line, to keep the tempo. Sometimes a glance can go a long way,” he says. “If you look at a section, they usually know what you need them to do. It’s all about vibing with them.”

In agreement with Payne, the drum major says it all comes down to practice. Whereas the football team has a month – and three weeks where student athletes don’t have to be in class – to get ready for its first game, the marching band has a seven-day rush to prepare before classes start, after which the band gets a few hours a week to practice.

“The pace at a college level is much quicker than what the freshmen are used to [from high school],” says Kathleen Brown, a senior at YSU and part of the field staff for the band. “We have a lot of music and music education students on our staff and Dr. Payne has taught us really well how to work with those freshmen so they can understand the process and be successful.” 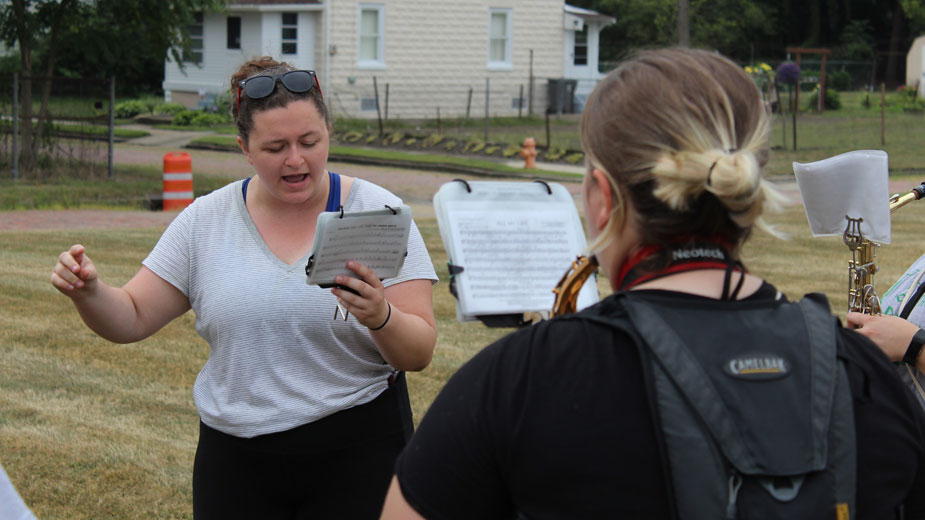 Getting musicians up to speed, both freshmen and upper-classmen, starts with fundamentals. Throughout the full-band practice, a metronome is almost constantly ticking away, keeping the beat while the drum line practices on the other side of campus. Everything is done in time with the metronome.

“Students’ feet are coordinated with the metronome to the point where every beat is a subdivision. You know where your ankles are supposed to align, where your feet cross, how your heel plants,” says Payne, who’s been at YSU 14 years. “It’s a very structured, organized way of walking.”

Off the field, Payne also spends the preseason camp developing the performances, both the musical arrangements and marching patterns, and making sure everything is ready to go, from uniforms to music licenses.

“Fidelity to copyright laws is very important to us. The music we’re playing comes from stock charts, prewritten arrangements that already have all the licenses taken care of,” he says.

As for uniforms, the current outfits were donated by the late Helen Stambaugh, a longtime supporter of the band, about a decade ago. Instruments, meanwhile, are a mix of ownership.

“Our drum line instruments, the tubas, brass instruments like the mellophone and baritone horn, we provide those,” Payne says. “And there are some instruments that we rent and some students have their own.”

It’s all part of the bigger picture of a performance and it’s where Miller, the guest clinician, enters the picture. The two were classmates in college and Miller comes to YSU occasionally to provide some coaching to the Marching Pride. Among his accomplishments are founding the marching band at University of South Alabama and creating arrangements for Ohio State University, Auburn University, University of Iowa and others, including YSU.

“How we execute musically, the energy and excitement, is all a constant, no matter where we are,” Payne says. “In addition to our pregame and halftime shows, there’s what we generate in terms of energy within the stadium. That’s a huge priority.”

That energy hasn’t gone unnoticed by those on the field while the band plays.

“My mom was in the band,” relates Vitas Hrynkiewicz, a center on the football team. “She said, ‘Vitas, whatever school you go to for football, they’ve got to have a great band.’ And there is a great band here. They get us fired up and they get the fans in the game.”