YOUNGSTOWN, Ohio – New vehicle buyers could be in for a case of sticker shock. Monthly payments are already at all-time highs. And as loan interest rates rise, the cost of purchasing a new vehicle will continue to climb, leading many to lease.

In the second quarter, monthly payments for loans and leases reached an average of $525 and $431, respectively, an increase of $20 and $19 year-over-year, as reported by Experian Information Solutions Inc. The average interest rate for a new vehicle purchase hit 5.76%, up 56 basis points from the second quarter of 2017.

For consumers who make low monthly payments a priority, these trends have made leasing an attractive option. While leasing dropped slightly in the second quarter, 30.41% of consumers are still financing new car purchases with leases, down from 30.83% the same period last year, according to Experian.

At Mark Thomas Ford in Cortland, leases make up about 45% of total new car sales, reports sales manager Steve Bott. The dealership is on track to sell about 400 new vehicles this year, which is on par with its annual average. Bott expects leasing to increase over the next few years as vehicle costs continue to increase, he says.

“Costs are going to go up every year. The cost of living and things go up, and that’s why we do leases,” Bott says. “The wages of a person buying the car, sometimes they haven’t gone up as much as the car prices.”

Those differences helped increase lease sales volume for seven consecutive years before reaching a record high of 4.3 million units in 2016 and tapering off, Edmunds reports. In Ohio, leases accounted for 40% of new vehicle sales in 2016, a 62% increase from 2011.

“This is a heavy lease market. It’s how this market has been for a long time,” says Matt Taylor, owner of Drive Taylor, which includes Taylor Kia in Boardman as well as Taylor Toyota and Taylor Chevy in Hermitage, Pa. Sales at the Kia dealership are split evenly between lease and finance, he says.

“Years ago, area dealerships pushed lease for better or for worse. The market’s accustomed to leasing cars,” Taylor says. “If you go to other markets, lease percentages may be 20% because people aren’t as accustomed to it or it’s disincentivized for some reason,” such as taxes or state or local laws.

In 2016, leasing gave millennials a path to new car ownership, with that segment accounting for 32% of all leases that year, Edmunds reports – the largest share of leases among all other age groups. It also bolstered pickup truck and SUV sales, the latter of which outpaced passenger cars for the first time.

That trend continued into 2018 as passenger car sales continue to slip, down 20.7% year-over-year in September, while sales of light trucks – including pickups and SUVs – increased 2.4%. It’s inspired Ford Motor Co. to eliminate many of its passenger car lines to focus on light trucks and SUVs. After the 2019 model year, Ford will no longer make the Fiesta or Taurus. The Focus was cut this year.

Of all new vehicle sales at Mark Thomas, 75% are trucks, Bott notes. Escape and EcoSport SUVs are increasingly popular and the F-150 continues to sell well, he says. He attributes that to market conditions and higher interest rates, “and I think that’s why some of the cars are going away,” he says.

As passenger cars leave the lot – exceptions being the Mustang and Fusion hybrid – the forthcoming Bronco off-road SUV will take their place to compete with the Jeep Wrangler, Bott says. The original Bronco line ran from 1966 to 1996.

In the case of light trucks, consumers don’t seem swayed by the cost. Through September, the average transaction price for a full-size pickup was $48,377, up 48% from 2008, according to Edmunds. Some full-size pickups can cost more than $100,000.

Bott expects dealers to rely on both leases and financing incentives to keep selling the more expensive vehicles. It becomes difficult to lease a new vehicle toward the end of the model year, so dealerships find other ways to move the inventory.

Despite average used-car monthly payments reaching record highs of $378 – a $13 year-over-year increase, according to Experian – sales are up. Cox Automotive, the Atlanta-based owner of Kelley Blue Book and Autotrader.com, reports used car sales increased 3% in July, particularly among compact and midsize cars.

“There’s always a market, there’s always a niche,” Bott says. “But that’s created by some of the leases. You can’t have one without the other. If we don’t have the new car side, we don’t create used cars.” 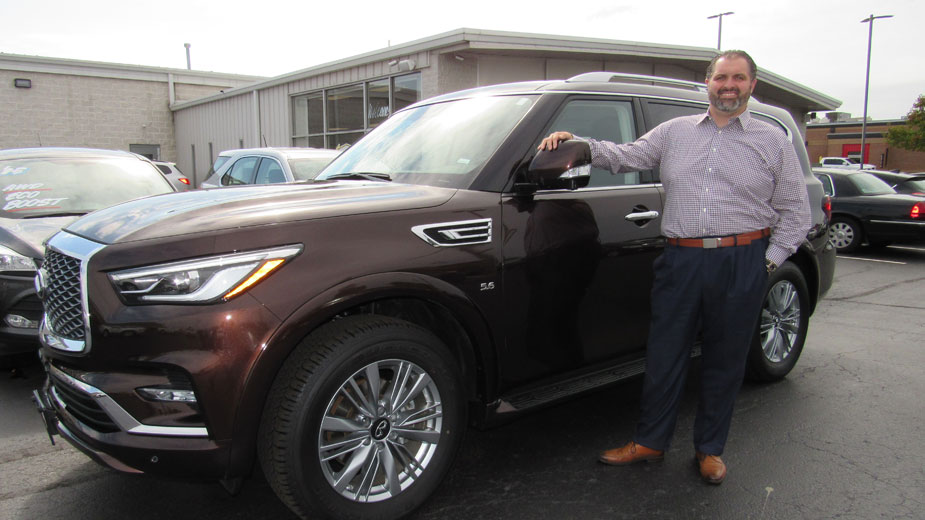 Pictured: SUVs like the Infiniti QX80 sell well at Haus Auto, Chris Haus says. In 2017, sales were up 20% at the used-vehicle dealership.

Haus typically stocks vehicles that aren’t leased and will offer vehicles with “a more attractive payment” to avoid competing with lease prices, he says. Prices range from $5,000 to $55,000. The last few years have been good for independent dealers, he says. As interest rates climb, “People will look for cheaper ways to finance,” he says.

Earlier this month, the Federal Reserve lifted the benchmark interest rate a quarter-point to a range of 2% to 2.25%. It was the third increase this year and it’s expected to increase again in 2019. Reports indicate that federal officials expect the rate to settle between 2.75 and 3% next year.

“Everybody has a budget in mind,” Haus says. “Sometimes on a new car you can’t hit that budget.”

Haus stocks his inventory with “60 different models of cars and 25 different makes” to tailor to each customer, he says, with SUVs selling better than passenger cars. His ideal inventory turnover is 40 days “so we can keep up with the market shift pricing,” he says.

“When we do our stocking, I want five of what we sell and one of everything else,” he says. “If we don’t have a car the customer wants, we’ll search for the specific make, model, color and interior.”

Pictured: After 2019, Ford will cease production of cars like the Fiesta in favor of increasing its light truck and SUV lines, Steve Bott says.