SALEM, Ohio – On any given day, the Salem Public Library will see 500 or more people walk through its doors. Some come to borrow one of its 85,000 books, DVDs or magazines, while others build plastic models on a 3D printer or participate in daily free programs, says Brad Stephens, director and fiscal officer of the Salem Public Library.

“As we look at the quality of life that’s available to the citizens of Salem and in the surrounding areas, there’s always something to do here,” he says. “There’s something to do that isn’t going to cost a lot of money, and provide a great opportunity to their family to enjoy themselves, learn a few things and get to meet other people.”

Attendance at the library’s programs last year was greater than Salem’s population, which was just under 12,000, according to the U.S. Census Bureau estimate from 2017. Last year, more than 18,000 people came to the library’s 900-plus programs, Stephens says.

The programs are for all ages and range from traditional story-time events to hands-on classes on how to make ice cream or fly a drone.

“Strong libraries help to create strong communities,” he says. “The library is very heavily used by the community and the community turns out and supports the library.”

The library on East State Street sits in the Salem Downtown Historic District and was founded with a $17,500 grant from Andrew Carnegie. It has been part of the community since it opened in 1905. But it isn’t the only entity involved in providing free programs to the community.

Five years ago, when Shane Franks became the recreation supervisor of the Salem Parks and Recreation Department, he met with Stephens and asked if they could partner together for a new program, Go Wild in the Park!

“We had a common goal to provide educational programming for the community,” Stephens recalls. “Working together we could provide far more than we could independently.”

Go Wild in the Park! is free and open to all ages. It started with four programs a year and has grown to two programs per month, which are held at the library or in one of Salem’s five parks and recreation areas.

On Aug. 20, Go Wild in the Park! will have a program on bees at Waterworth Memorial Park, where anyone who attends can learn about bees from an industry expert.

“The parks are a vibrant part of any community,” Franks says. “There are plenty of recreational activities available here, whether it’s a free concert, or it’s a Go Wild in the Park! program or coming to our swimming pool.”

Some of the activities in the parks include boating and fishing on the lake, an outdoor swimming pool, a splash pad and Swing & Things playground at Centennial Park, a nature trail, eight ballfields, six tennis courts, four basketball courts, a dog park and 10 pavilions.

A free Summer Concert Series at Waterworth Park is held every Sunday evening through Aug. 19 and features bands such as The Four Freshman, The Sensations and the John Hampu Band.

“Parks are where most recreational activities are going to take place if not in your backyard,” Franks says. “We want to make sure that it’s a positive experience for visitors and when they leave, no matter what they were doing, they’re going to say, ‘That was fun. I can’t wait to come back.’ ” 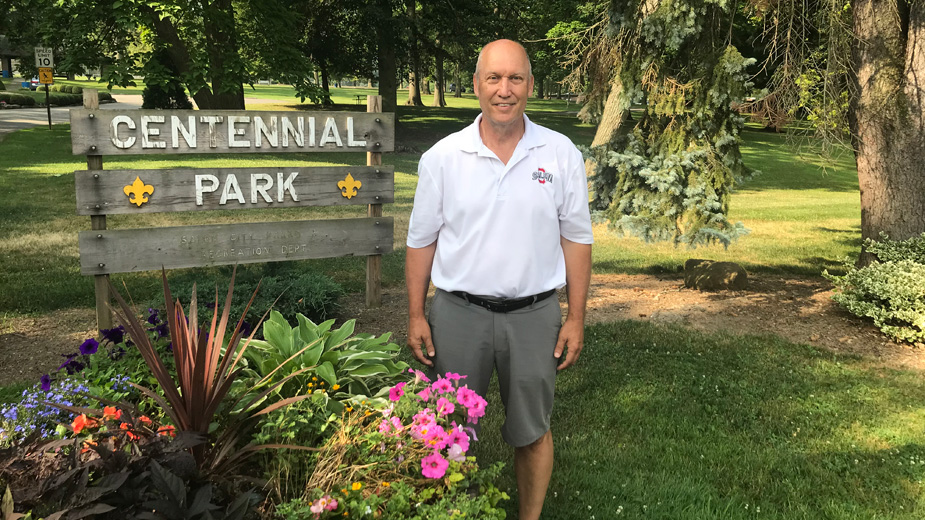 Pictured: Shane Franks, Salem parks director and recreation supervisor, has a list of projects he would like to see accomplished, including adding a park office in Centennial Park.

In February, Franks was appointed the parks director and since then has started to make updates and repairs to parts of the park system that have been neglected.

He’s also created a list of goals for the department, including a $20,000 project to repair and replace items on the Swing & Things playground, resurface the tennis courts at Memorial Park, build a park office in Centennial Park and offer a movie night for families at Waterworth Park in the summer.

“I know how important a strong park program is to a community,” Franks says. “How it can attract people, whether it’s where to move or where to live. Parks are part of that decision making for a lot of families looking to relocate or move.”

Harry Hofmeister, owner of Hofmeister Realty & Auction Co. on East State Street in downtown Salem, says he’s been receiving more calls recently from people who are moving to Salem, often moving back from other areas of the country.

“Some of them are people who have tried to live in other spots in the country and don’t like the culture,” he says. “We just had a young couple move back from Atlanta because they wanted their kids to be raised in a different culture than Atlanta offered.”

Sales of existing homes over the last three years have been strong, Hofmeister reports, and there is more interest in renovating apartments above businesses in downtown Salem.

Salem’s culture is different from many neighboring communities because of the downtown area, he observes.

“So many communities in the area have not been able to maintain their downtown,” Hofmeister says. “You can walk down the streets of Salem and certainly you feel safe and see somebody you know and that’s unusual in today’s society.”

David Mollenkopf, president and CEO of Crabb Insurance Agency, moved back to Salem 15 years ago to help operate the business on East State Street.

Since returning, he’s noticed a renewed focus on the downtown area and locally owned businesses.

“The [Salem Area] Chamber of Commerce has created so many programs focusing on small-business owners and festivals downtown that draw a lot more attention to the service and retail industry in town,” he says.

One of the new programs downtown is a joint-effort initiative by the Salem chamber and the Downtown Salem Partnership called Salem Second Saturday.

On the second Saturday of each month, a different theme and program takes place in the downtown district.

July 14 was Salem Sidewalk Sale, where anyone could walk downtown and shop various sales held by businesses and restaurants. A watermelon theme was celebrated for National Watermelon Month during the sidewalk event.

The Salem Historical Society on South Broadway Avenue participated by opening its gift shop and Romanian exhibit for anyone to stop in who was walking the sidewalk sale.

“Every Second Saturday, we’re open and we have something happening,” says Ginger Grilli, president of the Salem Historical Society. “We want to support efforts that are going to make our future as vibrant as our past was.”

On Aug. 11, Salem Second Saturday will feature Art Appreciation, where local artists’ works will be on display.

Other events this year have tied in with Salem Second Saturday, such as Freed Fest, a daylong music festival in May celebrating the Salem native who coined the term “rock ‘n’ roll,” and the Salem Super Cruise in June.

“Stores are welcome to host their own events on Second Saturday,” says Ben Ratner, vice president of the Downtown Salem Partnership and owner of Lib’s Market.

Recreational activities open to the community play a part in the quality of life that is provided to residents, says Julie Needs, executive director of the Sustainable Opportunity Development Center.

“We need to provide those sort of things to our residents,” she says. “It brings in people from the outside to see what we have. Maybe they’re looking for a new job and see an open position and with all the activities we have, maybe they choose to live here.”