YOUNGSTOWN, Ohio – Mckenzie Nicole Lesko has always heard stories about her uncle Charles who served in World War II. These stories, and even some of her uncle’s personal items her grandfather kept inspired her to enlist in the Air Force Reserve.

“My grandfather was always talking about his brothers who served,” Lesko says. “My uncle is buried at Arlington National Cemetery in Washington, D.C.”

Lesko enlisted at Youngstown Air Reserve Station or YARS, and will serve as a commander’s assistant at the 910th Airlift Wing. She is working in the development training flight once a month until she leaves for basic training at Lackland Air Force Base, San Antonio, Texas.

Lesko is a recent high school graduate and typical of a new recruit, just learning the ropes and getting excited.

“Our recruits serve once a month in the development training flight that teaches military basics. They are paid to perform physical training and learn military basics like the chain of command,” says Senior Master Sgt. John Wood, flight chief of Air Force Reserve recruiting at YARS in Vienna Township.

“We have 70 trainees in the development training flight,” Wood says.

“It gets slow through June and July, but picks back up during the August timeframe,” he says. “Our biggest boom is January and March when we see a lot of high school seniors.”

With Marine, Navy and Army recruiting stations in Boardman and Air Force recruiters just a short drive from the Eastwood Mall in Niles, there are many options for high school graduates. Recruiters seek high school graduates who can meet the physical requirements and pass the Armed Services Vocational Aptitude Battery. 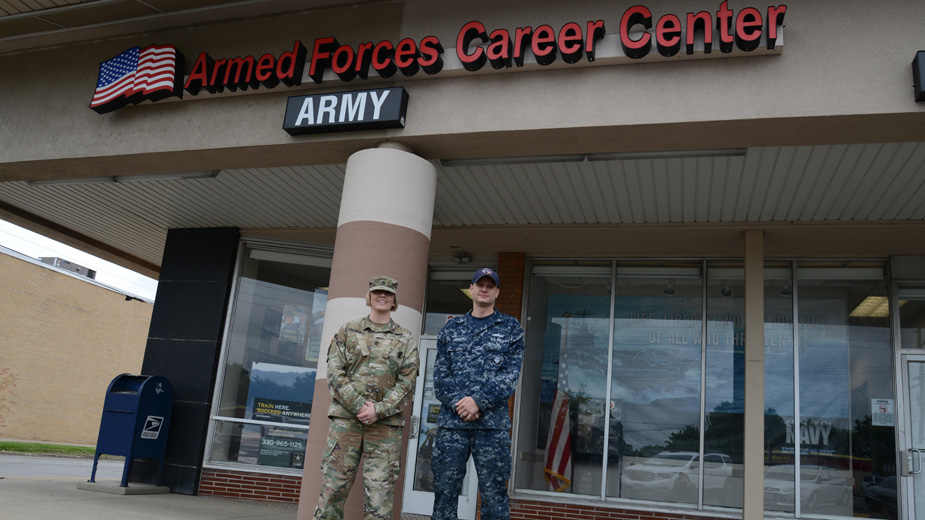 The test varies slightly among the branches and is divided into four qualification areas: general, mechanical, administrative and electrical. Results are used to determine what duties for which an applicant is best suited.

“Eight graduating seniors this year at Boardman High School chose to go into the military, including one Annapolis candidate [for the U.S. Naval Academy],” says Amy Radinovic, communications coordinator for the Mahoning County Educational Service Center.

According to Boardman High School administrative assistant Jodi Marlin, each branch of the military visits about once a month during the school year. “A few times a year we will hear from the Army National Guard and the U.S. Coast Guard as well for visits,” she says.

A common theme for all four branches is the recruiting websites that include professionally produced videos. The Marine Corps website features a news-style video that highlights the efforts of the Marines to deal with the spread of terrorism in Somalia.

“The Fight Against Al-Shabaab” video runs just over two minutes of graphic news footage describing events in the horn with the African arm of Al-Qaeda. The video then highlights the Marine Corps efforts to train Ugandan forces to stabilize the region.

Another route for those interested in serving is the ROTC.

“Last year, we had 40 cadets enrolled in the program, two of which were seniors that graduated and entered the Army as second lieutenants,” says retired Army Lt. Col. Joseph Paydock, chairman of the military science department at Youngstown State University.

“Next year, we will graduate five students and the following year we’re anticipating around 10 graduates,” he says.

The ROTC program has seen an increase in enrollment and overall GPA in the past few years, Paydock says.

Another incentive to join the military is tuition assistance offered through the GI Bill. The program, established in 1944 as The Servicemen’s Readjustment Act, pays education benefits based on military service. The benefit pays anywhere from 40% to 100% of tuition based on the length and type of service.

“When it comes to competing with the local job market, you will be hard pressed to find a business or company that can beat the benefits that the Army has to offer,” says Army Sgt. 1st Class Kimberly McGinness, station commander at the Army’s Boardman recruiting center.

All in the military must enter through a recruiter, military academy or military college or university.

According to McGinness, the post-9/11 GI Bill covers more than $66,000 for college tuition. “The Army also offers full medical benefits and housing allowances,” she adds.

Benefits are always a consideration for most when choosing a career, military or otherwise.

“Bonuses per job title in the Navy can vary based on demand at any particular time,” says Petty Officer Jake Umbright who serves as Navy recruiter for Mahoning, Trumbull and Columbiana counties.

Recruiters fill job positions just as any employer. The demand depends on the job.

by The Warren Flea & Farmers Market - 2 hours ago