Remnants from the WPA and the New Deal

YOUNGSTOWN, Ohio — There is a section along South Schenley Avenue – not quite 50 yards long – in Youngstown just north of Volney Rogers Middle School that appears strangely out of place with the rest of the street. Each side of the thoroughfare is bracketed with retaining walls about four feet high and constructed of expertly cut stone fit snuggly into perfect symmetry.

A closer look over the side of these walls reveals that they’re simply the crests of a more massive project – a viaduct composed of thousands of stones that spans a wooded ravine and Ax Factory Run Creek, which eventually spills into Lake Cohasset in Mill Creek Park.

Most motorists headed north or south on the avenue would never know they’re traveling over a bridge, let alone pay much attention to the cornerstones on the wall fronting each approach. Weeds have obscured one of the sandstone nameplates that greet northbound traffic, while the southbound marker is clean and visible: “WPA 1937.”

The Ax Factory viaduct is just one of dozens of building projects still functioning today that were initiated by the Works Progress Administration and other programs more than 80 years ago during the throes of the Great Depression. It was this “alphabet soup” of agencies – the WPA; the Public Works Administration, or PWA; the Civilian Conservation Corps, or CCC, for example – that formed the bulwark of providing relief and recovery efforts under President Franklin Delano Roosevelt’s New Deal. 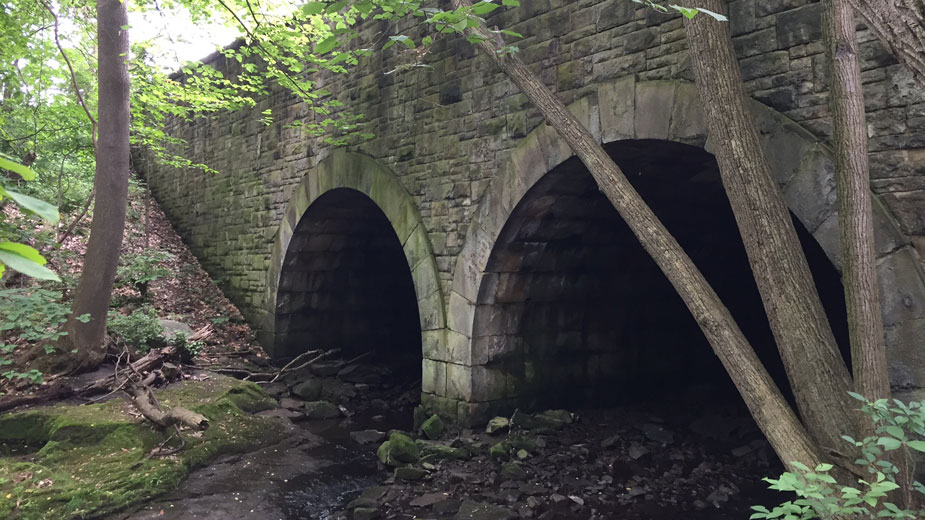 Pictured: Workers employed by the WPA built this viaduct on Schenley Road in Youngstown.

“Historians are going to debate the legacy of the New Deal inside out and upside down,” says Donna DeBlasio, professor of history at Youngstown State University. “If you look at broad numbers and employment figures, it might not have done as much as some historians say,” she says, noting that unemployment remained high throughout the 1930s despite these programs.

However, the important impact of the New Deal is that it brought hope to those the Depression devastated, DeBlasio says. “It felt like they were doing something. People were getting work and there was energy there,” she says. 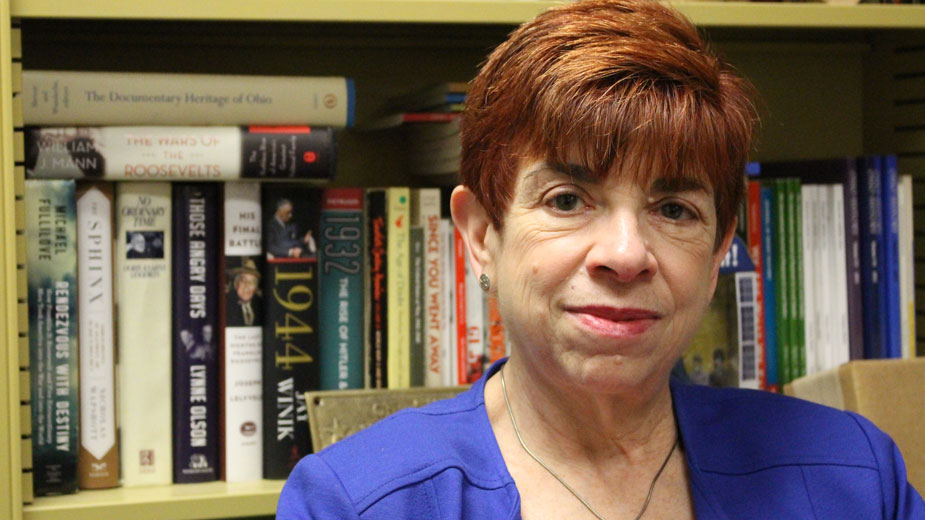 Roosevelt was elected in 1932 and launched the New Deal when he took office in March 1933. Initially, the public works effort was spearheaded by the PWA, in which the government provided funding to state governments and private interests that were tied to large-scale public works projects – hospitals, schools, airports, dams, housing – thus stimulating employment by “priming the pump.”

By 1935, the Roosevelt administration inaugurated a second phase of the New Deal and in April, Congress passed the Emergency Relief Appropriation Act, which created an agency that carried a broad, comprehensive public works effort – the WPA. The agency not only encompassed building and construction, it also provided direct employment for writers, teachers, folklorists, actors, historians and artists.

“Under the WPA, the government hired people directly, whereas the PWA didn’t,” DeBlasio says. Those men and women hired by the WPA on construction projects were people who were unemployed, mostly unskilled, and would otherwise be enrolled on relief. Instead of larger projects covered by the PWA, the WPA focused on more community-oriented endeavors such as public parks, sidewalks, schools, post offices, roadway improvements and bridges.

DeBlasio says her maternal grandfather – a mason who emigrated from Italy – worked for the WPA when private-sector jobs dried up. “When times were tough, they thanked God for the WPA,” she says. “It was important for their survival.”

The ultimate objective was to provide work instead of placing citizens on relief rolls, DeBlasio says. “The payment was higher than a handout, but less than what you would make in the private sector,” she says.

Still, it was a job, and the WPA has its imprint stamped on numerous projects visible today across the Mahoning Valley.

“My neighborhood still has WPA sidewalks from 1936,” DeBlasio says. “If you look around, you’ll find that the WPA built high school stadiums, parks, post offices galore, government buildings. And some of the murals inside of these buildings are stunning.”

Many of these New Deal era murals remain on display today, especially in area post offices. The Hubbard post office, for example, boasts a WPA era mural depicting men at work in the steel industry, one tending a blast furnace while two others handle a coil operation. In the background stand the teeming smokestacks of the industrial age.

“These murals were intended to connect to the history of the region,” says Ken Bindas, professor of history at Kent State University who specializes in the New Deal era. “They were supposed to be storyboards that outlined the people of the Mahoning Valley.”

Not only do these murals convey the image of labor, they emphasize that cooperation between workers and industry is vital to maintaining peace and commerce across American society.

“There was always in the background the image of industry and commerce – conveying the sense of working together,” Bindas says.

New Deal programs funded trails in Mill Creek Park, playgrounds, ballparks and numerous other community-oriented projects, Bindas notes. “There was a tremendous move toward recreation. On one hand, it gave people employment and on the other hand, it took kids off the street.”

More important, Bindas says, programs such as the WPA and PWA were not established to resurrect the devastated economy.

“It wasn’t about solving the economic riddle,” he says. “It was about bringing investment into the community. And these were good programs.”

A closer look across the Mahoning Valley turns up dozens of projects funded by the WPA and other New Deal programs. The pavilion at Crandall Park, for example, boasts a large stone fireplace with a large WPA stamp dated 1936. A retaining wall at the corner of Mahoning and West avenues in Youngstown contains the WPA signature from that same year. 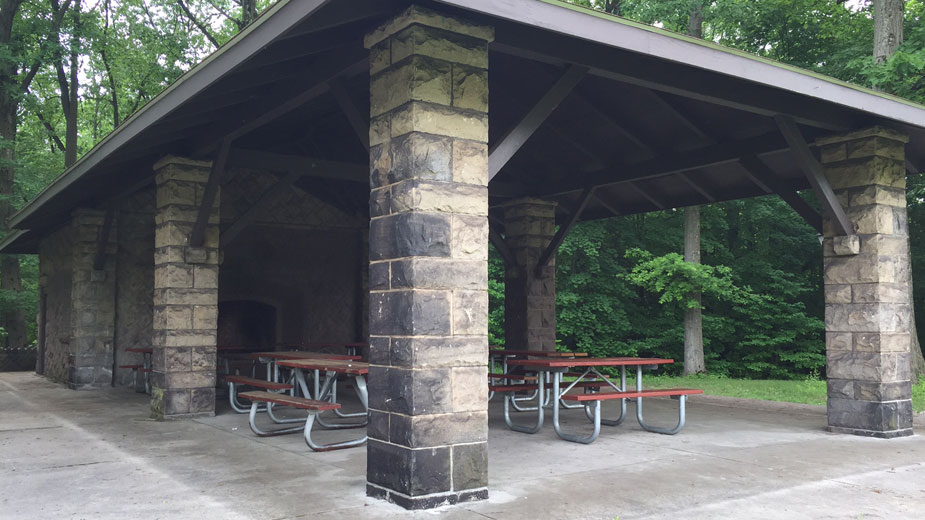 Pictured: The pavilion in Crandall Park in Youngstown was built in 1936.

Now privately owned, the WPA Memorial Building once housed a branch of the Reuben McMillan Library, a theater, and murals hand painted by artist Ralph Ellis on the third floor of the building that convey a Masonic theme.

The murals have since been covered by drywall. The building was used as government offices during World War II. Several business offices operate from the building today.

Among the last WPA projects completed before the agency was disbanded in 1943 was construction of Youngstown Municipal Airport, which opened in Vienna Township in 1940.

In Ohio alone, WPA workers were responsible for building or improving 12,300 miles of roads, the construction of 636 public buildings, hundreds of athletic fields and parks and more than 300 bridges.

Other programs such as the Civilian Conservation Corps also had an effect in the region.

The CCC, established in 1933, employed men between the ages of 18 and 25 in forestry and other conservation disciplines. It was the CCC that planted most of the forested areas that today line the Meander Reservoir.

The WPA employed more than 8.5 million people across the country on more than 1.4 million projects, although it’s difficult to determine precisely how many in the Mahoning Valley were employed through these programs, DeBlasio says.

Besides employment, though, agencies such as the WPA provided important training that prepared workers with skills that were transferable to the private sector when the economy improved.

“It was a good way to give people the experience they needed,” DeBlasio says. “It’s a valuable lesson. The work that people did day in and day out that built this area was really important. And that’s something we need to celebrate.”

Pictured above: A WPA-era mural depicting men at work in the steel industry is still visible at the Hubbard post office. In the background stand the teeming smokestacks of the industrial age.

YOUNGSTOWN, Ohio – Buoyed by $500,000 in funding from the Ohio Department of Development and BroadbandOhio, the Eastgate Regional Council of Governments announced Wednesday the start of the engineering phase for the Lake-to-River Fiber Line project along the state Route…