Rhine Haus to Open in Time for Oktoberfest

YOUNGSTOWN, Ohio — Come September, a new German beer house should be opening its doors on N. Phelps Street in time for Oktoberfest, which begins Saturday, Sept. 22 in Munich, Germany.

Rhine Haus Bier Hall is the newest project for restaurateur Christian Rinehart, and will open next door to his Suzie’s Dogs and Drafts at 34 N. Phelps Street. The two restaurants will share the same building – a concept that’s worked well for Rinehart’s Suzie’s and Mission Taco Boardman location.

Rinehart had been using the 2,700-square-foot space for storage up until a few weeks ago when crews set to work on initial demolition. In the process, they found some relics from when the building served as a German deli in the 1920s, including a placemat menu advertising a brisket corned beef and swiss cheese sandwich for just 85 cents. Wood beams that cross the high ceiling are being preserved, and Rinehart plans to restore the original tile flooring, he said. A seal on the wall near the ceiling from the original German plastermaker will be preserved as well and repurposed to hold German flags.

Most of the construction now is cosmetic, including new paint and flooring. Given the nature of the beer hall, overall construction is “much simpler than the other projects,” Rinehart said.

“A German beer hall is just a big open room,” he said. “So this lends itself to an easier buildout.”

All told, the renovation will cost around $200,000, he said. Garage doors will be installed at the front of the building to be opened weather permitting. Furnishings will include the traditional long, wooden tables found in German beer halls, along with three grandfather clocks that are being specially made by Fenton Contracting in Youngstown. Fenton built the custom liquor cabinets in Suzie’s. 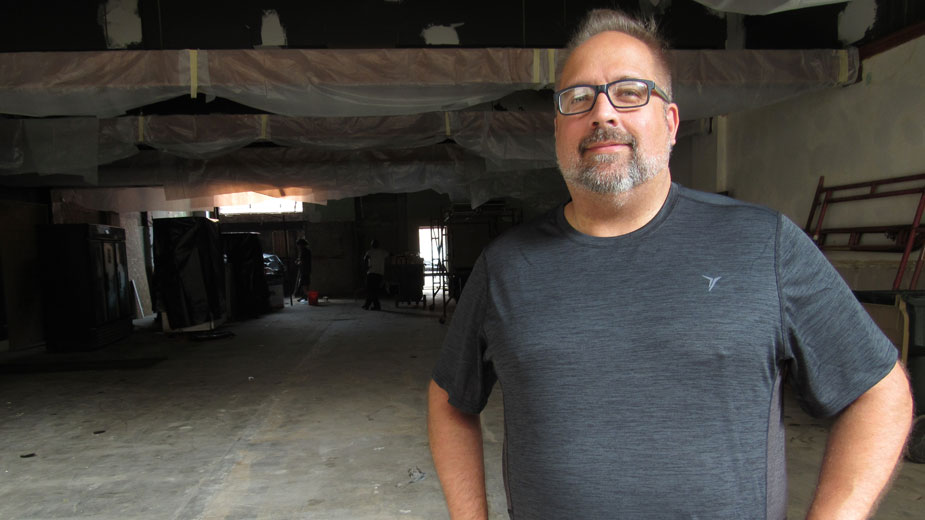 Christian Rinehart said the nature of a German beer hall makes for a simpler construction process.

Rinehart is putting together a mural of the former Renner Brewing Co.’s logo using brick gathered from the brewery on Pike Street along the Mahoning River. The building itself has collapsed. According to RiversideCemetaryJournal.com, George J. Renner Jr. purchased the brewery in 1885 and incorporated the company in 1914, which expanded into a $600,000 corporation in the pre-prohibition era.

“Renner was a bigger brewery than Anheuser-Busch before Prohibition,” Rinehart said.

Rhine Haus will serve traditional German food, including schnitzel, sausages, spaetzle and pierogies with some 20 different fillings, he said. Pierogies will be served with various toppings, like rice or sauerkraut, “so you can really build a meal out of it.” The restaurant will serve beer imported from Germany as well as selections from local breweries. Rhine Haus will feature polka music nightly and Rinehart said he’s in the process of hiring a band leader.

In addition to the main dining area, Rinehart is adding a members-only speakeasy. Annual membership costs will includes four individual passes. He looks to potentially do about 150 to 200 memberships and hopes to draw a more professional crowd, he said.

“That part is meant to be very much just for bringing friends and family so you don’t have to worry about all the craziness going on downtown,” he said. “You can go and get your dinner, no fuss no muss.”

Rhine Haus will likely be closed during lunch hours to accommodate a program in partnership with Choffin Career and Technical Center, Rinehart said. He’s been working with the school to develop the program for culinary students to give them some real-world experience in the restaurant industry.

The program will run students “from A to Z” on running a restaurant, including the basics of entrepreneurship, how to take inventory, determining profit and loss, managing social media, pricing a menu, purchasing food and “developing a menu that makes people want to come eat,” he said. By educating and encouraging students at a young age, he hopes more will open their own restaurants downtown to keep the local economy moving forward, he said.

“My goal is long-term to turn this into a charity thing and give out scholarships so they can open their own business,” he said.

Rinehart looks to renovate the upstairs office space as well, putting it back into service since the the 1980s. He plans to rent out nine to 12 satellite offices to people who typically work from home but sometimes need to meet with a client.

He has another project in the works for downtown Salem. He and his wife have purchased a building there where he looks to open a Suzie’s and Mission Taco, but is “probably a year away from that project,” he said.