YOUNGSTOWN, Ohio – Reid Schmutz gazed around the Palladian Ballroom on the top floor of the new DoubleTree by Hilton Downtown Youngstown.

The space is far different from what it looked like when he was vice president of operations for Standard Slag Co., which occupied the upper levels of the Stambaugh Building until the building was sold in 1989.

“When you got off the elevator, there were offices for secretaries,” recalled Schmutz, who worked in the building more than 20 years. Elsewhere on the 12th floor were sales offices, the boardroom and offices for executives.

To take what was once a building filled with offices and “turn it into something like this is fantastic,” he said.

Schmutz, pictured above, and other members of the Rotary Club of Youngstown toured the DoubleTree following lunch at the hotel’s Bistro 1907 for the organization’s weekly meeting.

“Of recent turning points in downtown revitalization, this is probably the most important,” said Scott Schulick, vice president of investments for Stifel, Nicolaus & Co. in Canfield.

Like Schmutz, Schulick has a history with the building. His first job interview with what was then known as Bank One was held there in 1994, he recalled. The bank’s main Youngstown office was on the opposite side of Wick Avenue but its human resource department was in the Stambaugh Building because of space constraints.

The hotel’s presence “affirms that you can invest in downtown, that you can create an economic engine that will continue to advance growth in so many areas,” said Schulick, the incoming district governor for Rotary District 6650. “It also makes us feel like we’re a real city, that we have a hotel that people can come and stay and enjoy the development with that,” he said

Addressing the Rotarians were Paul Hagman, an architect who addressed the historic preservation aspects of the project; members of the hotel management team; and developer Dominic Marchionda, who welcomed the group to the property. Marchionda’s NYO Property Group redeveloped the Stambaugh Building as the DoubleTree, which opened two weeks ago.

“I am seeing faces back in downtown Youngstown that I haven’t seen in a long, long time, whether they’re here just to have dinner, lunch, might be breakfast,” Marchionda said following the Rotary meeting.

Earlier in the day, he recalled, he encountered a guest who was checking out. The guest said his stay was “magnificent” and praised the courtesy and professionalism of the hotel staff. 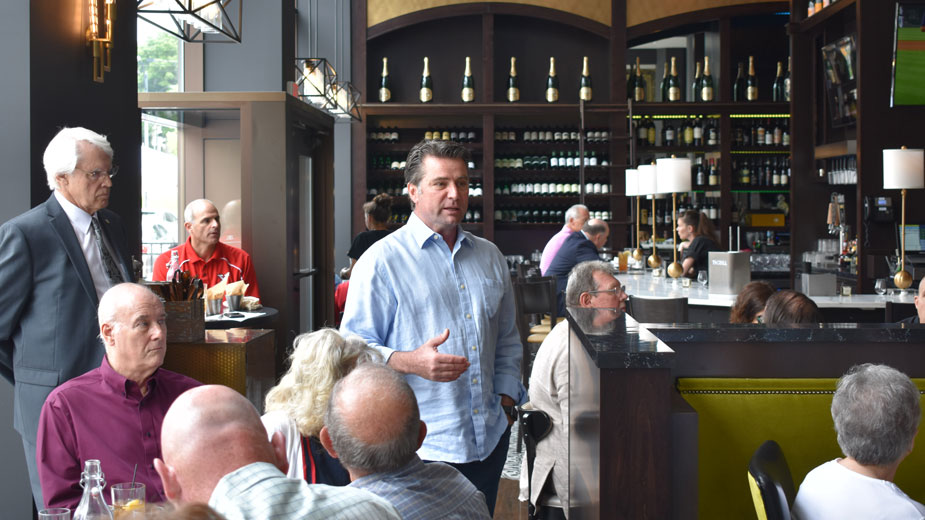 After being at or near sold out in the early days, occupancy is running around 70%, reported director of sales Amy Liakaris. “It’s been a great first two weeks and, as far as the future goes, it’s looking bright,” she said.

“We’re seeing a lot of different groups of people each day coming in,” said Dave Rizzuto, director of operations for Pan-Brothers Associates Inc. in New York, which partnered with NYO on the project.

In terms of bookings and operations, the hotel has exceeded expectations since opening, said general manager Steve Mitchell. “It’s actually been challenging to respond to calls in a timely manner,” he said.

Since opening with 29 employees, the hotel has added a doorman and sales staff, Mitchell reported. “We’ve had some opportunity to revisit some of the operations” of the hotel itself and with Bistro 1907, “so it’s been very productive,” he said.

“The response from the Mahoning Valley to Bistro 1907 has been overwhelming,” owner Mark Canzonetta.

Business at the restaurant, which has been fully open for about a week, was about 40% higher than expected during the first week, especially given the holiday weekend and high school graduations, he said. The heavier-than-expected traffic has necessitated fine-tuning the kitchen, including spending $10,000 more on equipment including an additional fryer, cooler and prep tables, as well as additional staff.

Aimee Fifarek, who moved here from Arizona last year to take over as executive director of the Public Library of Youngstown and Mahoning County, attended the Rotary meeting as a prospective member.

“I love to see this kind of reuse of historical space. Back when buildings like this were built, they had such great bones and solid construction,” Fifarek said. “The historical details that they kept are amazing.”

The library will appreciate having the downtown hotel for authors and other visiting speakers it will host, she added, and for candidates being interviewed for positions at the library. In addition, she is looking forward to the opening of two additional restaurants in the hotel, Branch Street Coffee Roasters and Yosteria, which are expected to open this summer

“Having good places to walk to downtown for lunch is always a plus,” she said.

Phil Kidd, associate director of Youngstown CityScape and a longtime proponent of downtown development, said he frequently hears others refer to the hotel as “a crown jewel” not only for downtown but also for Youngstown as a whole. He also praised the hotel project as “a credit” to the Historic Preservation Tax Credit program, which helped make the project possible.

“It’s a fantastic example of what’s possible through that program,” Kidd said.

Pictured at top: Reid Schmutz’s office at Standard Slag Co. was once on the 12th floor of the Stambaugh Building. The floor is now the hotel’s Palladian Ballroom