CANFIELD, Ohio – Trying to stem Mahoning County’s annual population loss by giving young people a reason to stay is the top priority for the state senator-elect of the 33rd district.

During the program presented by the Youngstown/Warren Regional Chamber, Rulli said a lot of his rationale for running came from his brother, Frank. A senior associate with Faniro Architects involved with several downtown Youngstown projects, Frank Rulli told his brother that Mahoning County loses between 1,700 and 2,200 people annually, either from death or leaving the state. “How do you replace that?” he said.

Rulli’s plan for stemming that loss boils down to one word: creativity.

“You have to have creativity. You need to have a reason for these millennials to stay here,” he said.

Education is key, he said, though that doesn’t mean college is the path for everyone. By seventh or eighth grade, students should be introduced to other possibilities, including the skilled trades. Rulli said he has people with master’s degrees who are bagging groceries in his stores.

The longtime area grocery-store operator criticized excessive regulation of business, from bank loan requirements to environmental constraints. “That has to change. I was elected for that to change,” he said. 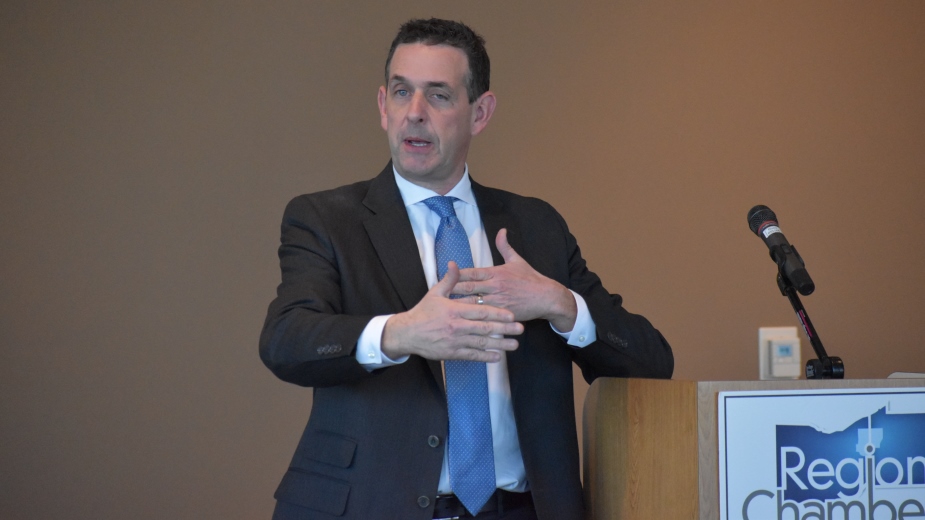 Rulli said the community needs to be creative to have a reason for millennials to stay in the area.

He also blamed multiple regulations from various federal, state and local agencies for creating burdens that led to the demise of several independent grocers in the region. He cited a point-of-origin labeling requirement that, if signage doesn’t specify when the same item originates from two different areas, could result in a $2,000 fine.

The regulatory discussion spurred a spirited exchange with some of the chamber members in attendance.

Zerbonia responded that the grocer was complaining about a regulation that can be fulfilled by simply entering information into a computer and generating a new label. “It’s that kind of thing that gives deregulation a bad name,” he said. “Go for something that’s really going to cause you troubles.”

Regulations don’t just afflict small businesses, Steve Kristan, director of external affairs for AT&T, pointed out. There are right-of-way issues that can extend the permit process to six months.

“Money flows where it’s most welcome,” he added.

“What he’s talking about is a real problem. You shouldn’t have to wait that many months,” Zerbonia said.

“It’s a ‘push me, pull me’ for communities that have a reduced tax base and they’ve got to make it up,” she said. “It’s not so simple.”

She disagreed with Zerbonia that businesses reflexively oppose all new regulation.

Rulli also was critical of local opposition, which he characterized as “unacceptable,” to the $160 million regional distribution center that the TJX Companies Inc. has proposed building in Lordstown. Now the region has a “bigger problem” following General Motors’s announcement it would end production of the Chevrolet Cruze at its Lordstown plant in March.

Rulli expressed support for the $10.2 million federal transportation grant for improvements on and near Fifth Avenue in Youngstown, including the implementation of autonomous shuttles. “That’s going to help change the culture of who we are,” he said.

Since the election, individuals have brought a litany of problems to his attention, many of whom are looking to the state capital budget or rainy day fund to resolve their issues, he said.