Ryan Fires Back at Critic as Early Voting Concludes

WARREN, Ohio – U.S. Rep. Tim Ryan fired back at a detractor who accused him of criticizing Minority Leader Nancy Pelosi to raise his profile for a potential 2020 presidential run, and defended his efforts on behalf of fellow Democrats.

Ryan, D-13 Ohio, was appearing with supporters at the intersection of East Market Street and North Road when he learned of the CNBC story speculating about a potential second challenge to Pelosi for leadership of the Democratic caucus following today’s midterm election.

An individual identified at a “senior Democratic aide close to Pelosi” called Ryan a “shameless self-promoter” and said the congressman “has done nothing but exploit his criticism” of her “to get himself on TV and prepare for a presidential run.” Ryan challenged the California Democrat following the 2016 general election.

Challenging Pelosi is “not what I’m really looking at,” though there are “conversations taking place,” he said. He described the criticism as “a little bit of an overreaction. I’m trying to help Democrats, and if the leader’s office thinks it’s good to take shots at a member of her own caucus, then she’s setting the wrong example for going into a potential opportunity for us to lead Congress,” he said.

Ryan pointed out that he is being criticized in his own re-election bid for his travels to support other Democratic candidates in areas, many of whom are in districts where Pelosi — who has been effectively demonized by Republicans — isn’t welcome.

Earlier Monday he campaigned in western Pennsylvania to support Ron DiNicola, who is challenging Republican U.S. Rep. Mike Kelly, to represent the newly configured 16th District,. Ryan’s travels have taken him to southwestern Ohio, West Virginia, South Carolina, Kentucky and Indiana as well. And he campaigned in Iowa, where J.D. Scholten, the Democrat running to unseat U.S. Rep. Steve King, has stated he would not support Pelosi as leader.

Ryan and a few dozen of his supporters occupied three of the four corners at the East Market Street and North Road intersection. He waved at passing motorists as his supporters – who included his wife, Andrea; their son, Brady; and other elected officials – waved signs at the passing cars, a scene reminiscent of his early campaigns.

“We thought we’d get the band back together.” The intersection is, in fact, one of the “key corners where it all started,” he recalled.

The congressman is being challenged by Republican Chris DePizzo, a Youngstown native now residing in Cuyahoga Falls.

As DePizzo, Ryan and all candidates were making their final push before Election Day, county boards of elections were busy wrapping up early voting, which ended at 2 p.m. Monday.

According to Ohio Secretary of State Jon Husted’s office, an estimated 1,491,762 absentee ballots had been requested and 1,313,844 were returned as of yesterday afternoon. 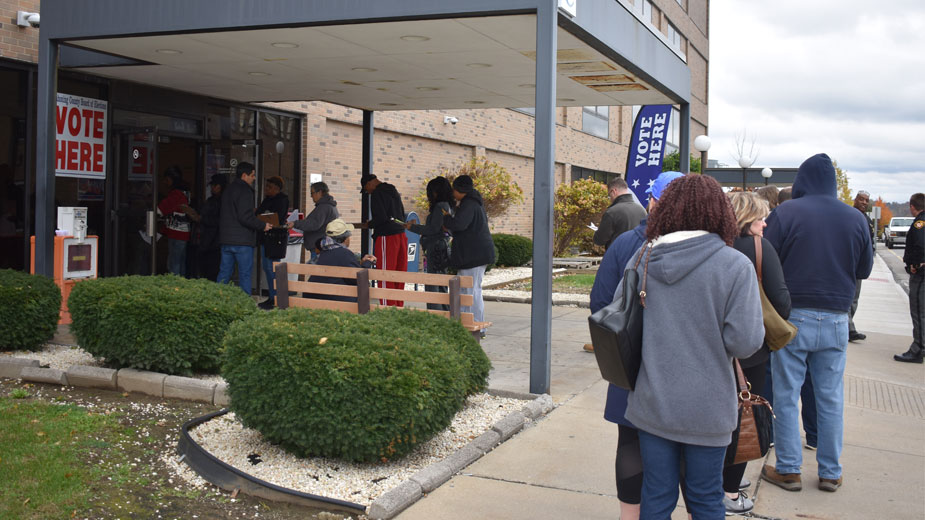 “The amount of people who voted yesterday and today make me feel like it was a presidential election,” Stephanie Penrose, executive director of the Trumbull County Board of Elections, reported late Monday. The Trumbull board opened at 8 a.m. and averaged 74 people per hour. “We didn’t get the last voter out until almost 3,” she said.

After early voting closed at the Columbiana County Board of Elections in Lisbon, Adam Booth, director, reported 7,713 absentee ballot requests, including 1,728 voted in-office.

“Activity today and over the weekend was steady,” he said. “At times, the lobby was full with fast-moving lines.”

Booth was uncertain whether the early voting signals higher overall participation numbers. There was “no real way of knowing” whether the higher absentee totals indicated an increase in overall voter turnout or just a shift of people who would have voted on Election Day.

“My hunch is that it’s slightly higher turnout than usual,” he said.

At the Mahoning County Board of Elections in Youngstown, the line was snaking out the door of the entrance to its office at Oakhill Renaissance Center, and voters filled out absentee ballot applications on clipboards as they waited.

“From 8 o’clock on, it’s been busy,” he said. The Monday before Election Day usually is because people find out at the last minute they won’t be able to cast their ballot the next day because of work or other circumstances, he said.

The 2 p.m. closing gives elections officials time to put those who voted into the system and entered onto poll books. “It’s a safeguard so they can’t show back up [Election Day] and cast a ballot,” he said. 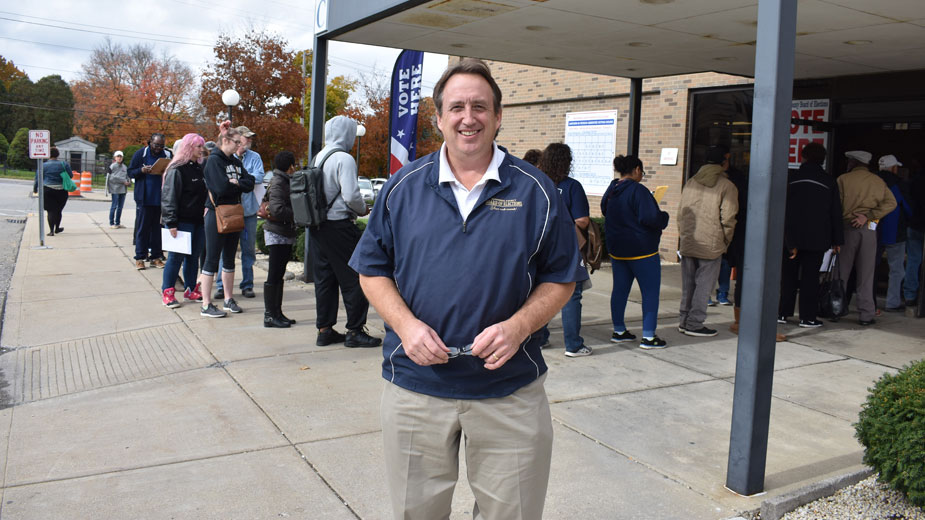 Tom McCabe is deputy director of the Mahoning County Board of Elections.

Sunday’s crowd was even larger that yesterday’s, with the line stretching to the end of the building, reported former state senator and state representative, Bob Hagan.

Hagan joined his wife, state Rep. Michele Lepore-Hagan, handing out sandwiches and snacks to her campaign volunteers outside the board of elections.

Lepore-Hagan said the political environment is unlike any she has seen in 32 years of campaigning, including 28 for her husband’s races, she said. People realize that who gets elected as governor or state representative makes a difference in their daily lives, she observed.

“People are really engaged and they want to hold elected officials accountable,” she said. 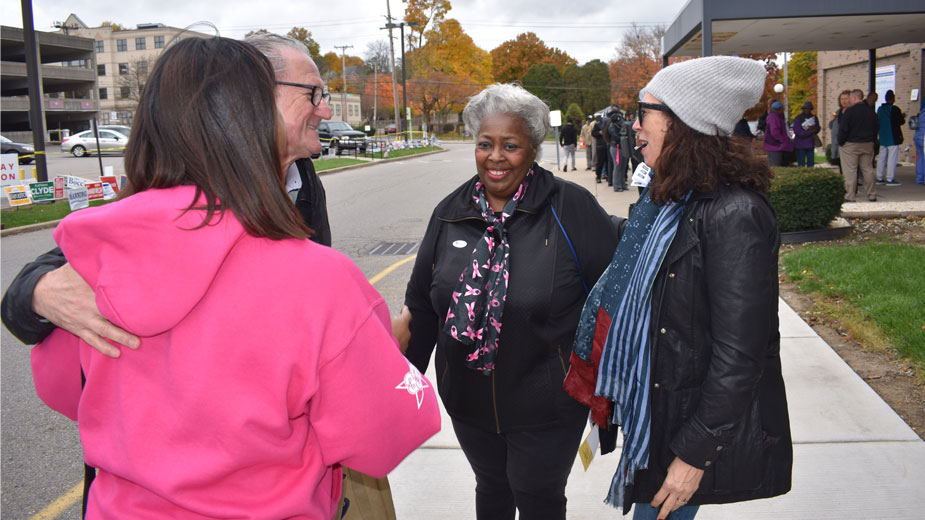 State Rep. Michele Lepore-Hagan and former state senator and state representative Bob Hagan meet with Nicole Stringer and Virginia Henderson outside of the board of elections.

Among those waiting in line was Heather Anderson of Poland.

Anderson, who said she was voting for the interests of the working class and not the 1%, is encouraged by reports that early voting numbers are high. “I think there should be more,” she added.

Also voting Monday was Dan Mauch of Canfield. “I got called out of town this week so I won’t be here to vote,” he said. He doesn’t think much is different about this election other than it appears to be more sensationalized, he said.