ELKTON, Ohio – U.S. Rep. Tim Ryan says the longer the government shutdown continues, the more dire the situation for federal employees who are either furloughed or working without pay.

“If they don’t get paid in the next week, there’s going to be a lot of people who are not going to be able to pay their mortgage, credit card bills. They’re really living paycheck to paycheck,” the congressman said.

Ryan, D-13 Ohio, visited the Federal Correctional Institution Elkton in Columbiana County Tuesday in order to speak with administrators and employees there, more than 300 of whom are on the job but are not receiving a paycheck.

“We’ve got to figure out a way to get these people paid,” Ryan said during a press conference outside the prison. “I would also encourage the local community support systems – the banks, the credit unions – to please take into account what they’re going through.”

Workers at the prison received their last paycheck Jan. 3 and were due to receive another Jan. 11, but that is unlikely because of the shutdown.

“It’s having a huge effect on them and they’re worried because they’re hearing this could go on for months and months,” Ryan said. “There’s a lot of stress that goes with that.”

Nevertheless, Ryan said all of the workers he talked to have acted with the highest professional standards despite the uncertainties.

At issue is an impasse between Congress and the White House over border security as part of an appropriations bill that would fund the government this year. President Donald Trump has requested $5.7 billion to construct a wall across the U.S. border with Mexico, while Democrats have remained firm that they would not pass any legislation that includes funding for a wall.

Without a deal – and it appears that no agreement is in sight – the government moved into partial shutdown on Dec. 22, leaving federally funded museums, National Parks and several departments closed, affecting 800,000 employees nationwide.

Yet Ryan said it makes more sense to employ the latest surveillance and monitoring technology to beef up security at the border, rather than spend billions of dollars on a wall.

“Let’s find a way to make the immigration system start to work. We can start processing people legally,” he said. “That to me seems like a pretty reasonable position.”

Several weeks ago, Trump had all but agreed to a resolution to the issue, supporting a move to fund the government without explicit language for a wall, Ryan said. It was only after conservative media outlets launched a visceral attack on Trump that he backed down and dug in on his demand for wall funding.

“Let’s fund all of these areas of the government until September, which would include the Bureau of Prisons, which means these folks get paid,” Ryan said. Border security programs would be funded through Feb. 8, which would allow a month of congressional debate over immigration policy, he noted.

Trump is to appear on national television Tuesday night, making his case to the American people over the importance of building a border wall. The president has also indicated he would consider declaring a state of emergency in order to procure funding for a wall. The president has said in the past that violent criminals and drugs regularly cross the southern border into the U.S.

The Drug Enforcement Agency’s 2018 National Drug Threat Assessment said that most of the drugs coming into the country do so through ports of entry, smuggled in through automobiles and other products, not with illegal immigrants.

“Republican senators in border states don’t think the wall is a good idea,” Ryan said. “We have technology, we have drones, we have aerostats, we have [electronic] fences.”

For Trump to blame Democrats for the shutdown is merely a distraction, Ryan said. “The president keeps insisting that he wants $5 billion for a wall. He couldn’t get that through a Republican Senate right now.”

Plus, Trump’s rhetoric that the shutdown could drag on for months does a disservice to those who are directly affected, Ryan added. “It’s disrespectful to these workers,” he said. “We’re looking like a Third World country.”

“The president needs to understand the pain he’s inflicting because of his temper tantrum in shutting the government down,” Brown told reporters in Cleveland.

Joseph Mayle, president of the American Federation of Government Employees Local 607, said that some of the workers at the Elkton prison are working 12- to 16-hour days without pay. The union represents about 315 employees at the prison, many of whom are trying to reorganize bills and preparing for the worst. 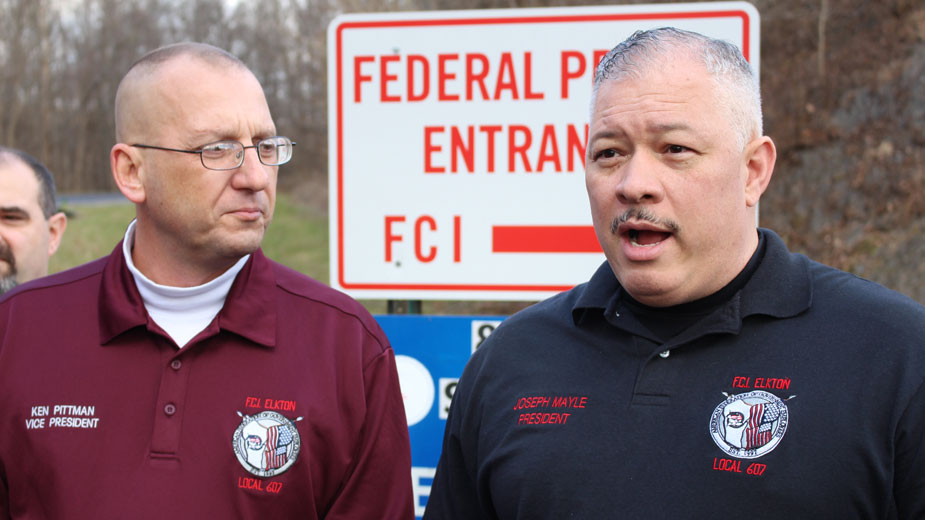 “We’re forced to work without pay,” Mayle told reporters from outside of the prison. About 2,500 prisoners are housed at Elkton.

He said he doesn’t know how the employees would react should the shutdown continue – whether they would leave their jobs or not report to work.

The AFGE filed a lawsuit against the United States government in the U.S. Court for Federal Claims in Washington D.C. Dec. 31, challenging the government’s authority to force employees to work without pay.

“We’re here 24 hours a day,” said Meghan Fitzsimmons, secretary at Local 607. “We’re not shut down. All of us are required to work.”

Pictured at top: U.S. Rep. Tim Ryan held a press conference outside the Federal Correctional Institution Elkton Tuesday to highlight workers who are working without pay as a result of the shutdown of the federal government.