Bond insists the drink be shaken because he likes his drinks very cold, but he leaves the rest of the preparation up to the bartender.

However, there is one instance when 007 was far more picky.

In Ian Fleming’s first novel, Casino Royale, Bond orders a martini made with, “Three measures of Gordon’s, one of vodka, half a measure of Kina Lillet.”

He then orders the bartender to shake it “very well until it’s ice-cold, then add a large, thin slice of lemon peel.”

Bond would go on to name it the Vesper, after his love interest in the novel, Vesper Lynd.

But even a recipe as specific as the Vesper will often get tweaked slightly depending on the person who orders it, or the watering hole where it’s ordered.

“James Bond shakes it. We stir it,” says Alex McDowell, in the classic bartender pose – leaning slightly forward with both hands on the bar and both arms straight.

“If it’s vodka, I shake it because I want it to be nice and cold,” he says. “If it’s gin I don’t want to lose the botanicals so I’ll stir it.”

McDowell has been a bartender for decades and he’s seen tastes and drinks come and go.

What his customers are ordering these days, when they come to Gatsby’s at the Avalon Inn in Howland, are Prohibition-era cocktails such as the martini and the old-fashioned – although everyone wants it with his own twist. 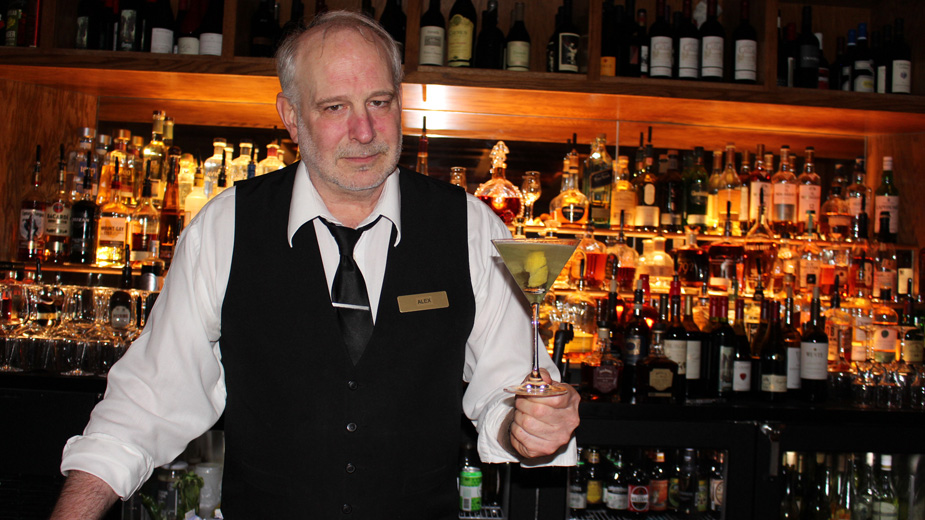 “What we do is try to find what somebody’s tastes are. And my joy is to take what they like and try to expand it a bit,” he says.

At BoneShakers at The Timberlanes Complex in Salem you can find bar manager Adam Geer hand-grinding candied walnuts and researching the best cherry juice – not the first image that comes to mind when one pictures a bartender.

“Basically, you have to be ready for whatever the customer drinks because they may drink it at home in a way you’ve never heard of,” he says.

Geer is also seeing more demand for classic cocktails, with vodka and whiskey drinks the most popular.

“Bourbon drinkers, Manhattan drinkers, they tailor their drinks,” Geer says. “Even though there’s only two or three ingredients, they want a little more of this, a little less of that.”

What most agree on, and have come to expect he says, is that the whiskey drink be served with a single two-inch square ice cube.

“It chills the drink effectively but it doesn’t water it down as fast,” he says.

WATCH: Geer shows some of his secrets for a good Bloody Mary

No matter how you order your drink at Homestead Kitchen and Cocktails in Columbiana, it will likely include local ingredients.

“We call it hyper-local,” says bartender Joseph Kingsley Conkle with a laugh.

And when he says hyper-local, he means it. Most of the ingredients that go into the drinks at the restaurant are grown right behind the bar on its herb wall.

“For our mojito, we source all of our mint right from the wall,” he says.

Conkle uses a rolling ladder to reach the herbs he needs as customers order. “It’s been a big hit,” he says.

While herb walls and large ice cubes certainly provide flash when first observed, bartenders agree that what keeps customers coming back is their ability to make a drink exactly the way the customer wants it, consistently. 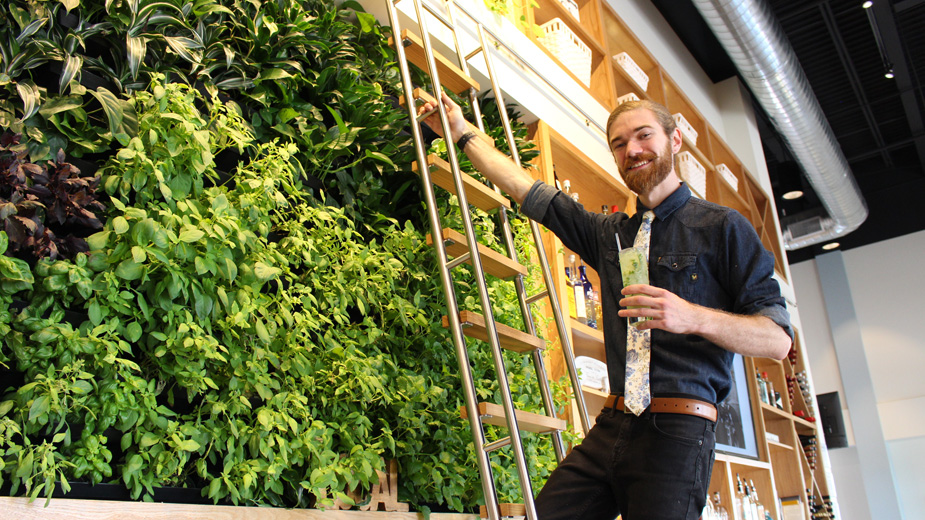 “Nothing’s traditional anymore,” says Geer. “Everybody tailors it to how they like it.”

WATCH: Conkle shows us how they use fresh herbs to elevate their cocktails

Bryan Jones, the food and beverage director at the Avalon Inn, says every recipe, even a simple martini, can be tailored to individual tastes.

“Some people prefer it ‘dirty,’ which means it comes with olives and some of the olive juice, while others order it ‘filthy,’ and you just dump the juice right in,” Geer says.

The biggest martini trend bartenders report is customers ordering their martini “dry,” which means with little or no vermouth.

“A lot of people now are kind of scared of dry vermouth,” Conkle says, “but we aren’t scared of it by any means.”

Bartenders have to get inventive to come up with ways to add the minuscule amounts of vermouth people request, without pouring too much.

Conkle prefers to pour some in the glass and swirl it around, then dump it out and pour in the rest of the ingredients.

“So it’s barely in there but you still get the aroma of it,” he says.

Geer says some bartenders will shake the vermouth in the shaker, strain it and then chill the vodka with the same ice.

“Some bars now have it in a spray bottle so you can just mist it,” he says.

Still, for some customers even the mist is too much.

“They’ll tell you, ‘Don’t even look at the vermouth while you’re shaking my martini,’ ” Geer says with a laugh.

The Manhattan, like the martini, contains only four ingredients. Traditionally, it’s made with whiskey, sweet vermouth, bitters and a cherry garnish.

“It’s a little smoother,” he explains.

Conkle forgoes the cherry because they aren’t in season locally and instead uses a cherry bitters to complete the drink.

“When they get in season, we’ll change the recipe,” he says.

Because most of what’s being poured only has a few ingredients, bartenders say those ingredients have to be good.

“The trend over the past 15 years is people are drinking less and they’re drinking better,” says Jones.

As a result, bartenders have to pay careful attention to their selection.

Geer stocks more than a dozen types of bourbon and still gets requests for brands he doesn’t have.

“Bourbon drinkers always have a plan B. If we don’t have their brand, they’ve got a plan B and even a C,” he says.

Another way bartenders are boosting the quality of ingredients is to make them in-house.

Conkle infuses his own vodkas with local ingredients such as lavender. He also makes his own Curacao, a blue liqueur with a bitter, orange flavor.

Most Curacao you can purchase is “just a premade mix with food coloring to make it blue,” he says.

“We infuse the Curacao flowers with our orange liqueur and it adds a lot more flavor.”

Still, all of this isn’t to say you can’t order any of these drinks any way you like.

“We want the customer to be drinking for themselves and what they like,” Conkle says.

Once a customer asked Geer for a Long Island Iced Tea with amaretto instead of triple sec.

“It threw me off a little bit because I’ve never even heard of that before,” he says.

Regardless, he made the customer his drink.

When asked if there are any rules for how to order a drink, McDowell leaves no room for interpretation: “Absolutely not,” he declares.

“My theory is that if you’re buying the drink, you drink what you like,” he says.

WATCH – On The Menu: Bartenders put their own twists on old classics

EAST LIVERPOOL, Ohio – A lawsuit seeking more than $2 million has been filed in Columbiana County Common Pleas Court against FRX Real Estate Holding Co. of Ohio LLC by the general contractor who worked on its new medical marijuana…

Inspiring Minds Regroups And Rebuilds in 2022

WARREN, Ohio – After the pandemic and three devastating floods at its Warren headquarters, Inspiring Minds focused on regrowth in 2022. “The pandemic challenged our access to students, resources and opportunities. But losing everything in the floods challenged our ability…