It’s the third business for entrepreneur Jerome Franklin, who owns Starting Lineup Barbershop and Beauty Salon at 47 Central Square and The Smoothie Bar next door. The spa is located in the lower level of the Realty Towers building. Its entrance is next to the barber shop.

“This is a great day,” Franklin said. “It’s been a long time coming.”

“This is just a prime example of what happens when you get small business to invest in your downtown,” Brown said. “That’s what makes it thrive. Small business owners are the catalyst for economic development in any community.”

With more businesses opening their doors, it helps create an atmosphere downtown that is “inviting and welcoming to everybody,” Oliver said.

“We’re here to celebrate another grand opening of a great business downtown,” he said. “It shows that the entrepreneur spirit is alive and well in Youngstown.”

Franklin opened his downtown barber shop in 2015 after operating on Hillman Way since 2006, and business is good, he said. “I’ve done more business down here than I did in my previous location,” he said. He opened The Smoothie Bar in September.

Franklin began thinking about putting in a spa last year and started work in February to build it. Services include massages, waxing, manicures, pedicures, facials and makeup. 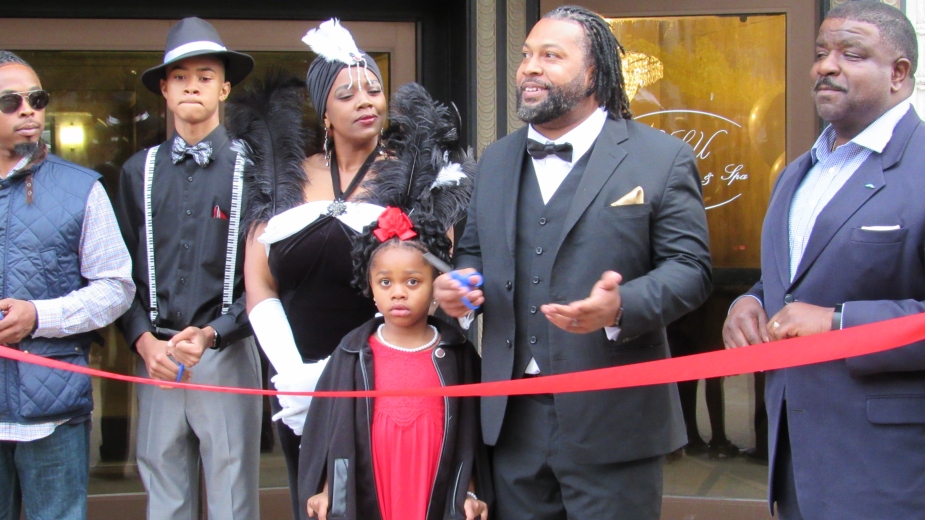 Franklin hopes to attract customers from downtown businesses, Youngstown State University and guests staying at DoubleTree by Hilton Youngstown Downtown. To accommodate people who work downtown, the spa will have some expanded early morning and evening hours.

“We have some of the best massotherapists and estheticians in the city,” he said. “It’s close and convenient, so you don’t have to rush to get off work to go up to the Boardman or Poland area. You can come here on your lunch break.”

Feedback is positive among people downtown, said Terrill Vidale, coordinator of downtown events and special projects for the city. The city helped to promote the business, he said.

“People say they’ve been waiting for something like this. The anticipation is there,” he said. “Jerome Franklin is just a shining star. He’s one of the success stories having three businesses right here in downtown Youngstown.”

Vidale says he plans to announce more businesses opening their doors, including one this Friday and a retail shop that should open Nov. 19.

“We have a lot of good things going on in the city,” he said.