YOUNGSTOWN, Ohio — The owners of The Soap Gallery say they wanted art – not beer – to be the drawing card when they opened the downtown Youngstown venue in October 2015.

Stephen Poullas and Daniel Rauschenbach met in 2009, when Rauschenbach curated an art exhibit featuring his paintings and photography by Poullas.

The two “became fast friends” and subsequently exhibited their works together.

“All of our exhibits were in bars,” venues that offered challenges for selling art or promoting the artists, Rauschenbach says. “You can’t have the beer be the first attraction. It has to be the art.”

Launching a space “devoted specifically to just the art,” along with art-related activities formed the core of the for-profit gallery’s business model.

The criteria for selecting works are simple.

“I don’t like to do shows that don’t have the possibility for the artist to make money, which in turn doesn’t make us any money,” Poullas says.

Occasionally the gallery will show “statement pieces,” but for the most part the operators choose “whatever catches our eye that we think will appeal to the public and bring more awareness to the artist and to the art itself,” he says.

“The biggest part is creating a platform for the artist to showcase,” Rauschenbach adds. 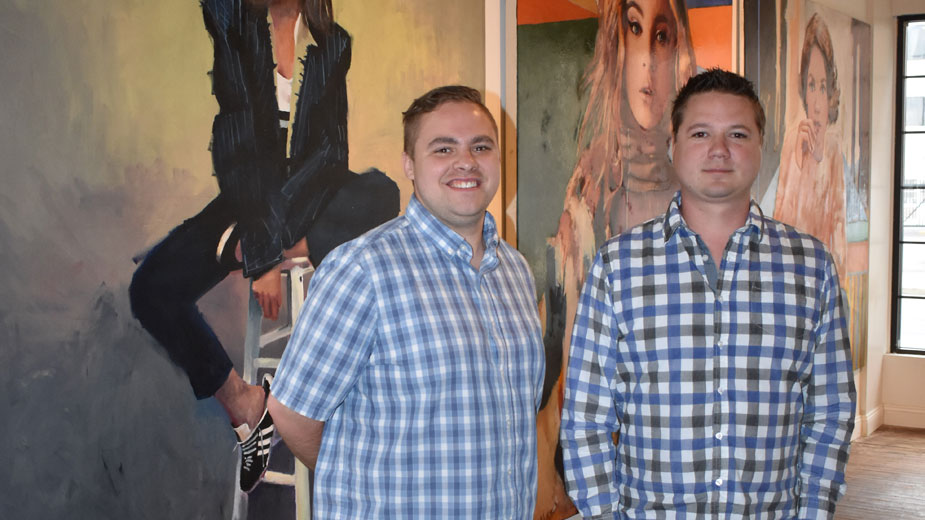 Daniel Rauschenbach and Stephen Poullas founded The Soap Gallery in 2015.

The gallery derives its revenue from two sources: art sales and booking events in the space. It charges a 35% commission above what the artist wants for the work, although there is some “wiggle room” with that percentage, Rauschenbach says. “We want the artist to benefit from his show.”

Most of the gallery’s income is from art sales, according to Poullas.

“We’d like to be as dependent on that as possible,” he continues. “Long term, we’d like to not even have to worry about events. But who doesn’t want to have a party in an art gallery? It’s as classy as it can be.”

Then, there’s the dynamics behind artwork pricing.

“Everybody always uses the term ‘Youngstown prices.’ I think Youngstown artists price their artwork to be reasonable so that anybody in the country can afford their art, because they want people to appreciate their work on all levels,” Rauschenbach says.

Pernotto and Armeni both like the space for exhibiting their work.

Next Best Art, an arts organization Pernotto founded, had an auction fundraiser at the venue.

Armeni’s works were featured in the venue’s inaugural show and he later shared a show with Tracy Segreti, during which both artists sold pieces. “All in all, for the two of us it was a good show,” he says.

One piece of advice Pernotto says he offered was not to focus on individual shows, but rather to feature exhibitions with three or four artists, and thereby reach different segments of the community.

In addition to renting the space for events such as receptions and parties, The Soap Gallery partners with nonprofits and businesses. For instance, an upcoming event with Birdfish Brewing Co. will have a class on custom glazing. Patrons can glaze their own growler, using whatever colors they like, that will be fired in an onsite kiln.

The gallery also is partnering with YM Camera on another disposable camera hunt in downtown Youngstown. For $25, participants will take a guided tour of downtown to take photographs, with The Photo Place developing the film and providing digital images.

The best part of hosting events is introducing visitors who might not ordinarily go to an art gallery, Rauschenbach says. “Some of our biggest pieces have been taken home after private events,” he says.

The partners are looking forward to development of the city’s amphitheater and riverfront park, which will shift some of the focus to that part of downtown, Poullas says

“We need more creative spaces,” Rauschenbach says. “We need more galleries and events in the downtown to showcase and encourage more people to buy Youngstown made.”

Pictured above: Among the art recently on display and for sale at the gallery is this piece by Gary Taneri.