YOUNGSTOWN, Ohio – Area suppliers of ready mix concrete and building materials felt the sting of the housing market collapse in 2006 as new housing starts tanked and commercial projects slowed to a crawl. But third- and fourth-generation concrete suppliers such as D.W. Dickey and Son, Warren Concrete and Supply Co. and Chappell and Zimmerman Inc. survived and found ways to get back to pre-recession production levels.

Warren Concrete is exploring new product lines and services while keeping on top of the industry’s changes, says Vice President Jim Hamilton. “[The industry] has become more mechanized, more technological,” he observes. “We rely on a greater combination of chemistry and technology in our production and product design.”

And Chappell and Zimmerman Inc. of Salem has invested $500,000 in new equipment and diversified its products to serve the growing home remodeling industry, says owner Chris Chappell.

The company had it rough in 2008 after the housing crisis led to a slump in business and has returned to pre-recession levels only within the last three years, Chappell begins.

“I was just hanging on,” he says. “I was ready to close the doors.”

After serving with the Army Corps of Engineers during World War II, Robert Chappell – Chris’ grandfather – started the business in 1946 alongside his brother-in-law, Darrell Zimmerman, delivering sand, coal and building materials. 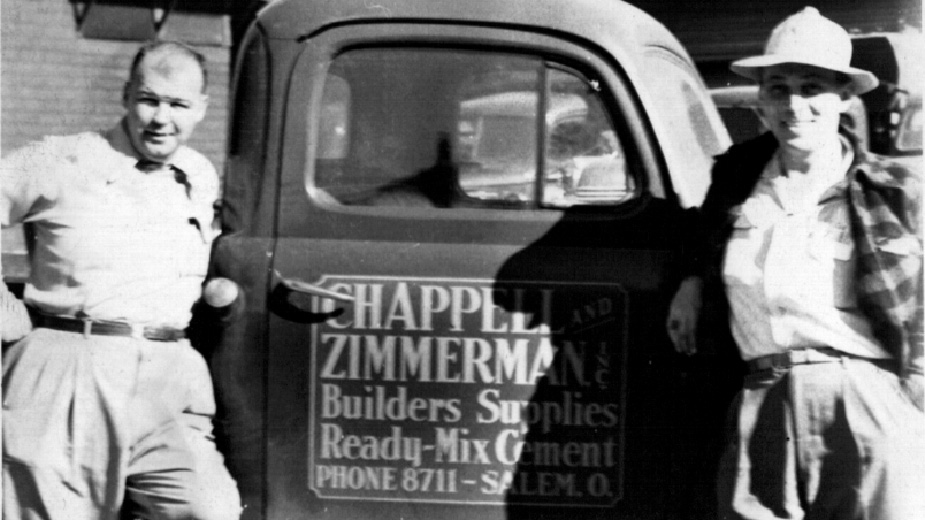 Robert’s sons, Ned and Jud, took over the company in 1970. Chris Chappell and his brother, Shawn, bought it from their father in 1998.

Chappell hired Sharon Wuthrick as bookkeeper, who helped the company collect what it was owed faster. Bills sent out monthly were being paid a month after the fact, Wuthrick says. She initiated weekly billing to speed up payments owed.

“We were two months out before we could pay for our jobs,” she says. “Now, we send them out right away.”

The company also halted spending. It held on to its cash rather than buy equipment and workers were laid off when work was minimal.

During the winter, a skeleton crew of Chappell, Wuthrick and the head mechanic, Rodney House, ran the company.

Drivers were still on call, but rarely called back until the start of the season in April. The company sold five mixer trucks, three boom trucks, a dump truck and a semi-trailer truck to keep the lights on and satisfy creditors.

“We were scrambling,” Chappell says. “The phone wasn’t ringing for any customers, but the collectors were calling.”

Ten years later, Chappell and Zimmerman has most of its fleet back with nine mixers, two boom trucks, a semi and two dump trucks. And it employs 13 seasonal workers who belong to Teamsters Local 92, Canton. 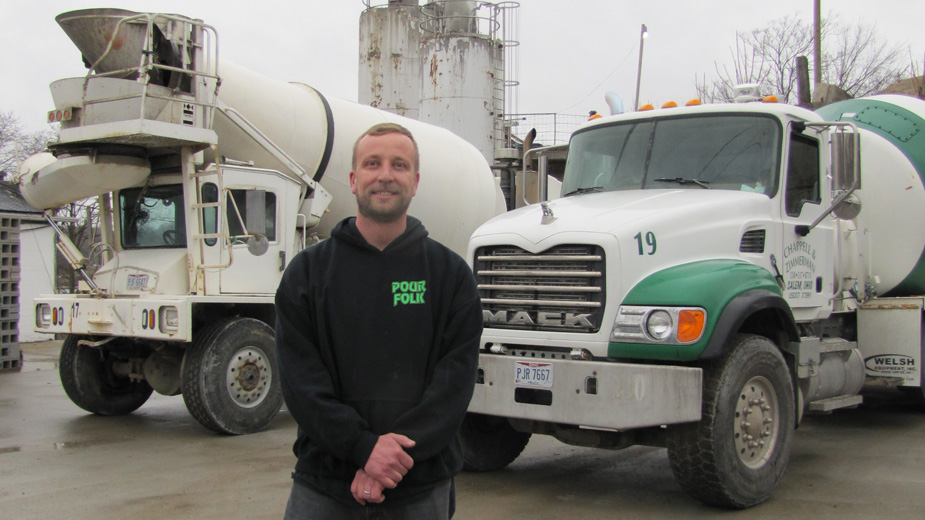 Pictured: Chris Chappell is the third generation at Chappell and Zimmerman Inc.

As part of its turnaround, the company built a second concrete storage silo to comply with the Ohio Department of Transportation’s mix specifications and registered its mixes with the state so it can supply ODOT jobs.

And to meet the needs of nearby home builders and remodelers, the company now carries decorative paving products and custom concrete colors for interior and exterior projects.

The oil and gas industry helped D.W. Dickey secure new business opportunities, although much of its work is spread over commercial, residential and municipal jobs, division manager Ramsey says.

And over the last few years, the company did considerable work for the state, especially in the Steubenville area.

State work helped establish the company’s reputation when it made the jump to concrete in the early 1960s after operating as a feed mill since 1948. In 1982, D.W. Dickey purchased the former Rohrer’s Concrete site in Columbiana, followed by its Steubenville plant in 1999, bringing total operations to four.

Dickey’s first big concrete project, the Jennings Randolph Bridge, came in 1977 and “put us on the map,” Ramsey says. At 754 feet, it’s the largest Pratt truss bridge in North America and spans the Ohio River to connect East Liverpool with Chester, W.Va. At the time of the project, the company operated a plant on both sides of the river, one in East Liverpool, the other in Chester. Once the job was completed, it closed the Chester plant.

Another big concrete project was construction of the Federal Correctional Institution in Elkton, a low-security prison for men. That project, completed in the mid-’90s, lasted nearly four years.

Some customers have been with D.W. Dickey more than 30 years and such relationships are vital, Ramsey says. Keeping workers trained in the increasingly technical aspects of concrete has helped the company remain strong, he adds. 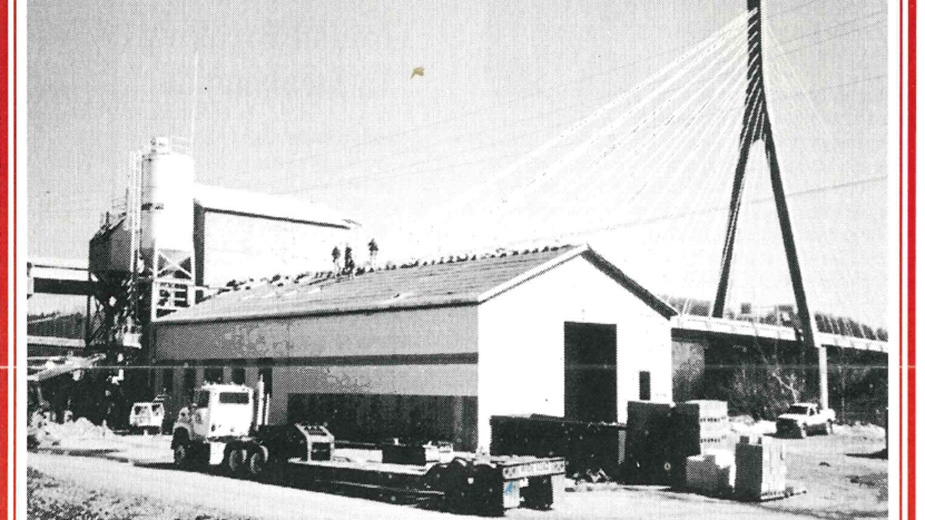 Pictured: D.W. Dickey & Son got into the concrete business when it bought Rohrer’s Concrete.

Since Warren Concrete and Supply Co. was founded in 1920 by Burton N. Hamilton and Arthur Meigs, the company has supplied concrete to thousands of Trumbull County housing construction projects, says Vice President Hamilton. But in recent years, the lack of new construction in the residential, commercial and industrial sectors has taken its toll.

“Today, we’re tearing houses down,” Hamilton says. “We’re tearing down steel mills rather than building and improving them.”

Hamilton and his brother, Rick, are fourth-generation operators of the company. They’re investigating new product lines and expanding their customer base, he says.

Concrete suppliers from Mahoning County have expanded their reach “and they come into Warren and Trumbull County quite often.” Warren Concrete seeks to develop partnerships outside of the area so it can serve a broader territory, he says.

Competition is fierce, he says. To win bids, Warren Concrete relies on its nearly 100 years of experience and knowledge as well as the capabilities at its Parkman Road plant.

“We maintain the most modern concrete batch plant in Trumbull County,” Hamilton says. “We keep our fleet in excellent working order. We sell quality rather than price.”

The company sits on a seven-acre property, but is looking for more space. That would allow it to branch out into specialized pre-casting products, such as large retaining wall blocks, concrete traffic barriers and decorative items, Hamilton says.

“Those are some of the things that we could actually produce and sell over the internet and ship nationally,” he says.

Municipalities provide reliable projects about twice a year that take a lot of concrete, he says. Warren Concrete supplied several thousand cubic yards for the Niles Wastewater Treatment Plant upgrade project that will be completed this year, and Hamilton is looking forward to potential work at the Camp Ravenna Joint Military Training Center.

The Mahoning Valley Sanitary District’s expansion project in Mineral Ridge “kept us busy for two years,” he says. And with Cafaro Co. moving its headquarters to Niles, Warren Concrete supplied concrete for the 50,000-square-foot building and several of the hotels under construction there.