As work moves toward the finish line, it does so without Dominic Marchionda as manager of Stambaugh Holdings LLC — the development company formed to spearhead the project.

Marchionda resigned as a manager of Youngstown Stambaugh Holdings Nov. 15, one month after he was indicted on 102 counts ranging from aggravated theft to engaging in a pattern of corrupt activity, according to a notice the company sent to the city.

A third partner, James Pantelidis, consented to the appointment, according to the document.

“Because of Dominic’s situation, it was determined that it was in the best interests of the project to have a new manager,” said Martin Hume, the city’s law director.

A receptionist at Pan-Brothers’ New York office said there was no one available to comment on the new arrangement.

Marchionda, the CEO of NYO Property Group, could not be reached for comment Thursday. A bill of particulars in relation to his indictment was filed yesterday by prosecutors in Mahoning County Common Pleas Court.

The city supported the project through $2.7 million in loans — $750,000 of which is forgivable — as part of a development agreement signed with Marchionda and NYO in December 2016.

Marchionda was indicted Oct. 2 on charges that he allegedly diverted grant monies he secured from the city on earlier projects for his personal use. The indictment is related to three specific projects — The Flats At Wick, Erie Terminal Place, and Wick Towers — not the Stambaugh building.

About 100 workers were busy on a frigid Thursday morning continuing work on the ambitious hotel project, hustling to meet the March deadline.

“It’s on time and scheduled to finish on March 29,” said Steve Mitchell, general manager of DoubleTree by Hilton Youngstown. “The next phase is working on installing guest room carpet, and the furniture and fixtures will be installed in January.”

When completed, the 12-story Stambaugh building will include 125 guest rooms that begin on the third floor. Eighteen of these rooms are suites – larger units that include a sitting area and sleeper sofa in addition to standard amenities such as a king-size bed, a 50-inch television, safe, and mini-refrigerator.

As many as 60 people will be hired to staff the hotel.

On Thursday, Mitchell and DoubleTree Youngstown’s sales director, Amy Liakaris, provided The Business Journal a preview of the work underway. 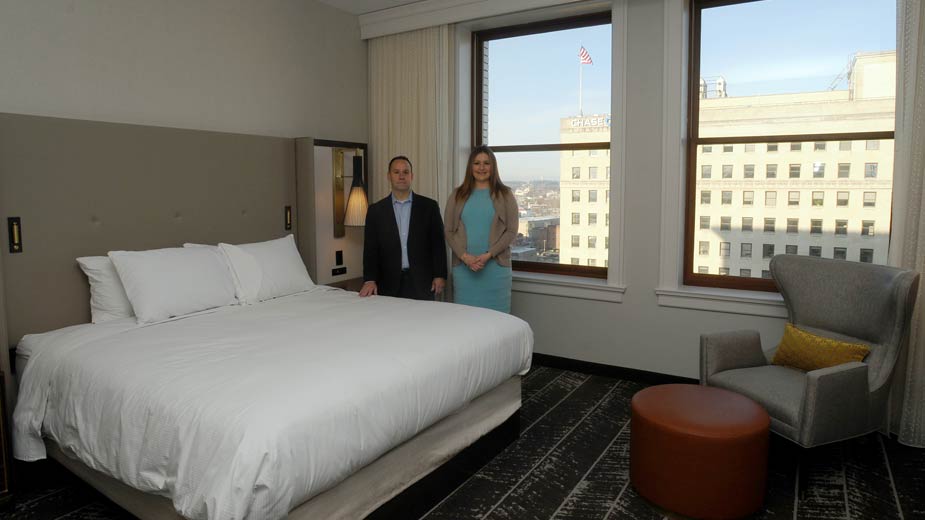 “We tried to keep the classic flow of the history of the building, and also tried to bring in a modern feel within the rooms,” Liakaris said. One model guest room is complete and fully furnished with a contemporary look, while wall hangings reflect historic images of downtown Youngstown, including early photographs of the Stambaugh building.

The first floor of the hotel will house a restaurant operated by an independent party, Liakaris said. In addition, the first floor would include a bank office and a coffee shop.

“We do have a fairly large fitness center in the basement,” Liakaris said. “You’ll have treadmills, elliptical equipment, and weight equipment as well.”

The hotel’s second floor will include the front desk and lobby, a breakfast area, a business center, sundry shop, and meeting rooms. “There’s going to be plenty of lobby space for guests — plenty of communal tables where they can plug in their computers or relax,” Mitchell said.

Guest rooms would fill the third through 11th floors in the building, he continued. The hallways are to be carpeted, while the original mahogany office doors are now integrated into the walls as decorative fixtures.

“DoubleTree has been flexible in allowing us to preserve some of those unique features of the hotel,” he said. 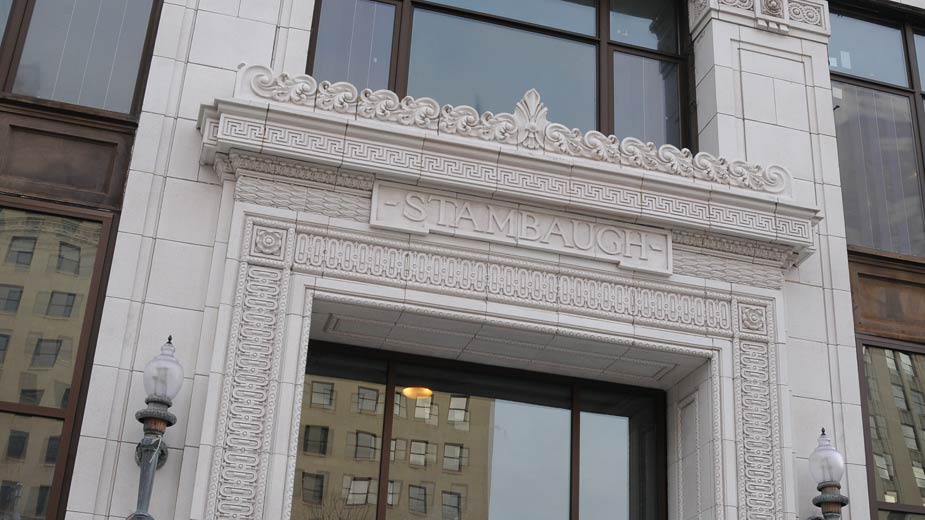 Other landmark accents inside the building were kept intact — the first floor entrance still has the ornate design work on the ceilings – and the original marble staircase, reinforced with wrought iron, is preserved.

“The fact that this is a neoclassical building that was built in 1907, and that they went to a lot of lengths to preserve as much of the architecture as possible, definitely makes this hotel unique in the Youngstown area,” Mitchell said.

The 12th floor will house a 4,100 square-foot ballroom and banquet center overlooking the downtown, and there’s contemplation of adding a rooftop bar in the future, Mitchell added.

Room rates have yet to be established.

“We’re still doing a market assessment of the area,” he noted. Interest, however, is already building within the community.

Mitchell said that a full-service hotel is a perfect compliment to the activity and energy that’s now driving downtown. “We’re so close to Youngstown State University, the Covelli Centre,” he said. “You have to drive to either Boardman or Canfield to find another hotel. I think it’s about time that Youngstown has a hotel located downtown.”

Pictured at top: Still much work needs to be completed to meet the March 29 opening date.