NEW CASTLE, Pa. — After months of preparation, structural steel can be seen rising where Ellwood Quality Steels is constructing a $60 million addition to its New Castle plant. At the same time, a short-line railroad nearby is moving heavy materials needed to supply the region’s industrial base.

In between are pockets of industrial growth around New Castle that point to a general resurgence in manufacturing in this part of western Pennsylvania, involving sectors such as oil and gas, machining, brownfield redevelopment and even medical marijuana.

“We certainly have more manufacturing in Lawrence County than people realize,” says Linda Nitch, director of economic business development for the Lawrence County Regional Chamber of Commerce. Led by the Ellwood Quality Steels project, the county is home to a variety of businesses related to the manufacturing sector that’s experiencing steady growth.

Over the past year, expansions at New York Blower Inc. and Steelite Inc. in New Castle demonstrate the commitment from manufacturers and distributors to the local economy. The region is also exploring new industrial territory with Holistic Farms in New Castle, one of the first medical marijuana cultivation sites awarded in Pennsylvania.

Nitch says more than 20% of Lawrence County’s employment is tied in some way to manufacturing, from those directly employed by producers to construction tradesmen working on plant expansions to jobs related to transportation or warehousing that haul and store manufactured goods across the region.

Work is underway, for example, on the $863 million, gas-powered Hickory Run electrical generation plant in North Beaver Township along state Route 551. The project, under development by Tyr Energy, a U.S. subsidiary of the Japanese energy giant Itochu, is expected to create several hundred construction jobs in the near-term during the building phase. Part of the reason the plant is being constructed in Lawrence County is its proximity to the Utica and Marcellus shale, ensuring a reliable supply of low-cost natural gas to fuel the new facility.

According to the most recent data provided by the Pennsylvania Department of Labor and Industry, Lawrence County employs 3,456 workers directly in manufacturing, or 12.3% of the workforce.

Other sectors tied to the county’s manufacturing economy, such as construction, employs 1,698, or 6% of the workforce, while transportation and warehousing employs 1,213 people, or 4.3% of the labor force.

Although direct manufacturing doesn’t provide the most jobs – this distinction belongs to the health care and social assistance sector, which employs 5,967 – it is the second-highest employment category in Lawrence County. But those employed by manufacturers in the county tend to earn higher wages than occupations in health care. On average, those working in manufacturing and industry earn $53,497 a year, versus an average of $34,837 in health care and social services.

The most visible sign of industrial activity is the Ellwood Quality Steels project. The $60 million expansion calls for an addition of 110,000 square-feet to house a remelting furnace used to produce steel for the aerospace and defense industries.

Jim Salvatore, operations manager at Lee Michael Industries, a building contractor and fabrication shop in New Castle, says some of the structural steel is now in place and siding for this section of the building should arrive soon. “Once we get far enough along, we can do the sheeting,” he says. “We’re at the end of the building and then we work our way down.”

Inclement weather has caused some delay in construction activity, but much of the work remains on schedule, Salvatore says. “We’ve been hampered by rain,” he says, but he’s confident the project will meet the anticipated completion timeframe of sometime in September.

Diamond Steel Co. of North Lima, Ohio, is subcontracted to perform much of the heavy crane work, while Lee Michael Industries serves as the general contractor for the project. “There are probably between 50 and 60 people out there right now,” Salvatore says.

Although Lee Michael Industries is keeping busy with the Ellwood Quality Steels project, other industrial expansion jobs are waiting in the wings, according to Salvatore. This, he says, is an indication that the region is starting to see a real, sustainable rebound in the manufacturing sector.

“It looks like other companies are looking at the feasibility of adding to their facilities and there are other bids in the works,” Salvatore says, one of which is a large-scale structure in Lawrence County. “It looks like it’s starting to break,” he says.

For those who provide services to local manufacturers, the Ellwood Quality Steels expansion is a welcome sight.

“They’ll probably be doing some outbound shipping from there,” Dale Berkley Jr., president of the New Castle Industrial Railroad, says of the Ellwood project. The railroad runs through New Castle’s industrial corridor and feeds into two major rail lines that provide access to markets across the United States.

“We’re doing a lot of trans-loading,” Berkley says. Most of this work entails hauling sand used for hydraulic fracturing operations in the oil and gas industry, the result of a partnership established several years ago with McClymonds Supply & Transit. 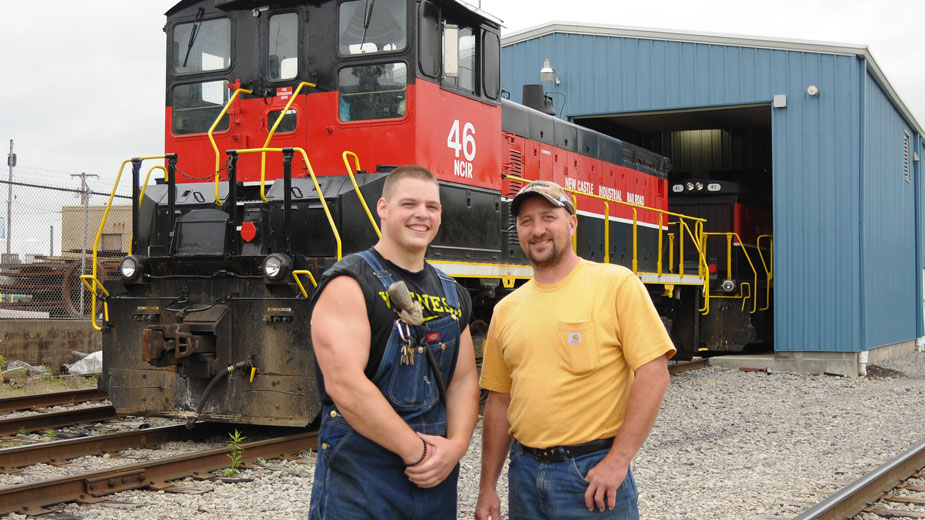 Pictured: Greg Smock and Denny Hepler work for the New Castle Industrial Railroad, a short-line that is seeing manufacturing rebound.

This segment of the business should grow exponentially in the near future, as McClymonds, under the RWE Holding Co., recently acquired a new trans-loading site along Industrial Street that would act as a hub to supply lime to the region’s steel mills.

“It should start up in the next couple of weeks,” Berkley says. “It looks like we’ll be handling 20,000 tons a year.” Lime is used in the steel-making process to reduce sulfur levels in the metal and demand for the material is on the rise.

Among the areas of growth for the rail line is the residual effect of Royal Dutch Shell’s $6 billion ethane cracker under construction along the Ohio River near Monaca, Pa. “We’re doing some minor storage with Shell right now,” Berkley says. “They’re looking for a possible overflow facility in the industrial area, so people are marketing property around here.”

The energy and oil and gas markets are still showing signs of strength in the region and attracting new investment, buoyed by the abundance of natural gas trapped in the Utica and Marcellus shale plays in eastern Ohio and western Pennsylvania.

“There’s a lot of potential here,” Berkley says. “This is going to be a pretty big deal. I think some bigger things are going to happen.”

Pictured above: Lee Michael Industries is installing the structural steel at the $60 million expansion at Ellwood Quality Steels.