YOUNGSTOWN, Ohio – Scott Schulick, one of the founders of the annual Streetscape effort downtown, called for community support  “as we beautify Youngstown and, as in superhero talk, we bust grime.”

“I didn’t write the script,” Schulick, vice president of investments for Stifel, Nicolaus & Co. in Canfield, offered in apology.

Schulick’s remarks reflected this year’s theme for the June 2 event, “Streetscape Superheroes.” It’s not “Truth, Justice and the American Way” or “With great power comes great responsibility,” but as a mantra, ‘bust grime’ served to get the point across to the audience at Thursday’s kickoff breakfast.

The theme was reflected in the speakers’ remarks throughout the program to the T-shirts with Superman’s familiar “S” shield worn by Schulick and others.

“Superheroes come in all shapes, sizes and colors. Some contribute muscle, some contribute know-how and some contribute funds,” Sharon Letson, executive director of Youngstown CityScape, Streetscape’s parent organization, said. “Now more than ever, we need all of our superheroes – guardians, defenders, fighters and benefactors, too.”

This year marks the 21st edition of Streetscape, Letson said. The volunteer-driven initiative started with Schulick – who “ran Streetscape out of the back of his car for many years” – and John Lapin, operations administrator for downtown landlord Ohio One Corp., who on June 1, 1998, “teamed up with some friends to take a stand and fight blight in our fair city,” Letson said.

The goal of Thursday’s kickoff was to call attention to the June 2 event to encourage volunteers and to solicit donations for needed materials. The intent is to raise a minimum of $50,000, Letson said. Last year, the planting and cleanup drew some 850 volunteers.

Letson also reviewed highlights from 2017. These included the 12th edition of the annual beautification awards, the installation of the disc golf course at Wick Park, and the long-awaited completion of the “transformative Wick Avenue project,” she said.

Mayor Jamael Tito Brown acknowledged this year’s theme was “right down my alley.” He admitted his kids talked him out of wearing the Superman costume he wore last Halloween. He also characterized the individual volunteers and organizations who participate in the annual cleanup and planting event as superheroes.

“It’s something amazing,” he remarked.

Downtown Youngstown Partnership, another CityScape affiliate, affixed the initial 12 cigarette receptacles to downtown signposts in early February, and they are well used, Kidd said. Once full, the discards are recycled into shipping pallets and other items.

In higher-trafficked locations, the receptacles need to be emptied every 10 to 14 days, he said. Several downtown business owners have said the boxes make “a tremendous difference,” and DYP is seeking sponsorships for additional boxes. 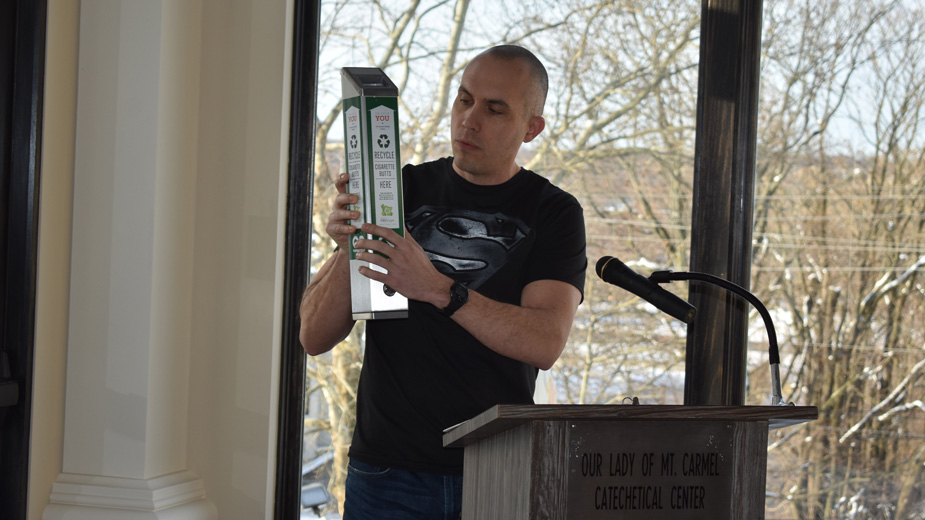 “Ideally, what we want to see is two or three of these on every block in downtown Youngstown,” Kidd said.

The Wick Park 5K will raise money toward improvements to the park’s running trail, while a grant from the Raymond John Wean Foundation will fund the tree replacement.

CityScape’s president, Pete Asimakopoulos, executive vice president and Youngstown market president with First National Bank of Pennsylvania, presented a $500 check to support Streetscape at yesterday’s breakfast. The bank also provides ongoing support, including downtown office space, to CityScape and has been a “cornerstone contributor” since the beginning.

“Pete is Superman,” Letson said. “With quiet grace and unassuming diligence, Pete has championed this organization on more occasions than I can count.”

Asimakopoulos, who called Youngstown an important market for FNB, said he was attending the breakfast in two roles.

“This program has done so much to beautify and stabilize our downtown,” Asimakopoulos said.

“It does make me feel super to be able to contribute to CityScape and be a part of this great work.”

“That work likely will never be done because we’re always wanting to improve,” he said.