Strumming on the Old Cigar Box at Bayou Blues

FARRELL, Pa. – Cigar boxes, pie pans and holiday cookie tins aren’t what you’d expect to see someone strumming music from, but for Ed Wentling, collecting these items and turning them into guitars is a hobby that has become a business.

Out of his basement here, Wentling hand-makes ukuleles, banjos and guitars, both electric and acoustic. The guitars range from one- to 12-string and are made out of anything from cigar boxes to wine boxes to soup cans. Among the more unusual items he has collected to make a guitar with are an ironing board from the 1920s and a bed warmer from the 1800s.

He started his business, Bayou Blues Guitars, in 2010 as a fluke, he says. After buying an electric guitar that was missing parts at an auction, he went on eBay to buy the parts he needed. While searching, he came across a three-string cigar-box guitar with a video link attached.

“I’ve never seen a three-string cigar-box guitar before so I watched the video and the guy blew me away with what he was doing,” Wentling says. “I got on YouTube and I started looking around and found out there’s a whole bunch of other people doing this. The more I watched, the more I got obsessed with it and two hours later I had to have one. So I built it.” 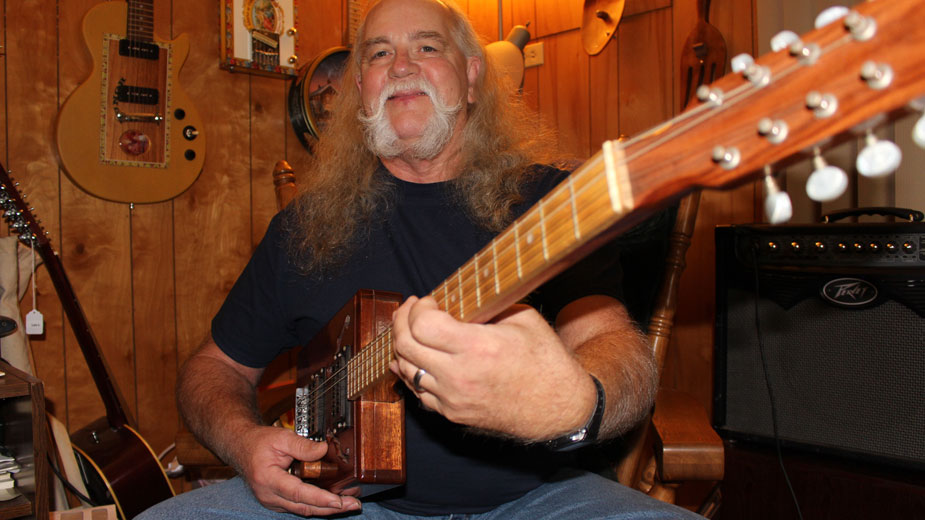 Ed Wentling discovered the craft of making guitars from repurposed products in 2010.

For most of his guitars, Wentling buys the strings and tuners from the store and hand-makes the guitar necks and fretboards.

After making his first cigar-box guitar, Wentling found the process enjoyable and wanted to make more. He was immediately hooked.

“Every guitar is a new experience of the difficulties of building it and then the act of trying to figure out how to fix what doesn’t work,” he says. “That’s what keeps me going at it, not knowing what’s going to happen until the end when you finally plug it in for the first time and you strum it and it’s either going to sound great or horrible.”

Most of the cigar-box guitars he makes are electric because they don’t usually sound good acoustic.

“They got everything going against them,” Wentling says of the cigar boxes. “They’re small. They’re flat. They’re square. Some are plywood and some are hardwood. You just never know what they’re going to be made out of.”

One of Wentling’s favorite guitars he’s crafted for himself is made out of a mahogany-wood cigar box with a rosewood neck and birdseye-maple fretboard. He added humbucker pickups, adjustable tuners and strings onto the guitar.

“But these are off of a 12-string guitar with the two-outboard saddles removed so that brings it into a four string and it resonates forever,” he says. “This was originally painted red, but the finish on it was horrible, so I sanded it off and stripped it and this is what was hiding underneath it,” he says pointing to the mahogany cigar box.

“Pretty much any kind of box,” he says. “I’ll take another amp that I’ve picked up somewhere else where the body of the box may be all junked out and I’ll scrap the box and put the amp into something like this,” he says as he holds up a leather suitcase. “It gives them a whole new sound again because now it has a different atmosphere to resonate through.” 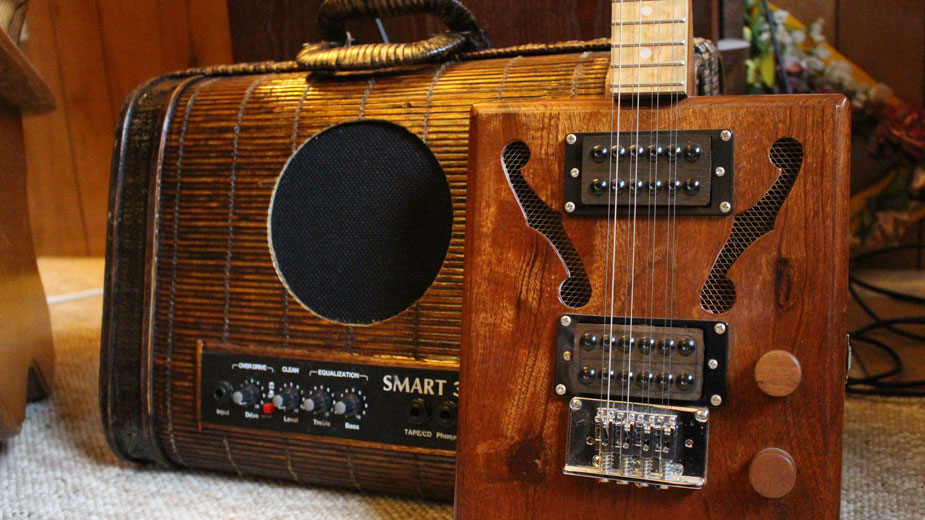 To complement his guitars, Wentling also makes amplifiers out of old suitcases.

Wentling works full time at a group home for special needs adults, but on his days off he spends up to 20 hours in his basement building amps and guitars. Each guitar can take anywhere from two to 260 hours to make.

“It’s a learning experience every time,” he says. “Every guitar I build is a unique, one-of-a-kind guitar so I never build them again.”

Another of Wentling’s favorites was for his neighbor, Jerry Graham, a watercolor artist. Among Graham’s paintings was one of two soldiers, with one comforting the other. Wentling had Graham’s wife, Lori, email him a copy of the picture and he put the picture onto a cigar box and built a guitar out of it.

On Christmas, Wentling surprised Graham with the guitar. “He was really shocked and surprised,” Lori Graham says. “My husband was so excited.” 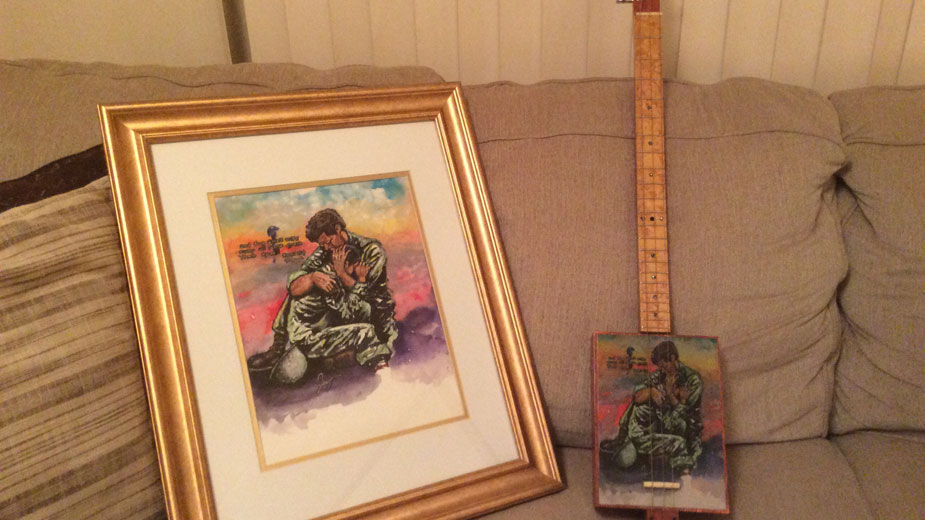 Pictured: Jerry Graham’s artwork sits next to the cigar-box guitar with his picture on it, which Ed Wentling made for him as a Christmas present.

Wentling numbers each one of his guitars he makes and is close to reaching 400. Jay Lopshansky of Leetonia has No. 112: an electric cigar-box guitar with a maple neck.

“The first time I came across Ed and his guitars was at the YSU [Summer] Festival of the Arts,” Lopshansky says. “I’m a guitar player so when I ran across his guitars, I had to sit down and play a few. Next thing you know, I bought one.”

A member of local band 1264, he travels with his cigar-box guitar to every gig and says it plays as great as the day he bought it.

“They’re not toys or hang-on-the-walls display pieces,” he says. “These are quality guitars.”

Bayou Blues Guitars range in price from $75 to $1,000. A majority of Wentling’s sales occur at festivals, though they are also available online at BayouBluesGuitars.com.

“Guitars are something that have to be seen, felt, played and to buy one online is really difficult to do,” Wentling says. “You can take any one of these and pull them down and play them but they’re all going to sound different.”

Some of his favorite shows to sell his guitars at are the Summer Festival of the Arts at Youngstown State University, Applefest in Franklin, Pa., and the Gypsy Soul Vintage Market in Fort Wayne, Ind.

“He had some of his guitars and I never saw them before so I sat down and started playing and I must of played every guitar,” Mondak says. “After that a lot of the events he went to, he would tell me about and I would go and demonstrate a lot of his guitars.”

Mondak asked Wentling to make a custom-made cigar-box guitar with a synthesizer pickup on it. The guitar plays like a regular one, he says, but can also play synthesized sounds. Mondak handpicked the box he wanted to use and designed the neck he wanted attached.

“Every one he makes is somewhat unique because of the wooden cigar box,” Mondak says. “He can make the neck and carve it by hand too and that’s the art.”

Ripper visited Wentling at his house where he was able to pick out which box he wanted to use, as well as what type of neck and wood finish he wanted.

“He does a really good job and is very helpful and sends you pictures along the way to make sure it’s coming out the way you want it to,” Ripper says.

“It was fairly quick for a custom guitar,” he says. “For people who are in the music industry or just like to play music in general, it’s definitely something different and worth trying and he’s the guy to go to.”

Wentling says his guitars are popular because they’re not the norm.