Students Learn the 3 R’s on iPads and Other Technology

YOUNGSTOWN, Ohio – When students arrived at Chaney High School and Rayen Early College Intermediate School on the first day of class, they were each handed an iPad. Each teacher received a MacBook, an iPad mini and an Apple TV, along with a projector to use with it.

But for students to be job-ready after graduating from high school, the Youngstown City School District, as well as other local schools, are integrating more technology into the classroom.

Chaney and Rayen Early College received a $1 million grant from Apple to supply the school with the technology it needs over a three-year period, which started at the beginning of the 2016 school year. In spring 2019, “We’ll have to figure out our budget to find whether we continue with Apple devices or switch them over to Chromebooks,” LaPlante says.

For the 13 other schools in the district that aren’t part of the Apple grant, technology in the classroom is emphasized just as much with the costs factored into the district’s budget.

“We have a lot of kids who come from very challenging environments so as much as we can help, we do,” LaPlante says. “We do our best to provide that access to that technology that all of our kids need.”

Students from kindergarten through third grade share iPads, with one for every three students, while students in grades three through 12 are given their own Google Chromebook to use.

IPads are given to the younger students because, “Some of them have motor-skill issues so it’s easier for the students to use. Plus the program that we purchased for [grades] K through three is iPad-based software,” says Tiffaney Trella, technology integration supervisor.

One of the many programs used on the iPads is eSpark. A lesson on eSpark helps kindergartners differentiate colors by asking them to sort a variety of pictures on the screen into a box labeled with the correct color of the picture.

Among the programs older students use on their Chromebooks is ThinkCerca, which covers science, social studies and English. ThinkCerca will provide a student with current news stories based on the subject and what is of interest to the student. The student will read the story and then write a summary and take a reading comprehension quiz provided by the software company on the Chromebook. The teacher can then give feedback through the program.

LaPlante can analyze data from each of these programs and tie it to student performance to determine what programs are enhancing student’s learning experience better than others.

“We will see if there are individual buildings or grades or teachers that are doing better in one area than in ones doing maybe not so good,” he says, “so that we can then have lessons learned between buildings and teachers.”

The amount of time students spend using the technology varies from classroom to classroom since the teachers are the ones who decide how it will benefit their students, LaPlante says.

“We look at technology as a support to the teacher. Whatever they tell us they need, we do our best to provide. We don’t try to tell them what they need in their classroom,” he says.

Diane Herdman recalls when she started teaching sixth- through eighth-grade English eight years ago, she would have to send a letter home to the student’s parents to communicate with them on how their child is performing.

Now at Wilson Elementary, she can walk to her laptop and send parents a note on their child’s performance through ClassDojo. “Most of the parents have access to the internet in their homes,” she says. “They may not have a laptop or Chromebook, but they all seem to be able to respond using their smartphones.”

ClassDojo is a classroom communication app used to share reports between parents and teachers, as well as students and teachers. “I can assign awards and points to the students if they do something positive or I can take away points if they do something negative,” Herdman says. “We invite parents so they can log on and see what their child is doing.”

Marc Ellis is starting his second year as a third-grade teacher at McGuffey Elementary after leaving teaching for 10 years.

“When I left 10 years ago, we were just getting smart boards but they look nothing like they do now,” he says. “I really didn’t have technology in my classroom before.”

This year, Ellis says he is getting a new Promethean interactive board in his classroom, which is a large whiteboard that can be used as a touchpad and display any program on his laptop for the entire class to interact with. 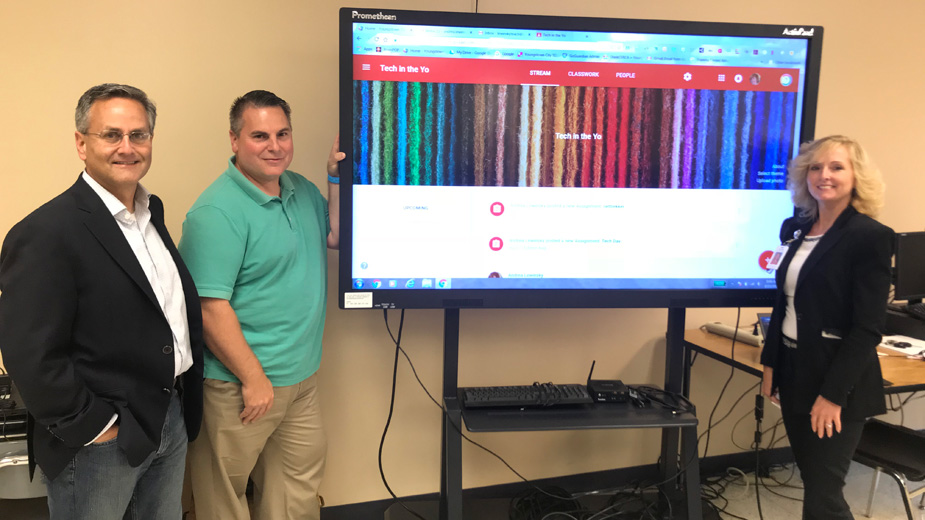 Pictured: John LaPlante, CIO for the Office of Information Technology; John Hopkinson, coordinator of technology support and installation; and Tiffany Trella, technology integration supervisor for the Youngstown City School District with an interactive display board that is used in the classroom.

“Last year I would have the kids come up to the interactive board and have them write answers to some questions together before going into groups to work on them,” Ellis says.

Then the students would get into groups to work on a lesson whether on their iPads or Chromebooks depending on the program in use, since third graders use both in the Youngstown City School District.

“Every single profession we’re preparing our students for is going to involve technology someway, so we need to teach our kids how to use it correctly,” Ellis says.

The integration of technology into classrooms began seven years ago for the Boardman Local School District when Todd Smith joined the technology department.

“When I came in, we did a survey on where we were in the district and basically we weren’t at the best place,” says Smith, science, technology, engineering, arts and mathematics coach for the Boardman Schools. “We had technology, but most of it wasn’t working.”

Smith developed three phases to get the school district to where it should be. The first was to get teachers technology and make them comfortable with it, while the second step was getting it into the hands of students.

“The third phase is transitioning from a teacher-directed class to a student-centered classroom. And we are trying to do this with the assistance of technology where it is necessary,” he explains.

The Boardman schools have since transitioned from being PC-based to using Chromebooks and supplying every classroom with an interactive board. Today there are 5,000 devices in the district’s seven schools for 4,200 students in the district and 270 wireless access points.

As the fourth-grade students from last year start fifth grade this year, they will already know how to use all the G Suite apps on the Chromebooks, Smith says, such as Google Sheets, Google Docs and GMail.

“Things that kids were doing in eighth grade, they’re now doing in elementary school,” adds Jared Cardillo, director of instruction for Boardman Schools. “Everything filters down. Technology keeps sliding down and you have to keep up with it.”

The technology in the schools goes beyond computers and interactive boards. Students are now being taught robotics, coding, artificial intelligence, machine language, and augmented and virtual reality.

This year, ninth-grade students in the Boardman district will be doing a study for their physical science class on the size of car wheels and how they affect speed. Students will compete to create the fastest toy cars, using a computer-aided design program to create wheels before using a 3D printer to make the wheels.

“The teacher is the expert and knows what needs to be covered. So the teacher makes that determination on how technology is used in their classroom,” Cardillo says. “If there’s an interest, we try and tap into that.”

Tim Harker has been a teacher for 23 years, but it wasn’t until five years ago he decided to fill the position needed for a full-time technology teacher for seventh and eighth-grade students at Glenwood Junior High School.

“It gives the kids another option. If they’re not into sports or being a musician, this is another thing for some kids to get into,” Harker says.

Three years ago, Harker started a makerspace club for anyone interested in creating and designing materials using the tools he provides.

“I have everything from six 3D printers, CAD software, drill press, bandsaw, scroll saw, Legos – all kinds of stuff,” he says.

The club is open Tuesday mornings before school and Thursdays after school. “Last year I had about 75 kids sign up and I had 30 kids who came regularly,” he says.

“All our teachers want to do what’s best for the kids,” adds Cardillo. “If that’s using technology or learning a new program, they do it. They want tools in their toolbox and they want kids to learn.”