SHARON, Pa. – For the team from Greenville Junior/Senior High School, the hardest part of telling the story of Ilsco Extrusions Inc., was sorting through the abundance of interesting information.

“We had a half-hour worth of interviews that we then had to cut down to 2 1/2 minutes,” said Matt Gehly, a teacher at Greenville and the team’s coach.

Greenville was one of nine schools from western Pennsylvania to take part in this year’s What’s So Cool About Manufacturing? video contest. Each school was paired with a local manufacturer and tasked with making a video about who they are and what they do.

The students began working on their projects in October. The videos were then posted online so the public could view them and vote for their favorite, with a total of 14,980 votes cast.

The team from Sharpsville Area Middle School won the Viewers’ Choice award with 3,494 votes. Their video, along with the other entries, can be watched here.

“We tried to get creative with what we were doing because you’re trying to get people to vote for you,” she said

The students and manufacturers were honored for their hard work at an awards gala Thursday night at Penn State Shenango.

Rylan Walber, a student at Greenville, said the project was challenging, but ultimately worth it because, “there is a lot of cool stuff about manufacturing that people should know about.” 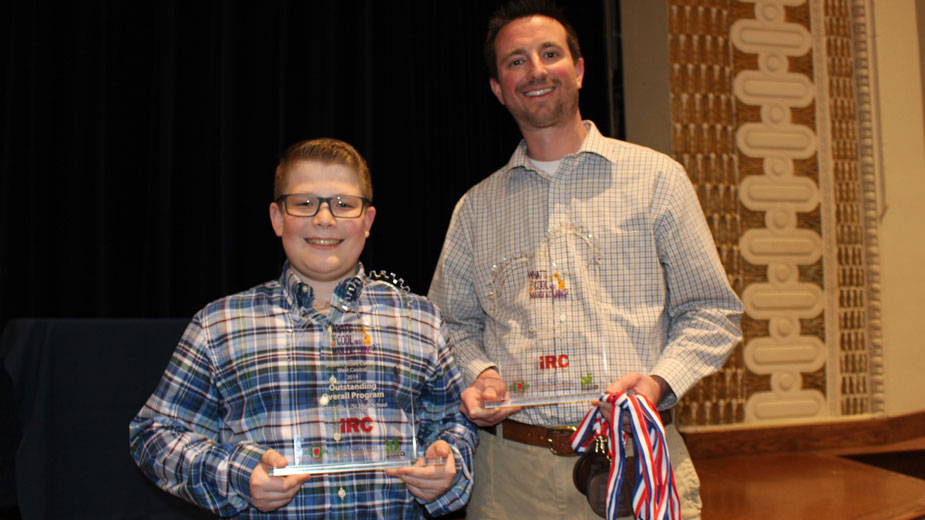 Rylan Walberg and Matt Gehly from Greenville Junior/Senior High School, which won the awards for Outstanding Editing and Overall Program.

Bob Zaruta, president and CEO of the Northwest Pennsylvania Resource Center, which directed the program, said the goal is to increase awareness of opportunities in manufacturing, not just for students, but also for their parents and the broader community.

“With the rapidly changing advanced manufacturing technology there’s a lot of opportunities for young people to explore and to look at careers within manufacturing.”

And, he said, those opportunities are even better in the northwest region of the state.

“In northwest Pennsylvania, manufacturing is twice what it is in the state and the nation when it comes to output and Gross Domestic Product, ” Zaruta said

This year’s What’s So Cool About Manufacturing? program held 15 such competitions across Pennsylvania with 250 school/manufacturer teams. This is the programs second year in the west-central district, and it’s sixth year overall.

Randy Seitz, president of the Penn-Northwest Development Corp., told the audience that high school students who aren’t college bound and don’t want to enter the military often find themselves “getting ready to graduate and they’re in panic mode. We want to change that.”

Part of making that change is getting people to understand that the environment in a manufacturing plant today is much different than it once was.

Entering the manufacturing industry is also much cheaper than what one would pay for a typical college degree said Scott Covert, an instructor with Penn United Technologies, a manufacturing solutions provider based in Cabot, Pa.

“A lot of companies now are offering tuition reimbursement. We want you to be educated. We’re going to pay you to go back to school,” he said.

Covert also told the audience that manufacturing is “cool,” and “encompasses almost everything in our lives,” and you don’t have to go far to see it.

As an example, he asked the audience if they noticed the American Flags on the back of Team USA’s jackets at the Winter Olympics.

“You know what that flag actually was? It was a heater. There’s a company in Butler County called Butler Technology that used printable circuitry to make those jackets,” he said.

The same company is also making K Cups for Keurig coffee machines with medicine in them so people who can’t take pills can take their meds with their coffee.

“These are the cool things that are happening in western Pennsylvania,” he said.

The West Central region of this year’s competition included these teams and manufacturers:

In addition to the Viewers’ Choice, five other awards were given.

By NICK HILDEBRANDGCC Senior Editor, Marketing and Communications GROVE CITY, Pa. – With the completion last year of a $9 million renovation of Henry Buhl Library, Grove City College demonstrated that it is possible to preserve a campus landmark while…

SHARON, Pa. – After returning to regular operations in 2022, Penn State Shenango will focus on the overall student experience this year. “We’re working hard to give students in the Shenango and Mahoning valleys incredible opportunities,” says  Campus Director Jo…