NORTH LIMA, Ohio — Ken Timmings might not immediately benefit from the Summer Manufacturing Camp his company, KTSDI Vehicle Solutions, hosted Monday, but he recognizes the importance of such programs for the future of industry.

“If we don’t plant the seeds from kindergarten onwards we’ll never reach these kids once they reach eighth grade through high school,” said Timmings, manager at KTSDI, which manufacturers specialized vehicles and components for companies like Caterpillar and has worked on special projects for NASA.

During Monday’s camp, 15 fourth through eighth graders studied alternative energy through practical applications, including geothermal, wind and solar. KTSDI, the Mahoning County Career and Technical Center, the Boardman Middle School science department, Inventor Cloud and Allen-Bradley Rockwell Automation set up learning stations with different experiments, including one that showed how to use geothermal power to run a water pump.

Much of the day’s work revolved around science, technology, engineering and mathematics, or STEM.

“We are learning about manufacturing things with solar power. Once we built a watch that ran off of solar power,” said Lucy Papini, a student from Boardman.

Students attend the camps through partnerships with organizations such as Oh Wow! The Roger & Gloria Jones Children’s Center for Science & Technology and the YWCA of Youngstown. Monday’s camp is one of 19 five-day camps in 15 Ohio counties scheduled this summer.

Since 2013, U.S. Sen. Sherrod Brown, D-Ohio, has worked with organizations such as the Valley STEM + ME2 Academy and MCCTC, and manufacturers like KTSDI to sponsor the camps. Brown was on-hand for Monday’s camp to visit with the students.

“Everybody wants more manufacturing in the United States, but nobody wants their kids to do it,” Brown said. “What these kids are seeing here is that manufacturing is high technology, it’s good working conditions and a good way to make a living.” 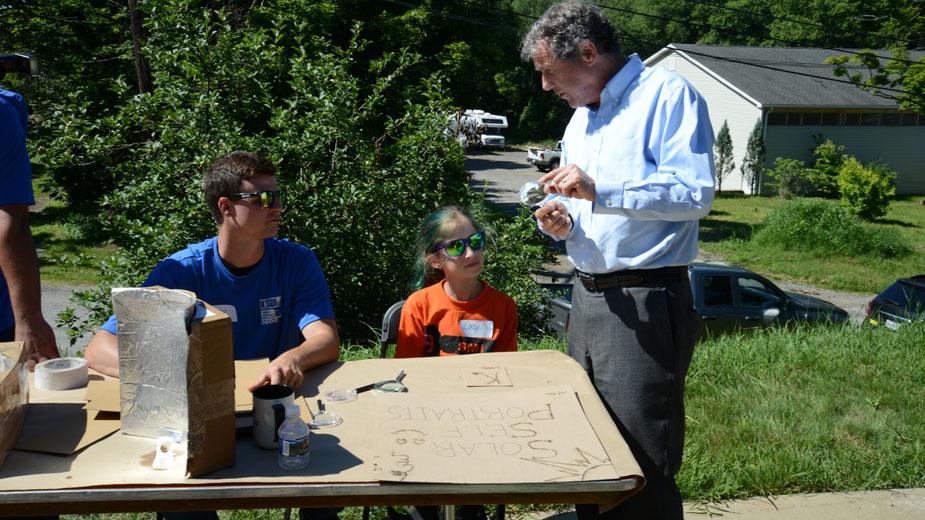 The program, now in its sixth year, exposes students to opportunities that they or their parents might not have thought about, and “that making things is honorable work,” he said.

The program looks to the long term, he said, not just to train the young, but also to get them interested in invention and all the things “young minds are open to.” The program has sponsored some 60 camps thus far.

“Although these kids aren’t ready to go to work yet, some of them will end up wanting to become welders, carpenters, engineers or maybe attend Eastern Gateway [Community College] and become technicians,” he said. “Parents may think that manufacturing is old fashioned, rusty and dirty, but these kids are seeing that this is a new kind of manufacturing.”

Though the focus at the camp was on renewable resources, not all learning stations were geared toward alternative energy. Valley STEM + ME2 Academy brought its mobile unit that features a virtual flight simulator and robotics learning tools. The academy partners with universities and industries that use modern technology and have a need for skilled students and workers.

“They also have had workshops on how cars and houses are built,” Brown said. “It’s just one day here and then they will move on to visit other manufacturers, and maybe even talk with some engineers.”